On June 25, 2019, I wrote that silver’s day is coming, and urged readers to get ready for it. On July 11, I pointed out that silver had not yet broken out with gold, and was a relative bargain.

The most common response has been to ask: “When will silver catch up with gold?”

To which I have three answers:

1] I don’t know. (And I would be very skeptical of anyone who said the did.)

2] Silver will more than catch up with gold; it will soar higher.

3] Whenever it starts, you won’t want to miss it.

I’m writing now to alert you that silver’s big rally may be starting.

In fact, silver outperformed gold in each of the last three trading days. As you can see in the Kitco charts below, gold had a great Wednesday, but silver is having a great week. 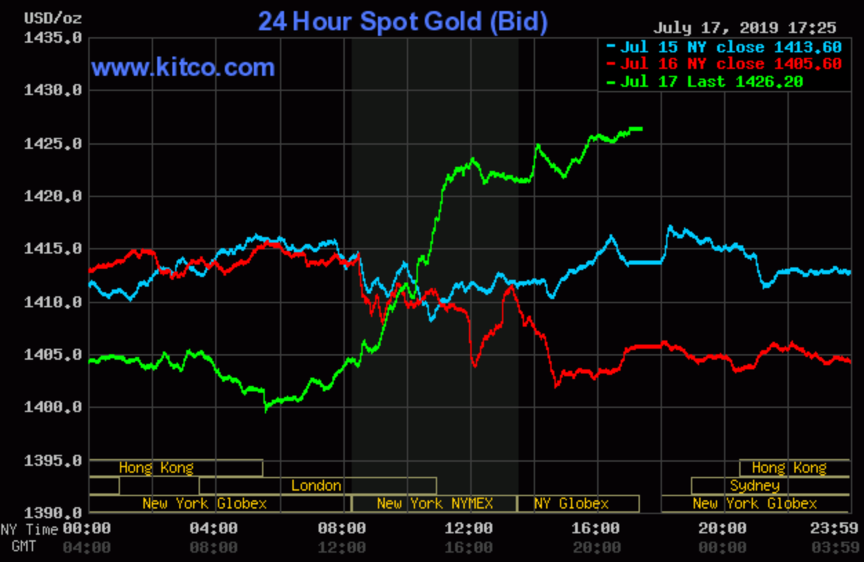 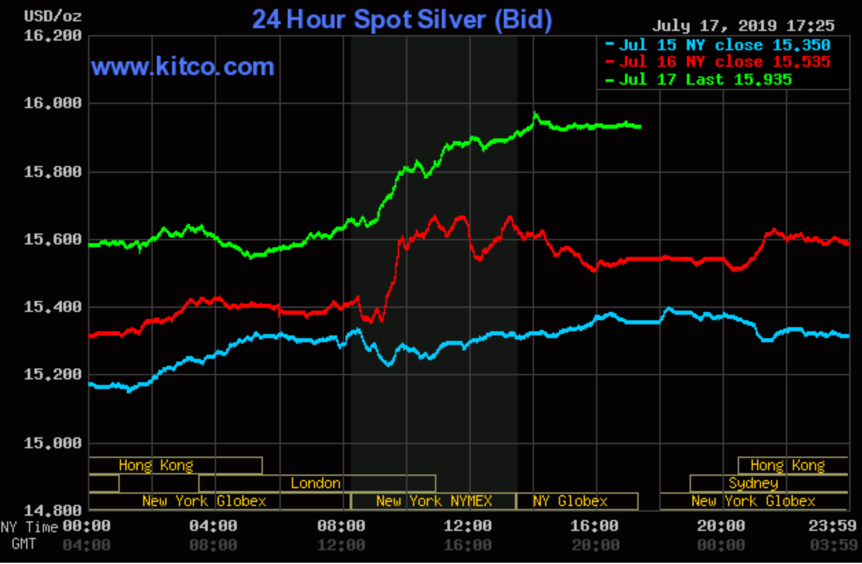 Now, three days of trading action is not enough to prove to me that there’s been a lasting change in the market.

Let me be as clear as I can:

1] I’m not claiming I know that silver is about to really take off.

2] There is a very real risk of gold retreating if it becomes clear that the Fed won’t hike rates this month as expected.

3] If gold drops, silver will plummet fast and furiously—it’s always been more volatile.

4] Silver stocks are even more volatile than silver itself. Several I track were up by double-digit percentages today—four to five times more than the change in silver itself. But this cuts both ways.

5] In sum, buying into silver now could result in substantial near term losses.

That said, market conditions now seem similar to me as those prevailing the last time silver went into one of its mini-manias, in 2010–2011. At the time, precious metals were rising. But the real key was that silver is largely a byproduct of industrial metal mines, and bad economic news created negative expectations for that output.

In addition, pundits of all sorts are recognizing that there’s good reason to be bullish on gold this year—and that silver is still a relative bargain. Even the Wall Street cheerleaders on Yahoo Finance charted this in their “Final Round” show this afternoon. This kind of attention could bring in a flood of new buyers to the silver market.

On top of this, silver remains near record-low prices relative to gold. Industry insiders have been waiting for the ratio to return to more normal levels. That’s usually interpreted as positive for silver prices. This could create a wave of FOMO buying once silver really gets going. As a reminder, here’s that chart showing what happened to the gold-silver ratio the last two times silver went into a mania (the previous one was in 1980). 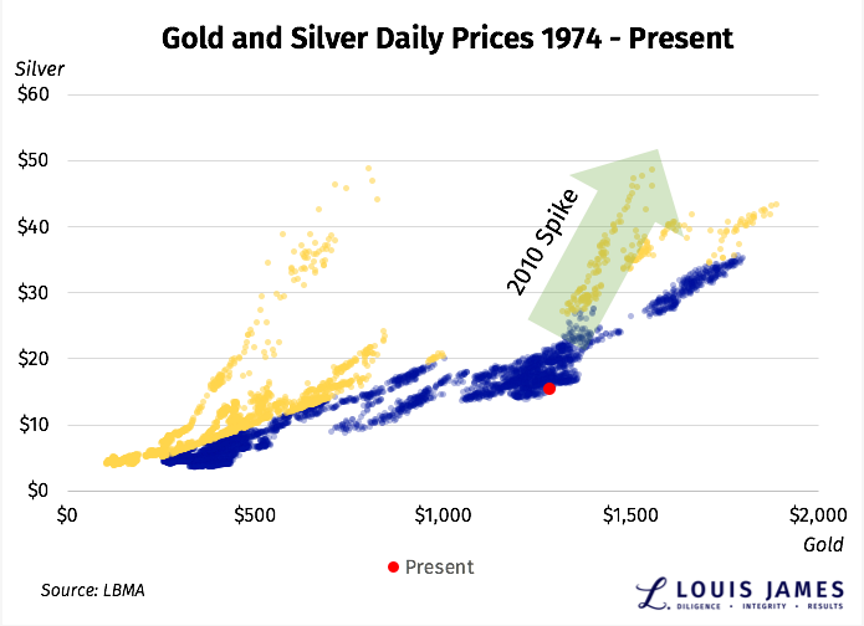 Note that in both of the spikes charted above, silver rose to the $50 range. Given all the money-printing that’s happened since then, I think silver could easily exceed prior nominal peaks in its next peak. But we don’t need that to happen in order to make a bundle. Sustained silver prices at just $25 per ounce would be a game-changer for a lot of silver companies—with dramatic consequences for their share prices.

Seeing the potential for this, I just wrote a review of 20 silver stocks I’m tracking—including my favorite—in the current edition of The Independent Speculator. You’re welcome to subscribe to get my take.

But the main takeaway is this:

If we’re seeing the start of the next silver mania—and this would be just the beginning—the potential upside is vastly greater than the possible downside.

That idea I give you for free. The devil, of course, is in the details. For a deeper dive into the precious metals breakout of 2019, I urge all who have not yet done so to read my free report, Gold Breakout: It’s Not Too Late.