Yesterday, Fed Chair Powell’s testimony in Congress sent prices on just about everything higher. Happy days again… But if fortunes are made buying low in order to sell high, which assets qualify as the best “buy low” opportunities today?

Well, seeing the green across the board reminded me of the old “one of these things is not like the others” skits I saw as a child on Sesame Street.

I tweeted the image above, asking: “which are near all-time highs and which is just coming out of a multi-year bear market?”

Anyone who thinks that piling into high-flying Wall Street market darlings today is buying low is delusional.

But I don’t think many do. I think most are aware that they’re buying high and hoping to sell higher. This is not value investing. It’s pure FOMO.

To be fair, anyone who bought the major US indices yesterday was sitting on gains today as I started writing this article this morning. Some would have been underwater again by the time it was proofed this afternoon. But chasing momentum can work. Some lucky folks have gotten rich doing so.

I’m not saying that the Fed’s reassurance that investors will get the easy money they crave won’t send mainstream stocks higher… for a while, at least.

The problem, of course, is that buying high and hoping to sell higher is betting against the odds. It’s taking the slender chance than an extraordinary price will get even more extraordinary. In the real world, in time, the odds always favor prices falling back toward more objective valuation. AS the saying goes, markets may be voting machines in the short term, but they are merciless weighing machines when all is said and done.

The specific, huge risk today is that the bad news that’s prompting the Fed to ease monetary policy really is bad news.

Me, I’d rather look for opportunities to buy low. It takes courage to buy assets so out of favor that they really are cheap. It’s doubly so in an era of easy money. But knowing that the odds favor low prices rising toward objective valuation gives me that courage.

You know, for almost 15 years, I’ve been writing that “buy low, sell high” is easier said than done. Most people take that to mean that timing markets is difficult. But that’s not what I mean at all—nor is it what I do.

Buying when prices are objectively very low isn’t timing the market. It’s real value investing. And it’s extremely difficult for most people to do.

Almost no one has what it takes to following Baron Rothschild’s dictum that the best time to buy is when there’s blood in the streets.

My friend Doug Casey may be the only person I know who’s actually traveled to war zones to see what was for sale.

Fortunately, we don’t have to go to such extremes. And if we did sit around waiting for blood in the streets, we’d miss a lot of excellent opportunities to buy reasonably low.

Despite their recent pop, I think precious metals qualify for as “reasonably low” today.

Far from making record new highs as the Dow, S&P 500, and Nasdaq have just done, gold has merely broken free from the grip of the bear that’s held it for more than five years.

And if I’m right that gold has more upside ahead than downside, then silver is an even better opportunity to buy low. 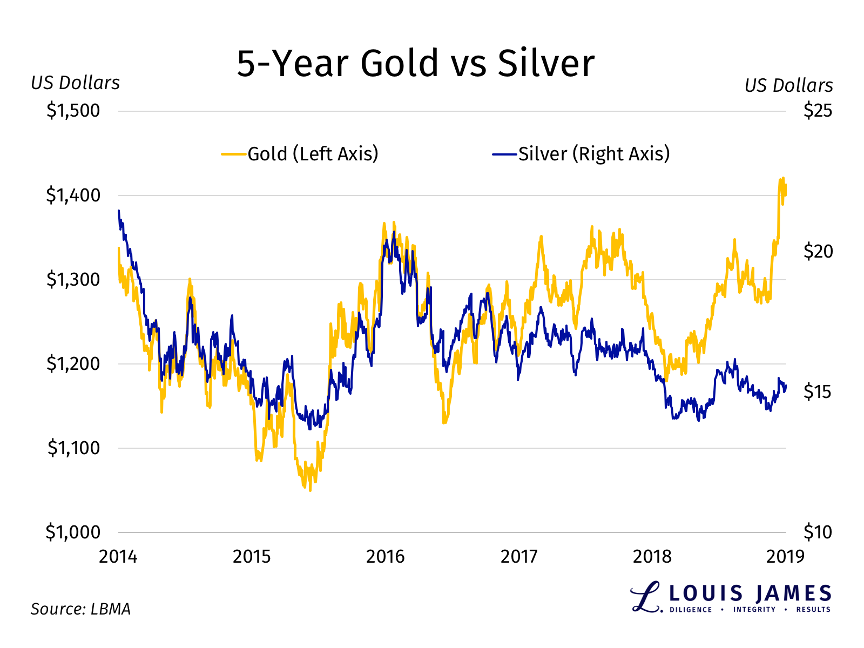 As you can see, while gold has broken out, silver is still very much on the low end of its five-year range. Oddly enough, my first big win as an independent speculator was a silver stock that almost doubled last year. Researching my next big win in the silver space is one of my highest priorities today.

Ideally, gold and silver will correct and consolidate a bit more before heading much higher again. I’d love to be able to pick up some of the stocks on my radar at lower prices. Readers of The Independent Speculator will be the first to know when I take the plunge.

That said, don’t have a one-track mind about gold—nor a two-track mind, counting silver. For instance, I think there is a lot of money to be made in the industrial minerals that are facing supply deficits, especially the ones needed to power the new energy paradigm. I’d even say that they are, as a group, relatively cheap.

However, unlike precious metals, which may or may not correct in the near term, I think it’s highly likely that industrial minerals will face mounting downward pressure this year, and perhaps next as well.

That’s because the bad economic news that’s prompting the Fed to ease monetary policy is clearly and directly bad for industrial commodities prices.

I must also say, frankly, that I was wrong when I thought the US and China would be in a hurry to end the trade war. Despite the recent extension of the cease-fire there, it now seems that neither side is very interested in real compromise. It’s a fair question to ask if a new agreement is even possible, given everything the US wants China to do. And the trade war is a major drag on industrial minerals prices.

This is one of those cases in which I don’t want to try to catch a falling safe. I’ll let it smash, and then pick up the valuable pieces at fire-sale prices.

So, What’s the Best Opportunity Today?

None of the above is the best opportunity to buy low today; that’s uranium. 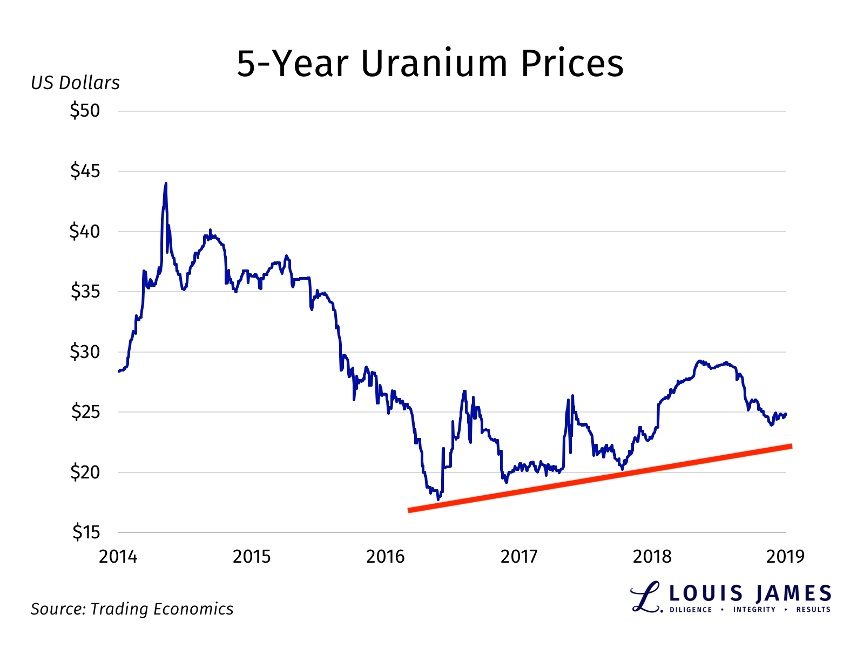 As you can see, uranium is on an upward trend. What you may not know is that it’s still so cheap, supply will dry up if prices don’t rise dramatically. Other writers and I have spilled a lot of ink making this case, so I won’t repeat all that research here. Here are the basic points:

Much higher uranium prices—easily double or triple today’s prices—are a “when” question, not an “if” question.

And the prices of the best uranium stocks offer high leverage to the underlying commodity. This is the stuff four-digit gains are made of.

That makes uranium plays the best opportunities on the market today to buy low in order to sell high later.

And that’s why three of the last four stocks I’ve bought have been uranium plays.

Well, that’s what subscribers to The Independent Speculator pay me to tell them.

But you have my take on what’s the best opportunity to buy low today. You’re welcome to go it alone. I’m content to hope that if I’m right about this, you’ll remember my guidance, and seek it out in the future.