I’m as bullish as anyone about the price of gold and silver. But with gold within kissing distance of $1,900 and an all-time-high as I type, some folks holding large, unrealized gains are wondering when the top will be.

And how will we know?

As a rational, disciplined speculator, I have to say that we’ll only really know in hindsight.

But that doesn’t mean we’ll have no idea.

I was taught by some of my mentors in this space that stocks tend to lead the metals on the way down.

I’ve only been through one such major bear mauling in my career, so I can’t say I’ve seen this pattern play out repeatedly—but it sure did with a vengeance in 2011. 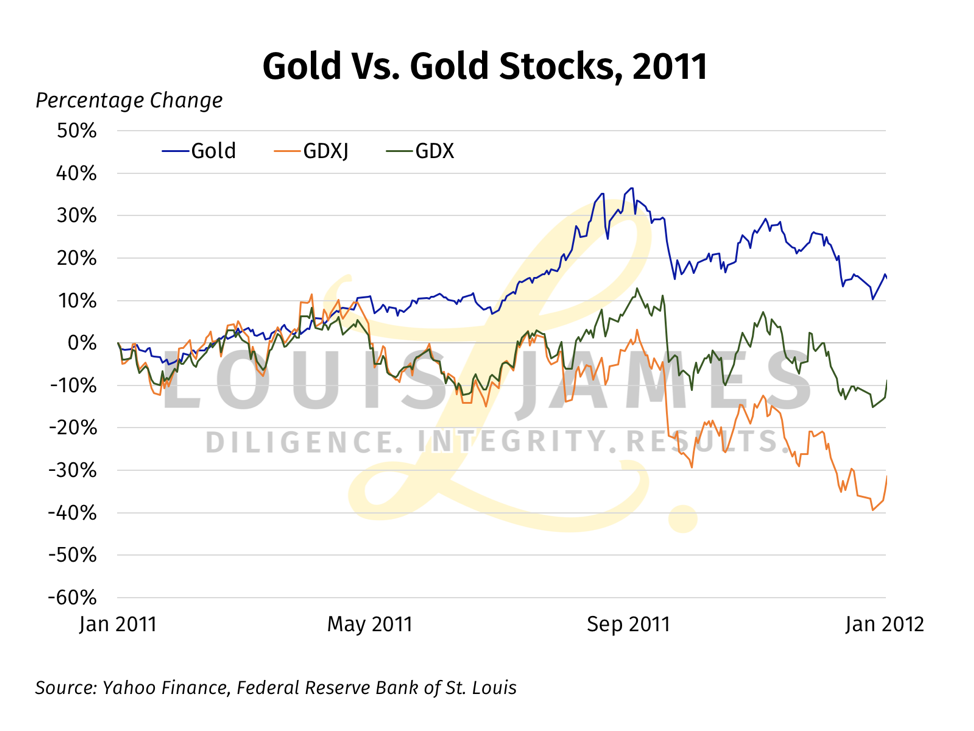 As you can see, gold stocks started their major, multiyear retreat in April–May of 2011, while the metal itself didn’t go on to peak until September of that year. And no surprise, the smaller companies included in the GDXJ ETF sold off much harder. That’s not just because they’re more volatile—though that’s absolutely true—but because the majors in the GDX were still making great money while gold was up near record highs in H2 2011.

But even the majors gave way as gold failed to reach new highs in 2012… even though the price of gold remains well above where it started in January of 2011. 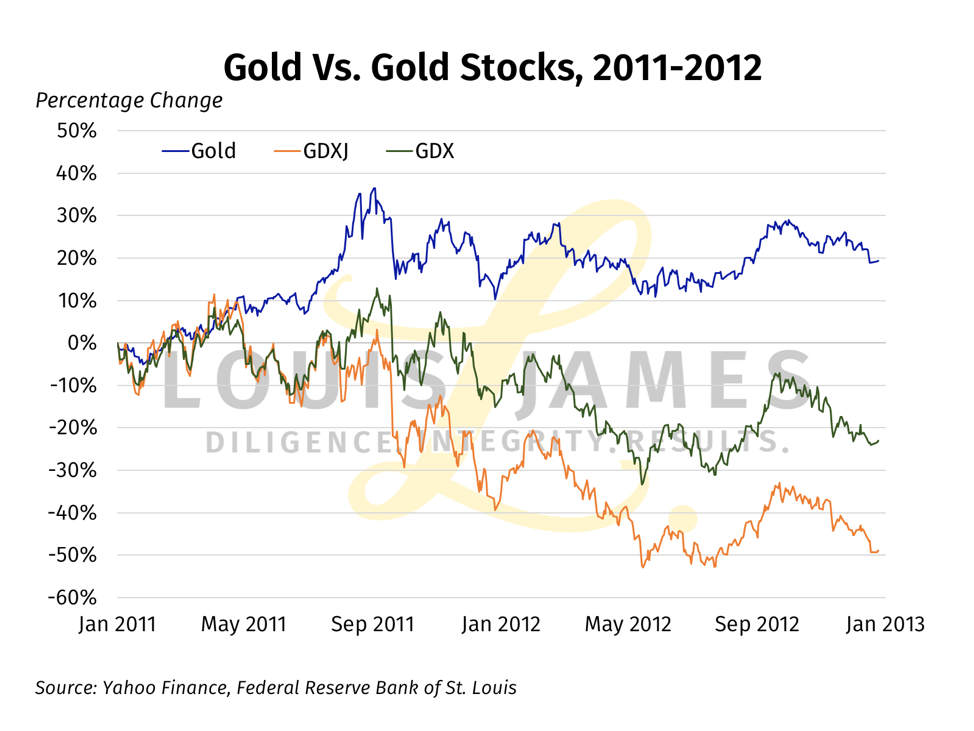 Resource investors call this type of pattern “alligator jaws” because the jagged upper and lower lines look like an alligator’s teeth. But also because the increasing difference between the price of the underlying commodity and the stocks suggests that the jaws much snap shut at some point. That’s true, but it can happen by the upper jaw dropping or the lower jaw rising—so unwary investors can get hurt jumping in and guessing the direction wrong.

In this case, it just got worse and worse until the bottom in late 2015. 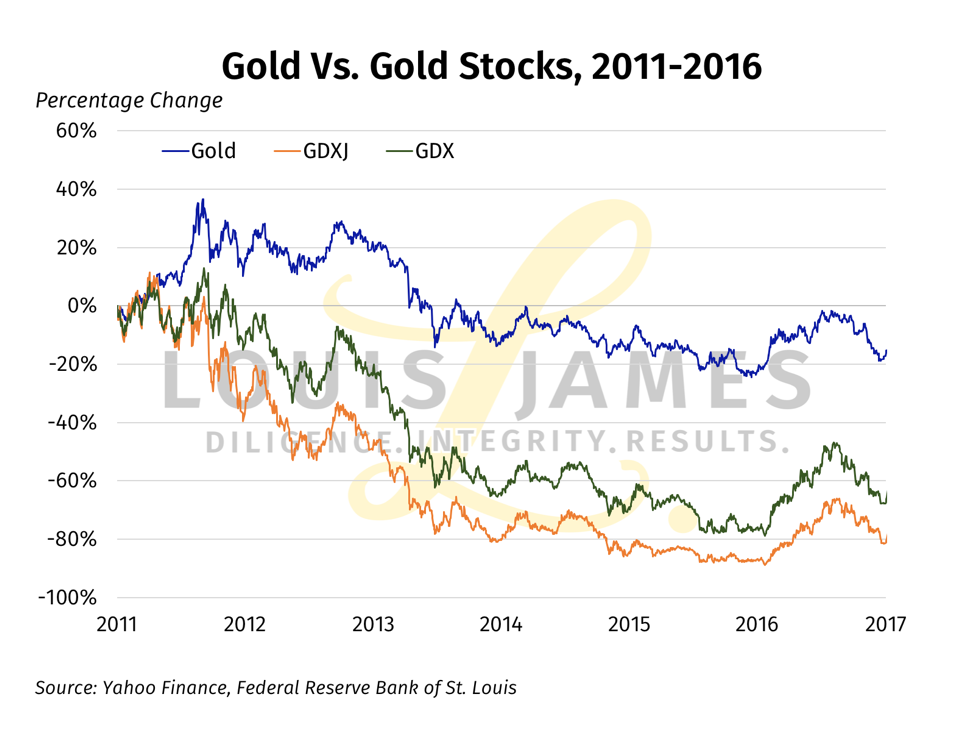 I’ve included the 2016 “head-fake” rally. It sure was painful for those of us in this space to see that fade away. But there was so much money on the sidelines at that point, it generated some huge gains for those brave enough to buy at the bottom—and to lock in their gains.

So, what are gold stocks telling us about the gold market today? 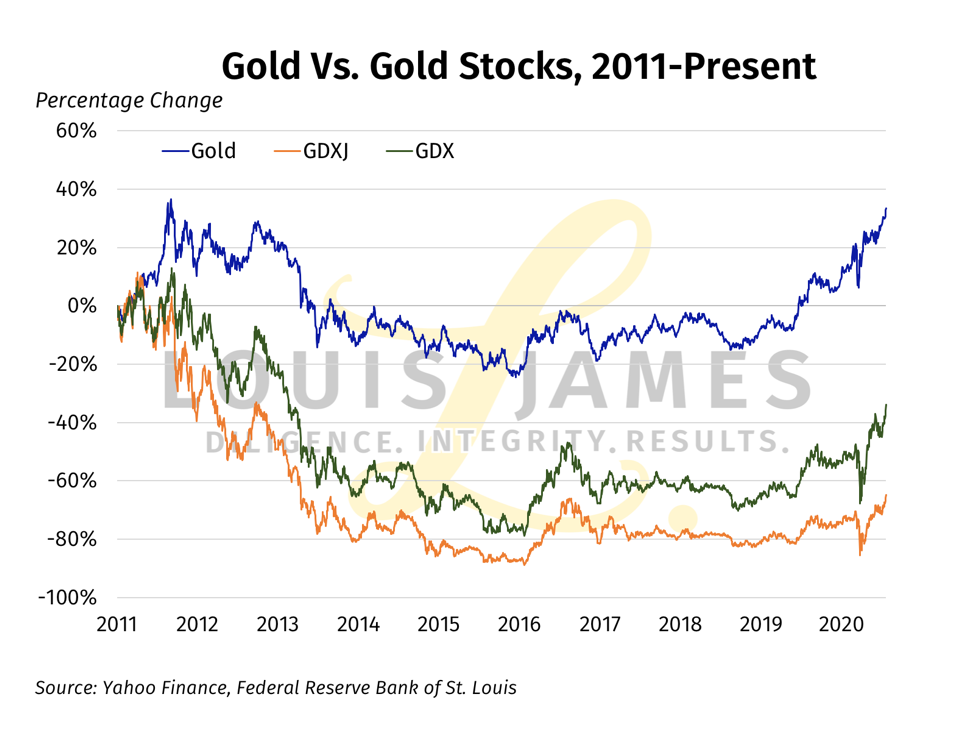 Gold stocks are still rising today, but there’s still a long way to go before the lower jaw catches up with the upper jaw.

So, while I don’t want to chase stocks on days they’re going vertical, I’m not done buying—not by a long shot.

Silver is proving all the “it’s just an industrial metal” naysayers wrong this year.

And there’s another well-known pattern in monetary metals: gold leads silver, but silver more than catches up and climbs even higher before peaking. This has been the case in every major bull rally for gold and silver since Nixon took the US off the gold standard in 1971, freeing the price of gold in the process.

Given this 100% track record, that fact that silver hasn’t risen as much as gold yet tells me that the peak for both is still ahead.

And, as I’ve already written, the global economy after the COVID-19 shutdowns could really light a fire of historic proportions under the price of silver.

Best of all, because silver does still have an industrial side, I see better chances of pullbacks creating buying opportunities in the silver space.

We may yet have one last, great chance to buy silver stocks low before they go through the roof.

I can’t promise that. I don’t have a time machine. But if you ask what I’m doing with my own portfolio, this is it: I’m building cash in order to take advantage of the market’s next wild fluctuations.