Well, let’s have a look, starting with the big picture… 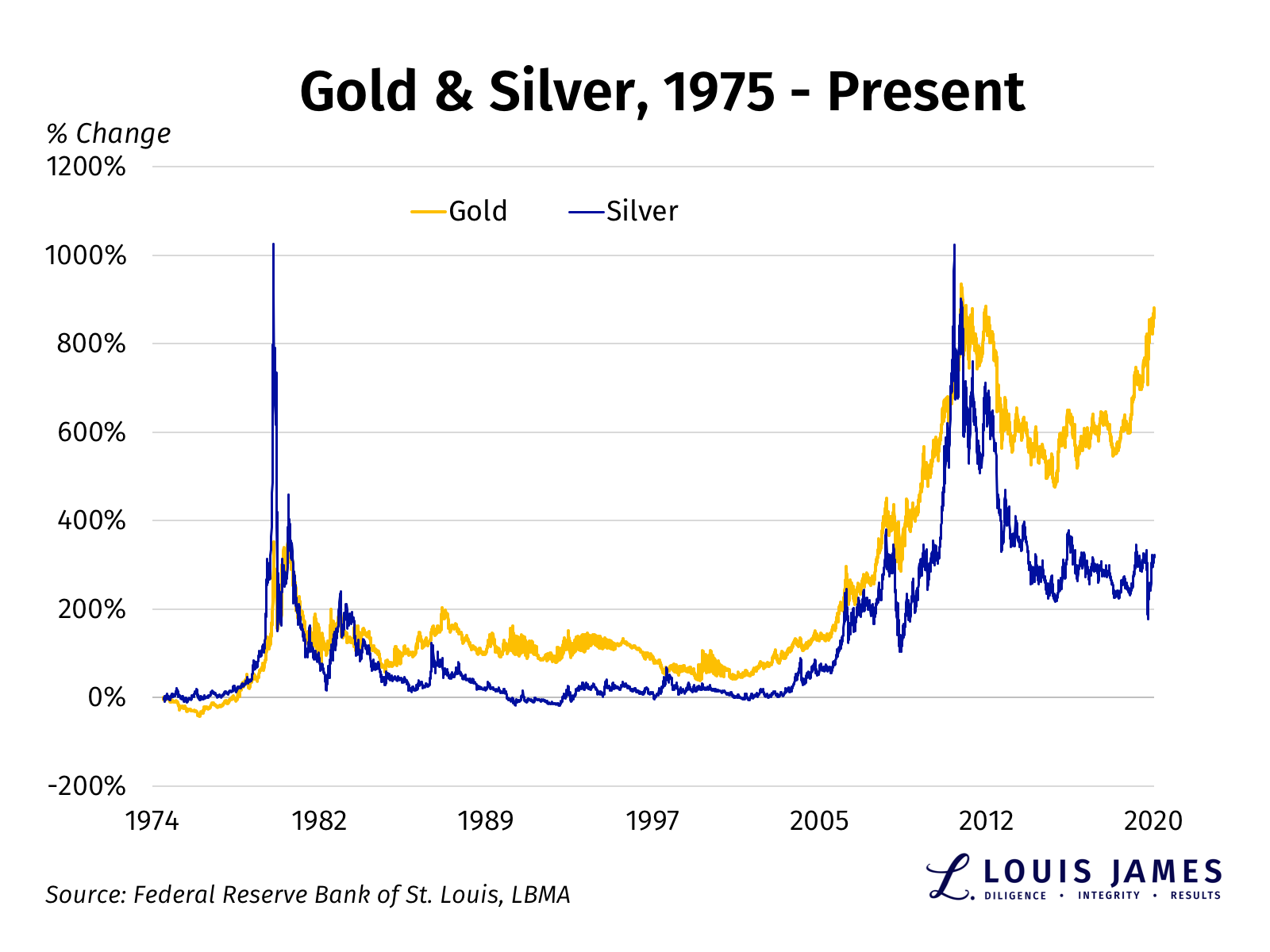 This long-term chart of the change in gold and silver prices shows the dramatic divergence between the world’s two main monetary metals that began after their peaks in 2011. But in 2013, when gold fell off a cliff, silver fell off the world. It ground much lower and has stayed down much longer than gold. Gold bottomed in late 2015. Silver bottomed—so far—last March.

Glancing at this chart, it’d be easy to conclude that gold and silver divorced years ago and no longer travel in the same circles. But a closer look at this same chart says this is not so. Silver and gold drift closer together and farther apart over longer periods of time—but their shorter-term moves are always in the same direction.

This simultaneous movement is strong evidence that gold and silver continue responding to the same powerful forces that have driven them for decades.

Silver just responds a little differently. Or, more accurately, silver also responds to another powerful force—industrial demand—which has been dragging it down in recent years. 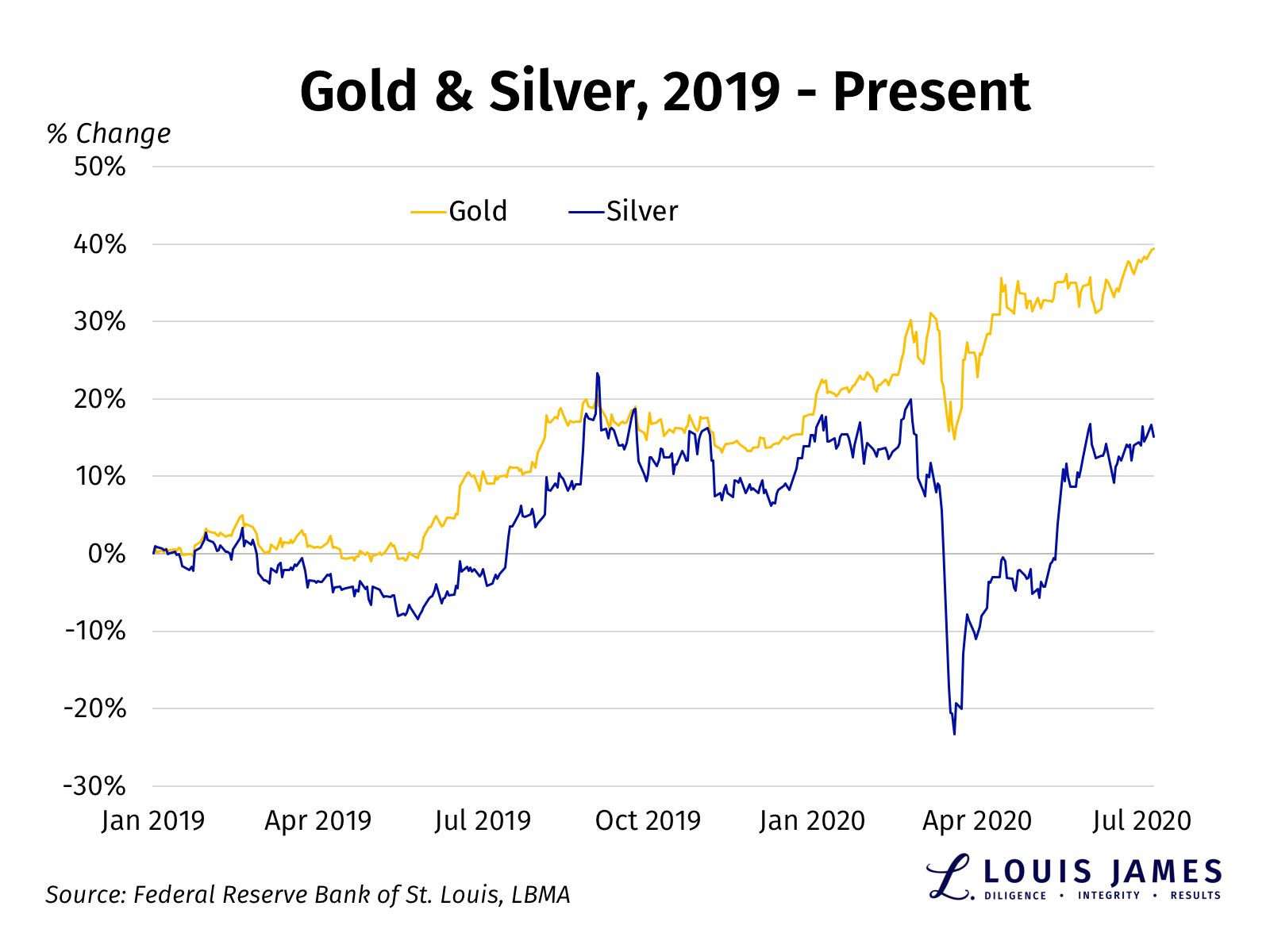 As you can see, gold and silver do still move in the same direction. Silver just does it with more gusto. That’s not news, but it’s important to know that the essential relationship remains intact.

But there are new and telling aspects to this chart:

What do I conclude from these data?

I can’t prove it, but I think that if the COVID-19 shutdowns hadn’t tanked the economy and markets this year, silver would be outperforming gold. Just picture the gains since March without the March dip—silver would be higher.

Because it was oversold. The much-discussed 100-to-one gold-silver ratio was evidence of this. Silver was—and still is—a better bargain than gold.

But there’s something more important than what we see in these charts.

You see, the fading hopes of a “V-shaped” recovery are particularly bullish for silver.

Because most silver is produced as a byproduct of industrial metals mines.

The top source of newly mined silver is the world’s big copper mines. Most so-called silver mines are, by volume, lead or zinc mines (or both). For many, the silver is an important byproduct, but not the most valuable metal to the mine. For others, there’s enough silver to be worth more than the base metals it comes with, but getting paid for those base metals is necessary for delivering to the bottom line. For a very, very few, the silver pays enough that you could mine it profitably even if you didn’t get paid at all for the lead, zinc, copper, or whatever else it comes with.

This is important because our damaged global economy is going to demand much less copper, lead, and zinc than it would have.

This means there is likely to be less silver produced in the next year or two—maybe more—even if the silver price is rising.

And that’s not even considering the COVID-19 shutdowns of many silver mines in Mexico, Peru, and other countries in this quarter. Assuming that all that stops soon, it still leaves a dent in this year’s silver supply… but we don’t actually know yet that it will, in fact, all stop soon.

As many have pointed out, most of the gold ever mined in history still exists in purified, relatively liquid form. Very little gold is consumed. Most of it is stockpiled, either as bars in vaults or as coins or jewelry in our homes.

Not so with silver. Silver has an exploding number of industrial uses, ranging from antibacterial clothing to solar power cells. And all of these things end up in landfills when we’re done with them. Vast quantities of silver are consumed every year, with only a small portion going into bars, coins, or jewelry.

So what happens when gold and silver prices are rising due to money-printing and safe-haven demand and silver supply is reduced due to reduced industrial metals output?

I can’t tell you that one of silver’s periodic mini-manias is on tap over the year ahead—but I do see that card in the deck.

And I can tell you I don’t want to miss it.

How do we position ourselves to profit?

One size doesn’t fit all, of course, but here’s some general guidance:

Personally, I’m in a stage of my life when I’m trying to maximize gains, so I’ve bought shares in what I think are the best silver explorers on the planet—and I’m shopping for more. But I’m not 19 anymore (and not 90). I have many dependents and many other responsibilities. So I’m looking for the least amount of risk for the most amount of upside that my knowledge and experience in the field make possible.

Like what? That’s what subscribers to The Independent Speculator pay to know. No arm-twisting on that, but you’re welcome to join us.

What happens if I’m wrong about silver outperforming gold over the next year or two?

Well, I expect higher silver prices anyway, even if there is no silver mania in the months ahead.

You’re free to make your own call, but this is what I’m doing with my own money.