Who’s Winning the Race to Debase?

A critical issue all investors must consider is how much money governments are printing in the world’s major economies, and what the results of this are likely to be.

Let’s stipulate that creating money has important economic consequences. Anyone who doesn’t agree with the idea that debasing currencies matters is welcome to stop reading now.

For the rest of us, let’s start by looking at the data. Note that I’d have preferred to track M0, the narrowest money supply statistic, as I’d like to get as close as possible to the actual money creation going on. Unfortunately, the Fed no longer makes M0 readily available. I wanted to compare it with broader views of money supply to capture the reported decrease in the velocity of money, but M3 is gone as well, and current M2 is not available for all the currencies I want to look at. So I’m just looking at M1 for now (and even here, we have some lagging data).

Here’s how M1 has grown so far this millennium for some of the most important currencies in global finance. 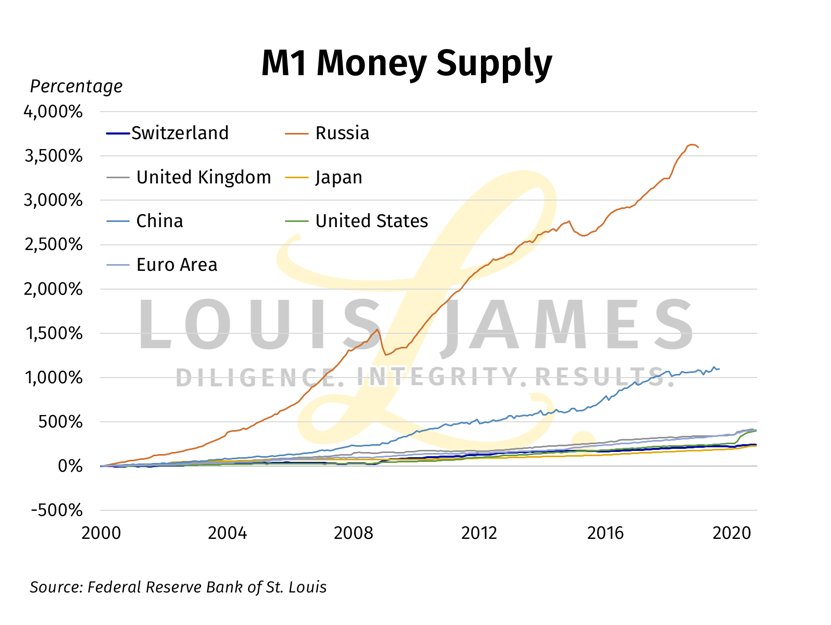 It’s no surprise to see Russia winning the race to debase, given the sanctions it faces and its international pariah status. If we take Russia out of the picture so we can zoom in on the rest, the standout becomes China. 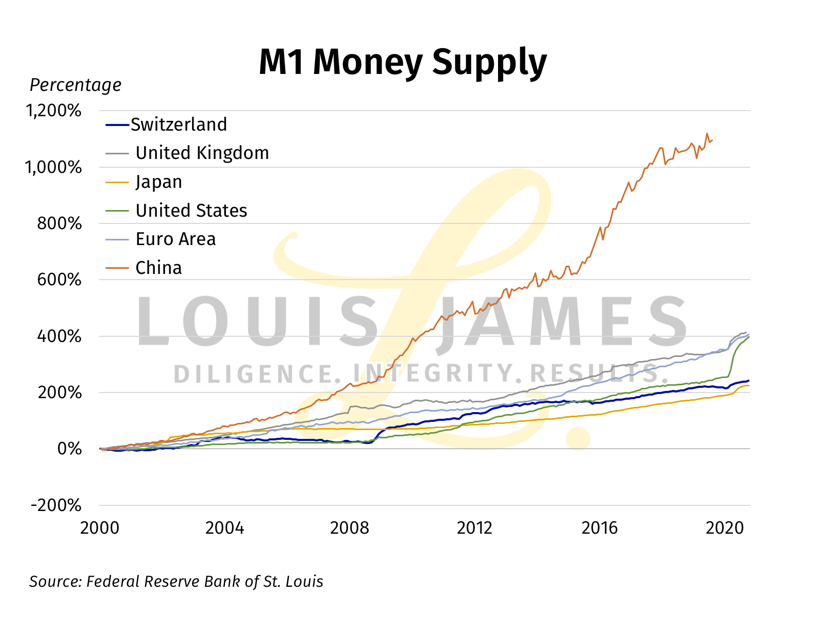 I find this particularly striking. It says a lot about how China has paid for sustaining very high levels of GDP growth while the rest of the world has been struggling. China’s population has grown more than the other nations’ over this time period, so the increase in money supply is diluted per capita, but it’s still impressive to see how it’s grown. This also makes me question the Chinese yuan’s strength as a challenger to the US dollar for reserve currency status.

Now, let’s take China off the chart to zoom in on the other major currencies… 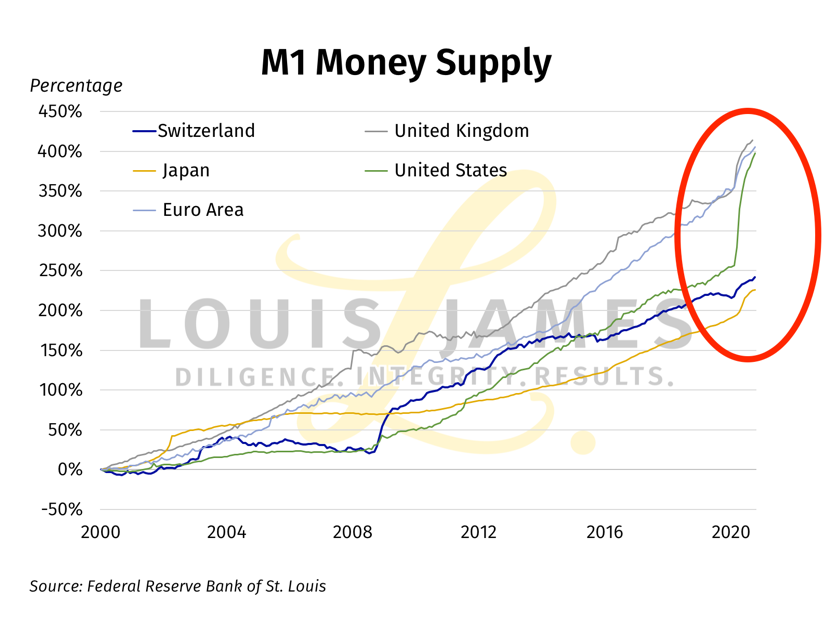 It’s interesting to note that, after an early jump ahead by Japan, it’s the UK that’s been leading the race to debase among these major currencies, followed by the euro. Personally, I find it sad to see how the once-conservatively managed Swiss franc leapt into the race with the rest after the Crash of 2008.

The most striking thing to me is the way USD money supply leapt in 2020 to catch up (or down) with supply of the UER and GBP.

This goes a long way to explaining why the US dollar index (DXY) sank to three-year lows in 2020.

And that’s despite the fact that—as we can see in the red circle on the chart—governments around the world opened the easy-money floodgates last year.

Since commodities are still priced in USD—and since gold competes directly with the USD as a world reserve currency—this has clear and important investment implications.

This being the case, as a speculator, I have to ask myself one thing: Will the USD keep “winning” the race to debase?

I’m sorry to say that—based on the “blue wave” taking control in Washington—I think the answer is yes.

Another key question to ponder is: What happens when the slowed velocity of money that has reduced the impact of monetary inflation on consumer price inflation starts picking up again?

When this changes—on the back of an already greatly-expanded money supply—I expect consumer price inflation to jump... and stay higher despite central bankers' efforts to control it.

This could happen sooner than most economists seem to think, post COVID-19—especially if governments keep sending people free money.

You and I may not have the power to change what’s happening in the world… but we can speculate accordingly.