What’s Up with Uranium Stocks?

Uranium prices have had a great 2018, rising most notably over the last six months. Uranium stocks… well, not so much. 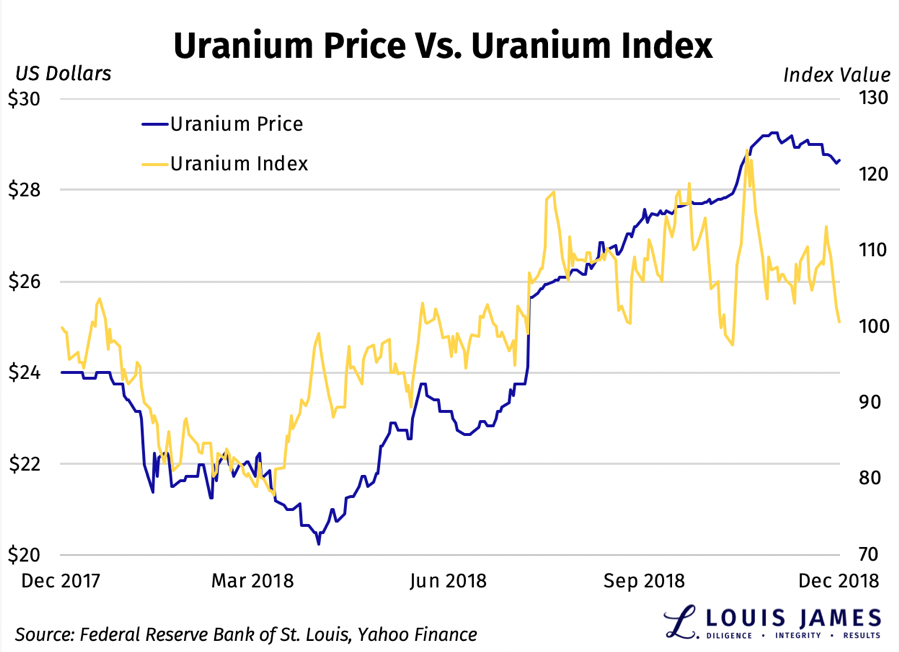 The biggest uranium ETF, Global X Uranium (URA), has several large nuclear-industry companies in it that aren’t uranium stocks, so I’ve built my own index of uranium producers and notable juniors. As you can see in the chart above, my (equally weighted) index and uranium prices have moved roughly together this year, but they’ve come unglued over the last three months.

My take from watching the market closely every day is that uranium stocks have sold off sharply on days stocks in general have retreated sharply—as they did today.

From a value perspective, this makes no sense whatsoever. The fact that Facebook is being sued or that the Fed raised interest rates is irrelevant to the value of a uranium company. That’s especially so for companies with Proven and Probable pounds in the ground that are now worth almost 50% more than they were last April.

But, as they say, the market can remain irrational longer than investors can remain solvent. Complaining about the disconnect does no good. What we have to decide now is what to do.

The bad news is that Wall Street is visibly in trouble. It looks poised to fall much lower. If it does, uranium stocks could continue to get whacked for months to come, even if uranium prices continue rising.

The good news is that that cannot and will not last forever. Mr. Market might ignore increasing value in uranium companies while uranium prices are fluctuating or even inching higher, but he will sit up and take notice when uranium breaks out to new multiyear highs. I think prices heading north of $30/lb. should slow or stop the selling. Prices hitting $40/lb. and rising would make a lot of headlines—perhaps at just the time when many investors will be desperate for anything that isn’t tanking. This could easily happen in 2019. When it does, recent history tells us that quality uranium stocks such as the ones I invest in should quickly double, and then go on to higher multiples.

But will uranium keep rising?

I can’t guarantee that. What I can say is that higher interest rates and even a slowing global economy make no difference to the supply crunch shaping up in the uranium market.

About the only thing I can see that would be disastrous for uranium prices would be another nuclear accident prompting the Japanese to stop restarting their reactors, or the Chinese to stop building theirs. Absent such a catastrophe, I think higher uranium prices are as close to certain as it gets in forecasting commodities trends.

The odds look good to me.

Frankly, I would not buy even the best uranium stocks today, if I couldn’t handle the idea that they might get cheaper in the weeks ahead. As long as uranium stocks respond more to general markets than to uranium prices, that’s a risk.

Personally, I can handle the heat—and I don’t know when uranium will break out to the upside again—so I’m hoping to buy during this month’s Tax Loss Season selling.

The “buy low” part of “buy low, sell high,” is never easy, but that’s how fortunes are made.

That said, you know what I always say…