What Is the Gold-Oil Ratio Telling Us?

A common metric many gold investors monitor is the gold-oil ratio. Why compare two commodities? Because they both can be seen as economic indicators, and divergences between them can be telling. But is this really useful in terms of offering us insight into whether prices of one or the other are likely to rise or fall?

Let’s have a look… 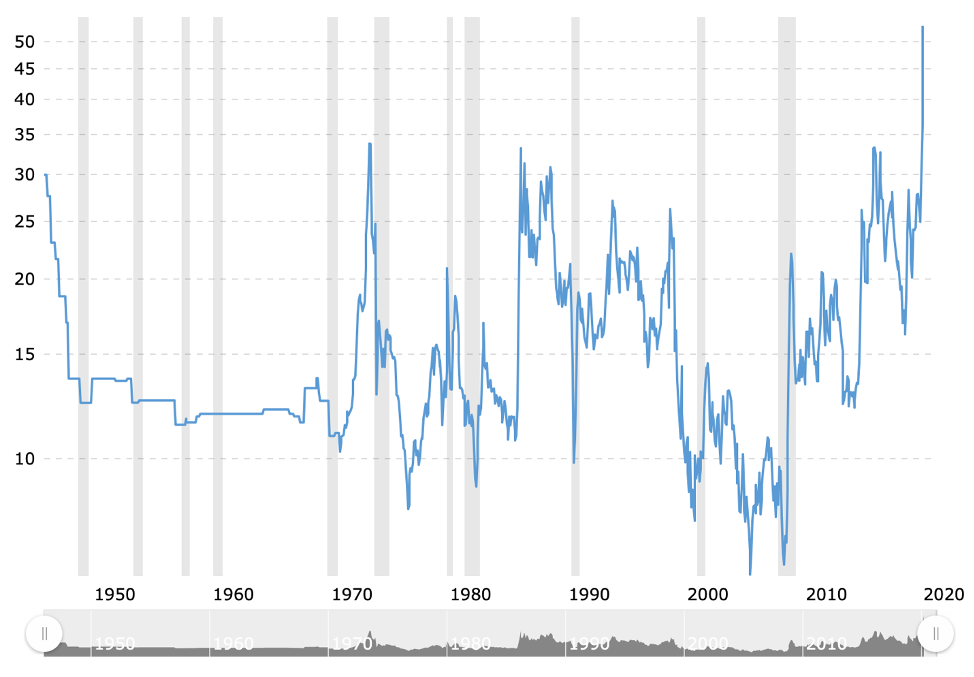 Note that the line is less volatile before 1971, because that’s when Richard Nixon took the US dollar off the gold standard. The grey bars indicate recessions.

Today, the gold-oil ratio is at a record high.

What does this tell us?

Because sometimes gold trades like an industrial commodity, and sometimes it trades like a safe-haven asset. When it trades like a commodity, it’s likely to move in the same direction as oil. When there’s real financial fear in the air, gold changes from Clark Kent to Superman and goes soaring. Logically, oil would see falling demand and hence lower prices at such times. The crash of 2008 is a perfect example.

Oil itself is also subject to factors not related to the general economic climate that impacts both oil and gold. The US shale oil boom is clearly responsible for the increase in the gold-oil ratio over the last decade—even during gold’s bear market from 2011–2015. This same factor and gold spiking in 2019 drove the ratio even higher last year. The recent collapse of oil prices after OPEC and Russia dropped their production cuts is responsible for the new highs this year.

Now, it’s clear to me that the global economy is going into a recession this year. If I’m right about this, it will seem that the gold-oil ratio spiking has predicted another recession.

But that was happening before it became apparent to most investors that COVID-19 is causing a great deal of economic harm. It’s not reasonable to imagine that the price ratio between two commodities can predict a viral outbreak. We can, however, imagine a 2020 with no COVID-19 outbreak. The gold-oil ratio would still be sky-high, based on where gold prices were before the outbreak and what US shale production was doing to the oil market. This would hold true even without the fight between OPEC and Russia.

So, where does this leave us?

The gold-oil ratio is not a useful recession predictor. It’s also not a useful predictor of either gold or oil prices, as the ratio can retreat if whichever is lower rises or whichever is higher falls. The ratio doesn’t tell us which is more likely to happen.

And pulling back to the bigger picture, oil prices will drop to permanently lower levels once the global shift to electric vehicles is complete. That will take years. Perhaps decades.

But the writing is on the wall, and it says the historical gold-oil ratio is a thing of the past.