Last June I wrote, “What’s Wrong with Uranium? Nothing.” My take is much the same today—except that the market looks better to me as a speculator.

Before I tell you why, let’s first have a fresh look at uranium price action over the last five years, which makes my case for nothing being wrong. 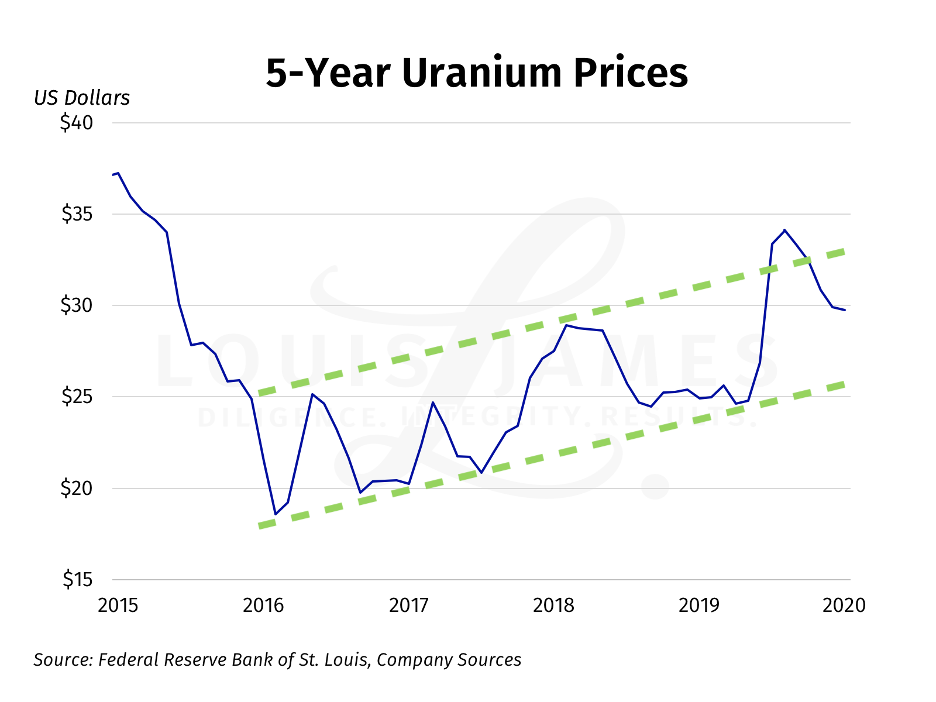 As you can see, uranium’s highly volatile price remains squarely in the middle of its upward trend. The series of higher lows remains unbroken.

Uranium prices would have to plummet almost 20% to break their upward trend decisively.

That’s very unlikely in a year when reaction to a global pandemic caused (and is still causing) major mine shutdowns. This has already created a shortfall in supply, in addition to the voluntary reduction in output the world’s biggest uranium miners had already embraced.

Canada’s big uranium producer, Cameco, has announced restarting its flagship Cigar Lake mine, but even if it returns to full production immediately, it was still offline for half the year. The world’s top producer, Kazatomprom, hasn’t announced any ramping back up again. It has announced that it may have to buy uranium in the spot market to meet its contractual obligations.

But does this matter if nuclear power plants are being shut down around the world?

Yes—because more are being built.

There are 54 new reactors reported to be under construction worldwide this year. The World Nuclear Association (WNA) reports that from 1998 to 2018, 89 reactors were retired and 98 were put into operation.

The WNA projects that over the next 20 years, 154 reactors will be shut down—while its conservative estimate for new ones brought online is 289.

At the same time, Russia, France, and other countries—even the USA—are extending the operating life of many nuclear power plants, and even cancelling the retirement of reactors. The Nuclear Energy Institute says 15 planned reactor retirements in the US have been cancelled during the Trump administration so far.

Another plus is that the US has lifted its prohibition against financing nuclear-energy projects overseas. Russia and China have been doing this for years, securing long-term clients for their technology and, in Russia’s case, mine supply. This shift in US policy should be a shot in the arm for nuclear energy globally.

Better still is that even the Biden campaign has come out in favor of advanced nuclear power to combat climate change. That’s a powerful sign of a major shift in public opinion. Other unlikely sources keep jumping on this bandwagon.

My thinking on this global warming factor is evolving from a mere hope to an actual expectation of more pro-nuclear policy and action worldwide going forward.

Meanwhile, the available data still support my view that the secondary supply that has depressed uranium prices since the Fukushima tsunami has dried up. The overall upward trend in the chart above supports this view. So do reports from producers like Cameco, which have tried to buy cheap uranium on the spot market (to sell into their higher-priced, long-term contracts) and haven’t been able to find enough—not even in Japan.

I can’t tell you exactly when it will happen, but I’m convinced that in the not-too-distant future, power utilities will have to reach out to miners to secure long-term supplies. When that happens, I expect dramatic increases in uranium prices.

Whether the next major breakout in uranium prices happens this month, this quarter, or next year, I want to have solid positions in great uranium stocks before it happens.

This is the key point of this update: despite the fact that uranium prices are up about 20% this year, shares in many great uranium companies are down.

Investors have grown tired of waiting for payday in the uranium space. I hear this even from my own readers. It seems like the fundamentals have been bullish for years and years and yet, nothing happens.

Well, I think the chart above shows that something is happening.

I remain convinced that—absent another major nuclear accident—low prices will cure low prices in this space.

And I don’t want to scramble to buy after prices start making vertical leaps. I’m happy to buy shares in great companies from those who’ve given up.

This is how we make impatience our friend.

But what if the economic downturn sends energy prices lower?

A downturn in energy prices in general could indeed put uranium prices—and uranium stocks—under pressure. But we don’t use uranium to power cruise ships, commercial airliners, or as reserves for periods of high demand. We use it for base-load power. That needs to stay online no matter what. Uranium prices have not tracked oil over the last year, and I don’t expect them to start doing so now. If spot uranium does drop as a knee-jerk reaction to lower oil prices, I would not expect it to last.

Yes. But only temporarily—especially if uranium prices take off as I expect them to.

Increasing demand is a solid global trend. Despite this, a major market meltdown would hit all stocks, including uranium stocks. But as I’ve written recently, that crash is not certain and I think it would be a mistake to sell too early. On the other paw, it would create terrific buying opportunities for disciplined contrarian speculators.