Uranium: An Idea Whose Time Has Come Again?

I remember when former Greenpeace president Patrick Moore rocked the world by turning pro-nuclear energy in the mid-2000s. I was working for Casey Research at the time. Doug Casey was convinced uranium would go higher. Moore’s courageous decision to prioritize facts over fears was a boost to the narrative of the day. Doug was right, and uranium prices soared from lows under $10 per pound up to almost $140.

But Moore seemed very much to be a lone voice calling out in the wilderness. I can only imagine the hateful backlash he must have subjected himself to from his former colleagues and the worldwide, fear-driven movement they’ve spawned. Frankly, I never expected his integrity to be emulated.

That’s why I was so fascinated when I recently stumbled on Michael Shellenberger’s talks in favor of nuclear power. This guy isn’t some corporate industry shill. He’s a hardcore environmentalist. He also happens to think that the truth matters.

Shellenberger’s talk on how he changed his mind about nuclear power is strong stuff.

His talk on how fear of nuclear power was engineered—and how it may end—is truly moving. 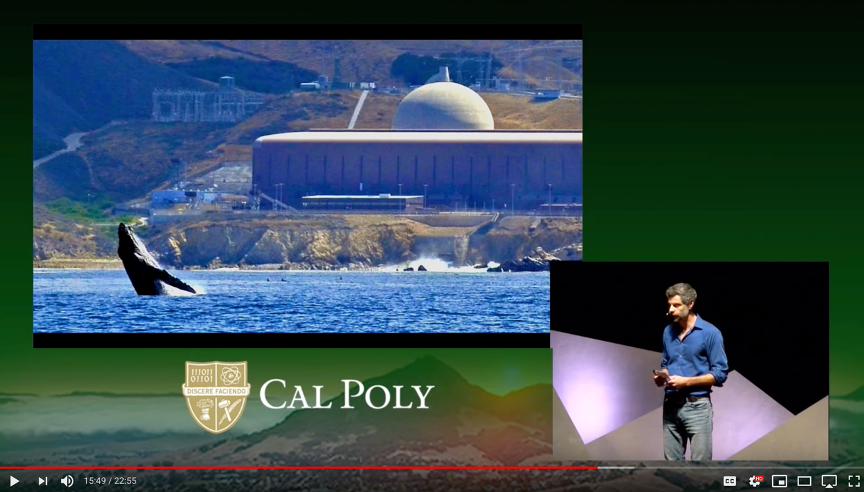 In his TEDx talk on nuclear power, Michael Shellenberger shows a photo of a whale he saw breaching in front of the Diablo Canyon nuclear power plant in California.

But the important good news is that Shellenberger is not alone. If you simply type “nuclear power” into the search tool on YouTube, you get a screen full of links to videos that are neutral or positive. More and more people are at least willing to consider the question, rather than close their minds to any possibility that past fearmongering might be wrong.

That’s great, but what really caught my attention was when NPR reported on the 40thanniversary of the Three Mile Island accident—and suggested in that article that the world might need nuclear power after all. Quite striking, given the source.

The cherry on top was to see an op-ed in the New York Times, that bastion of liberal media bias, arguing that climate change requires the world to embrace nuclear power.

Does this prove that the nuclear renaissance Patrick Moore seemed to be spearheading before Fukushima is back on track?

I can’t honestly say that I know the answer is yes. I know that people have been burned by fizzled uranium rallies before.

But remember that the moment a tide shifts is imperceptible. You can’t see when the water stops rising and starts falling. This is only clear after the movement gains strength. And then the momentum is unstoppable.

If the climate-change movement turns pro-nuclear, that renaissance will be a done deal. It will be an idea whose time has come—again.

The impact on uranium prices would break all records.

And investors in the right uranium stocks will make fortunes.

Which uranium stocks? You’re welcome to subscribe to The Independent Speculator, to find out which stocks I’m putting my own money into.

Or go it on your own. But whatever you do, please don’t let fear of past disappointments in this space keep you from profiting from what may soon become the next unstoppable resource investment trend.