Fiscal conservatives point to the growing body of evidence that very bad things happen when government debt exceeds its GDP by more than 125%—as is the case in the US today. Apologists for government profligacy counter that US debt to GDP exceeded by almost as much by the end of World War II, and the US “grew” its way out of it. Trump himself said the COVID-19 situation was like WWII, so why shouldn’t the US take on just as much debt to defeat its enemy?

Before I answer, let’s have a look at a long-term chart for some context. 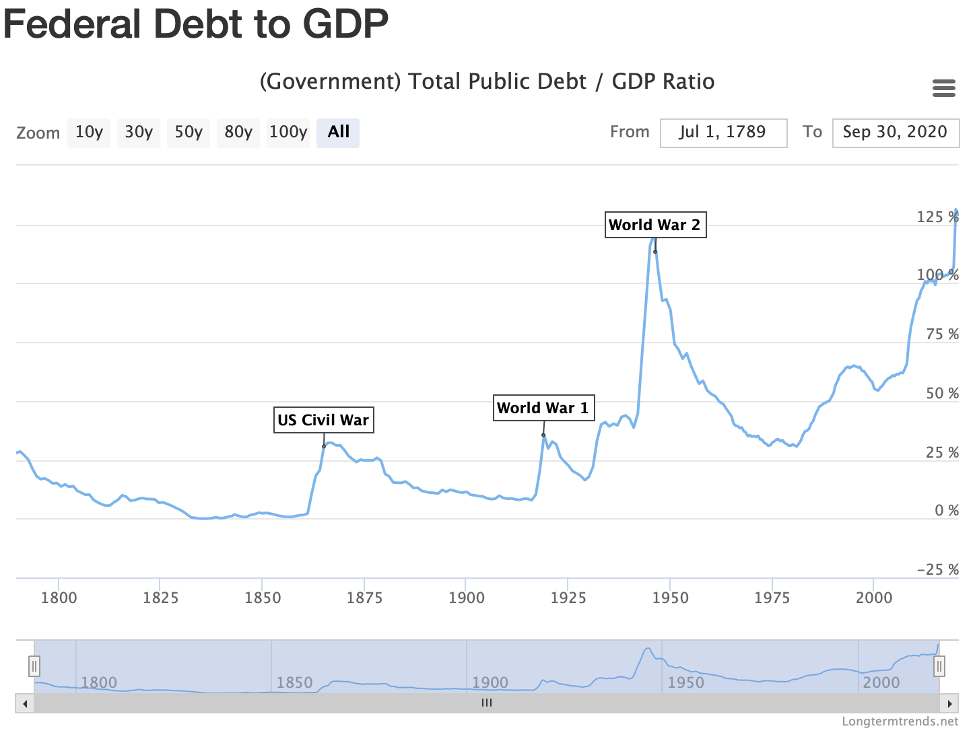 Several things on this chart stand out to me:

In short, the situation today is much worse than what the US experienced after WWII—and it’s still getting worse.

I wish someone would ask Powell, Lagarde, and Yellen why anyone should pay taxes at all if money supply no longer matters.

I’m not going to hold my breath on that.

My point today is simple: this mountain of debt has clear and, in my opinion, inescapable consequences.

The primary result is that the value of the US dollar is going to be eviscerated.

This may be masked by other governments doing the same to their currencies in the “race to the bottom.” Don’t be fooled. We’ll see the loss of value in all these fiat currency units when we go to the food store, or seek to exchange them for anything real.

This includes commodities in general, of course—but gold and silver in spades.

Well, I said anything real… by this I meant physical. Like real estate. Commodities. And physical wealth I can hold in my hand, like an ounce of gold or silver.

How real cryptocurrencies are is still very much subject to debate.

And it remains to be seen how much their prices will hold up if or when they become real enough in use to pose a serious threat to the fiat currencies of major world powers.

If the market writ large decides to accept Bitcoin or any other crypto as real money in the future, I won’t boycott it. But until then, gambling on their exchange rates with fiat currencies is too risky for me.

Maybe I’m just an old curmudgeon, but I like value I can touch. Hold in my hand. Own without counterparty risk. Save without worrying about it becoming frozen in some great systemic crisis.

Call me a gold bug; I’m fine with that.

But whatever you do, don’t forget about the mountain of debt the world is taking on, encouraged by central bankers who say that money supply doesn’t matter.