TINA Is FOMO in Disguise

The latest buzzword going around among investors is TINA: “there is no alternative.” The idea is that with bonds paying negative real yields, the old 60/40 formula is dead, leaving investors with no alternative to going all in on stocks. 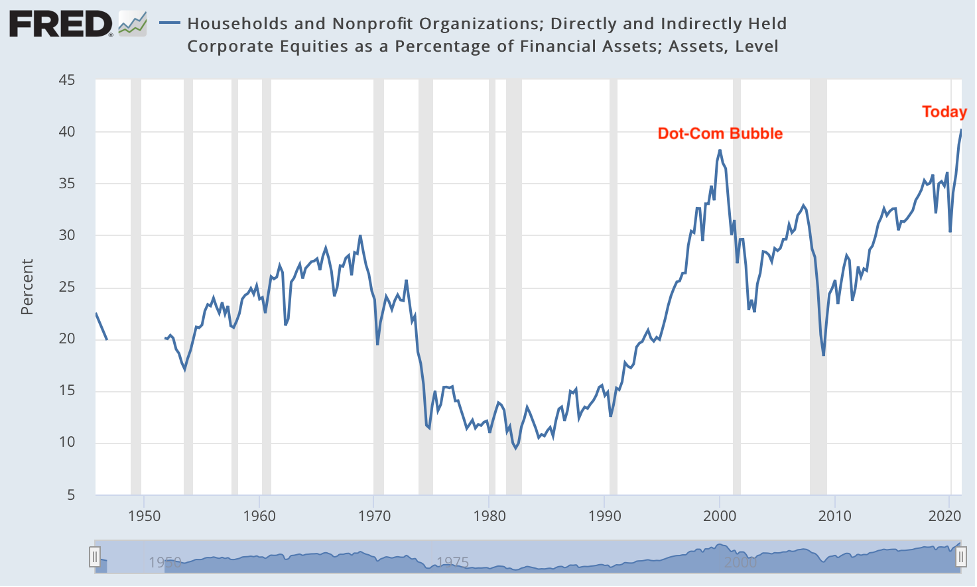 My first thought on seeing this chart is that we all know what a catastrophe for investors the last record high turned out to be.

My second thought is to note that the magnitude of the surge from trough to peak last time is much greater than the current run-up. This suggests that today’s bubble on Wall Street could get much larger before it pops. And that’s consistent with what many money managers are saying about there still being plenty of money on the sidelines.

But just because stocks might go higher doesn’t mean they will.

And, in point of fact, it simply isn’t true that there’s no alternative.

Like them or not, commodities are a logical alternative with a long history of providing contra-cyclical balance to equities.

This is clearly shown in charts of commodities versus stocks, such as this one, courtesy of our friends at incrementum and their annual In Gold We Trust report. Such charts not only show commodities to be an alternative, but a desirable alternative in case stocks go into a major cyclical downturn. 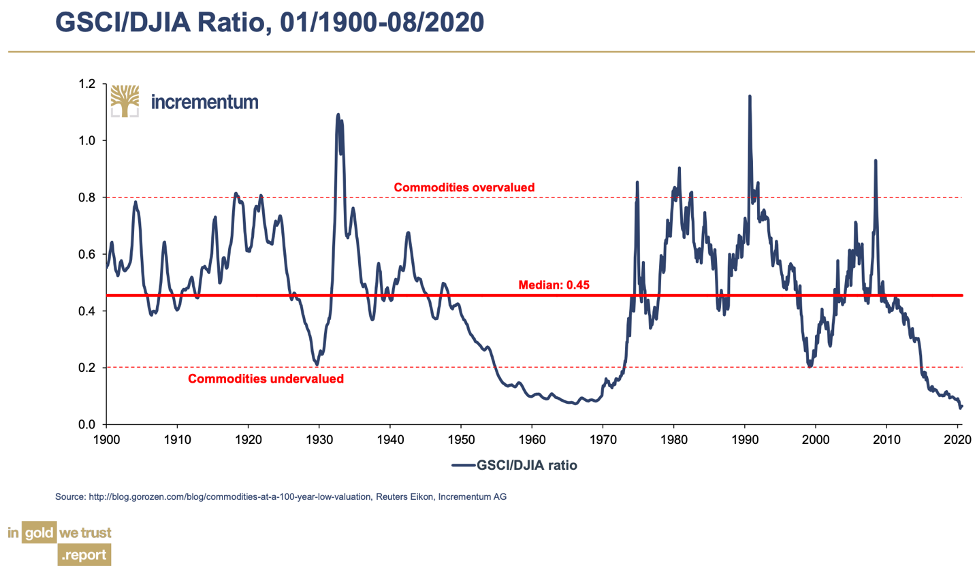 The other takeaway, of course, is that compared to stocks, commodities remain very cheap.

When there’s a whole asset class with clear and important value that’s selling cheaply, it makes no sense for investors to shrug and say there’s no alternative to chasing overpriced market darlings on Wall Street.

This goes double with major governments around the world printing money like there’s no tomorrow, which is extremely bullish for commodities.

In addition, we have monetary metals as a key subset of commodities. The old complaint about gold not paying interest is simply wrongheaded in an environment of negative real rates. Bonds guarantee their owners' losses.

Gold and silver offer their owners a decent shot at capital appreciation—or if not, at least retention of value over the long term.

TINA is just FOMO in disguise.

Now consider the psychology of rebranding FOMO as TINA…

It tells us that investors know they’re chasing overbought stocks and doing it anyway.

This is a form of market capitulation, but to the upside instead of the downside.

As long as TINA keeps whispering seductively in investors’ ears, the melt-up can continue. The longer it does, the more money it pulls off the sidelines—or straight off the government’s virtual printing presses.

And the longer this goes on, the more people will get crushed when the bubble bursts.

When does this happen?

I wish I could tell you.

There are pundits who pretend to know, but I don’t believe any of them. Not the perma-bears who say the sky is falling tomorrow. Not the perma-bulls saying it will never fall. Not the clever analysts who make compelling cases for X, Y, or Z date.

The easy money still flooding out from Washington could keep the party going on Wall Street for longer than skeptics like me imagine.

Or the party could end tomorrow.

I don’t know—and neither does anyone else.

… especially since there are alternatives.