The Summer of 2019 Could Be the Opportunity of the Decade

I just read an article arguing against the conventional “sell in May and go away” Wall Street wisdom this year. The argument is centered on the non-appearance of the much-feared earnings recession this quarter.

The major indices were widely expected to suffer as a result of lower earnings compared to a year ago, when Trump’s tax credits were boosting markets. But the reality hasn’t been that bad, and the damage priced in in advance could boost markets again this summer as it’s unwound.

Fair enough, but the strength of the historical numbers on the summer slump for stocks is really quite striking. Even during the raging bull of recent years, the six months from May to November have, on average, underperformed the rest of the year. 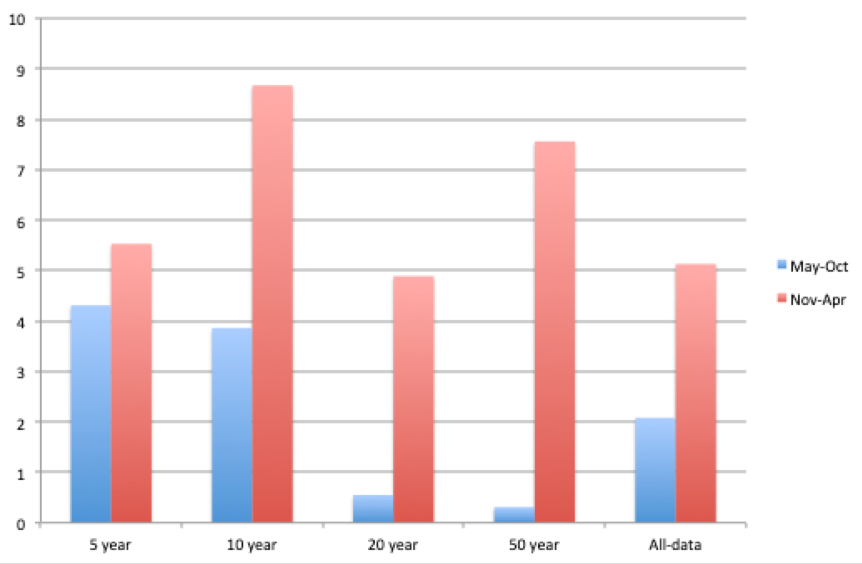 The most striking thing about this chart to me is how greatly the bull market of the last 10 years has bucked the longer-term trend. So, what happens when the bull market ends—if it hasn’t already? My guess is that we’ll see a reversion to the norm.

With the major indices having already delivered much of the gains most analysts were hoping to see for the whole year, I can certainly see the appeal of “sell in May” thinking.

On the other hand, I do think Wall Street will jump if the US and China finally agree to a new trade deal. I do think that will happen and I don’t think it’s entirely priced in. I see evidence for this in the way the markets rise every time there’s positive news—even trivial or vaguely positive news—on the trade negotiations.

This and all the cash reportedly still on the sidelines could produce a near-term, FOMO-fuelled melt-up on Wall Street. That would make selling mainstream equities in May seem premature. On the other hand, almost by definition, a big melt-up would be followed by a severe downturn. If that gets bad enough, it could trigger a 2008-style “waterfall event,” which would make those who sold in May feel like geniuses.

For gold and silver stock speculators, the risks are inverted. A major melt-up on Wall Street would be a rush to risk assets and away from safe-haven assets, as I’ve written about recently. That would imply a major retreat in precious metals prices—gloom turning to capitulation—just before a big correction on Wall Street injects a massive dose of fear into Mr. Market’s aorta.

In other words, a major Wall Street melt-up could create a spectacular precious metals buying opportunity just before the next big rally in gold and silver prices.

Note that this is specifically in the case of a Wall Street melt-up that results in a major downturn afterward. That may not happen. The broader markets could just muddle along as they have since rebounding after last fall’s correction.

If so, precious metals are not as likely to get hammered in the near term. And the lack of a big fear-producing drop after the non-melt-up is then less likely to send gold and silver soaring. Precious metals would have to wait for some other catalyst.

If you want to know how I deploy my own cash in this scenario, please subscribe to The Independent Speculator.

Regardless, I will track the situation and post on it for readers of my free Speculator’s Digest.