The Fed Is Playing with Hyperinflationary Fire

The Fed has now officially moved its price inflation goalpost. The new target is an average of 2%. Chair Powell explicitly says the Fed will let inflation run above 2% to make up for the time spent below 2%. This implies higher commodity prices, including gold and silver.

Given how long the US has seen low (official) inflation, the Fed’s policy of low rates is likely to last a long time—even in the face of much higher inflation—which is extremely bullish for commodities.

There’s a lot I could say about the wisdom of this policy of trying harder to erode the purchasing power of the US dollar faster, but no one in Washington is asking me.

In aggregate, neither Republicans, nor Democrats, nor the experts they rely on are the least bit interested in a more austere policy.

Easy money for the long haul now seems baked in the cake.

But wait a minute. Haven’t Austrian-school economists, gold bugs, and other hard money advocates been saying for years that massive government money-printing would lead to higher consumer price inflation? And has not this higher price inflation, like the Great Pumpkin, failed to appear year after year?

Well, Thanks to ShadowStats.com, we can look at inflation the way the government used to calculate it before persistent high inflation rates in the 1970s prompted the Bureau of Labor Statistics (BLS) to “improve” on its Consumer Price Index (CPI) formula.

Either way, inflation is much higher than what today’s BLS (or just BS) CPI numbers tell us.

I think anyone who’s been feeding a family for years can see that this is true every time they go to the store.

And that’s not even considering the extraordinary inflation we’ve seen in financial asset prices, such as stocks on Wall Street—and monetary metals like gold and silver.

It’s my view that the previously record-breaking monetary inflation unleashed in response to the Crash of 2008 did create price inflation. It’s just that the way the money was doled out concentrated that inflation in financial assets. The economic downturn, plus the BLS’s new CPI formula have maintained the appearance of relatively low inflation in a broader basket of consumer prices.

This brings us to what I see as an especially dangerous tipping point.

The appearance of low inflation in the face of even greater record-breaking fiscal and monetary generosity this year is making it seem that the “let’s spend our way to prosperity” crowd are right.

Call it MMT, or emergency measures to combat the global pandemic, or spineless pandering to voters addicted to free money…

Whatever we call it, it seems to me that there’s a “we got away with it” feeling in Washington that guarantees greater government profligacy than ever going forward.

But even if I’m wrong about that, the problem with printing money to pay bills is that it takes time for the debasement of the currency to become evident.

This is why smart people who should have known better than to play with inflationary matches have sparked hyperinflationary fires.

Of course, they all say they had no choice. And they thought they could control it. But by the time they find out they’ve gone too far, it’s too late to control the inferno.

Not to push my metaphor too far, but perhaps it’s no coincidence that major forest fires have been caused by experts attempting “controlled burns” to reduce the risk of a forest fire.

On top of the usual hazards that have resulted in hyperinflation, there’s the added problem of the USD enjoying the “exorbitant privilege” of being the world’s preferred reserve currency.

As many economists have noted, this has made it possible for the US to borrow in its own currency and to print more money than other countries could ever get away with. In my view, the #1 US export has, for a long time, been inflation.

Even economists who don’t share my views on monetary theory are aware of this—and use it as an argument in favor of their advocacy for more money-printing. Why not keep printing all we want? It’s worked for decades, hasn’t it?

And therein lies the danger…

The US has gotten away with profligacy for decades. And now, in the great pandemic panic of 2020, the US has thrown monetary caution to the wind—and it seems it’s gotten away with it. So now, the temptation to even greater profligacy—especially in an election year—will be irresistible. Republicans and Democrats alike are telling us they have no intention of resisting it. They argue only about how profligate to be.

I fear the US has already passed the point of no return.

By the time the Fed realizes that inflation has risen too far above its new average target, I don’t think they will be able to control it—especially since fiscal policy is out of their hands.

But let’s say I’m wrong and the Fed does manage to control the situation domestically.

What happens if US government profligacy erodes international confidence in the dollar to the point where it’s no longer the preferred reserve currency?

There’s no law of nature that says the world has to keep believing in the value of the dollar, no matter how many of them the government creates out of thin air.

Preferences can and do shift. History is full of examples.

And today, the Russians and Chinese, at least, are actively working to dethrone the USD.

Who can say when the tipping point will be reached? At some point, international smart money is going to start dumping dollars. Given the USD’s slide in recent months, it’s possible this has started already. If so, once that becomes evident to all, the rush to the exits will be one for the record books.

I’m not saying this is already happening… though it might be.

I am saying that every preferred currency in the history of money has fallen from favor when sufficiently debased.

And I see very little opposition to debasement of the USD today.

This leads me to conclude that:

Roughly the same applies to other major currencies as well, of course. But it’s the USD that has the most leverage to the downside if it loses its reserve currency crown.

Put another way, I have a message to all who’ve concluded that the US can print all the money it wants with no inflationary consequences: “Wait and see.”

Even the Fed seems to be saying it won’t be long now.

But if this is so, why did gold and silver drop on the news today?

Actually, both spiked sharply upwards on the news, even as the dollar fell off a cliff. And then the bond market responded, with bonds falling, sending rates higher. That’s when gold, silver, the dollar—and even Bitcoin—reversed course. The Fed may be forced to embrace yield curve control measures soon, if this keeps up. 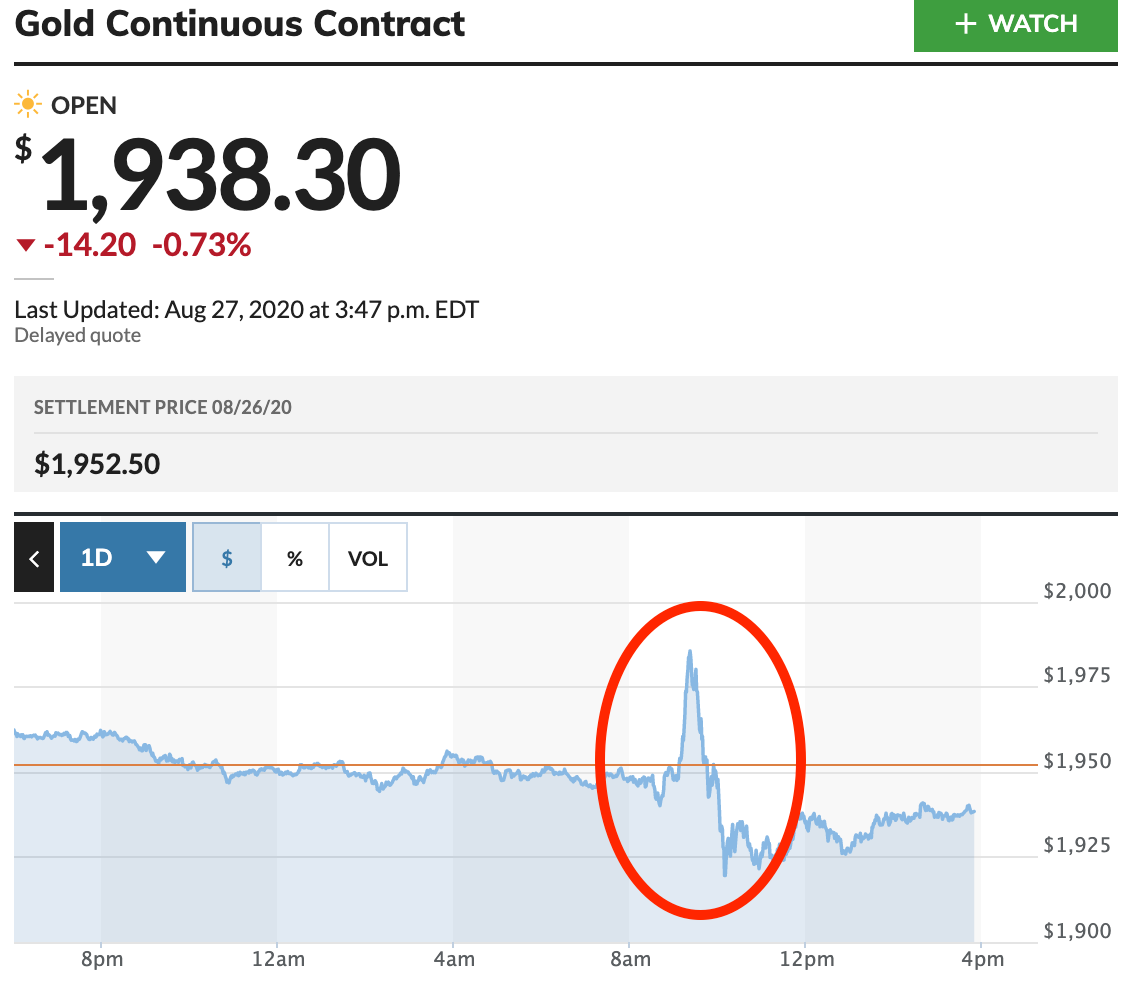 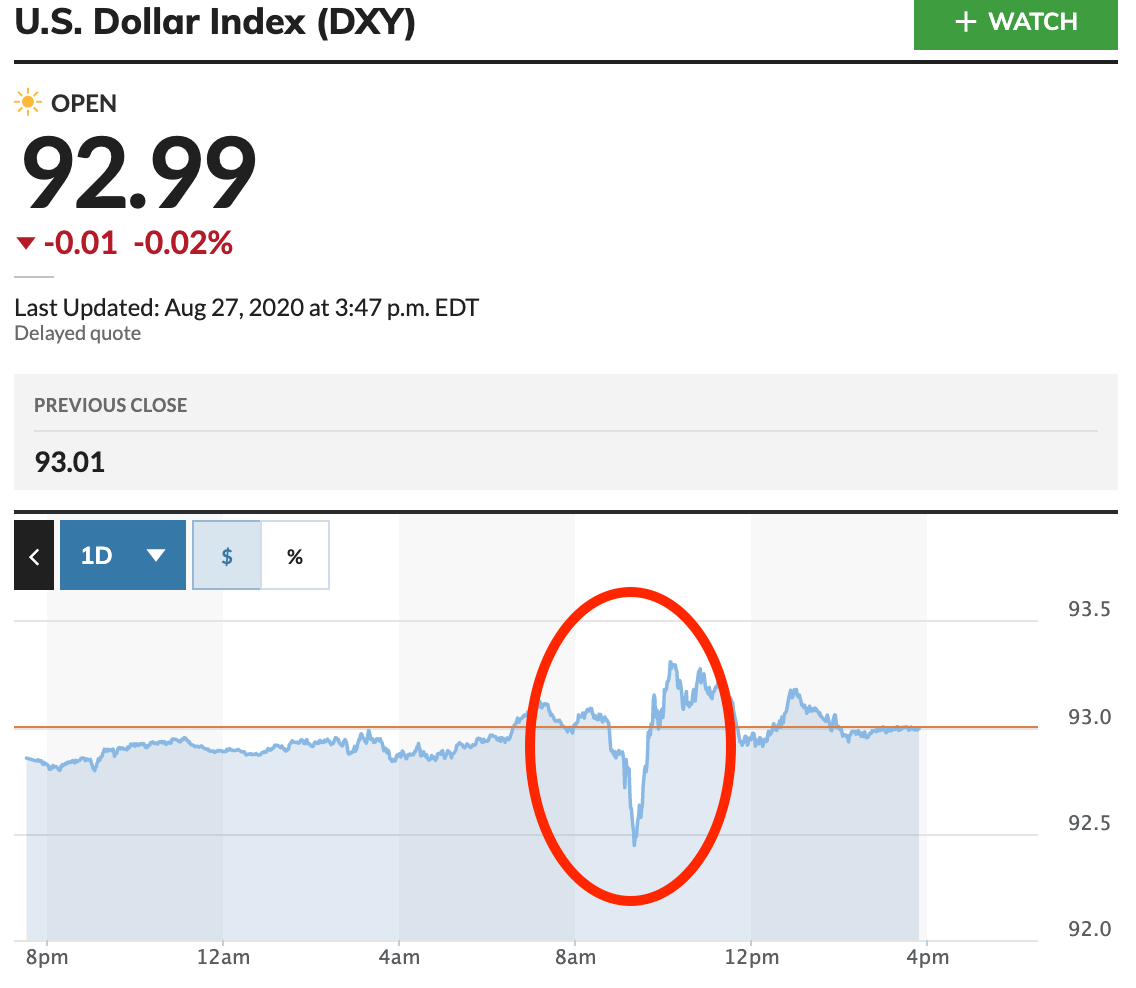 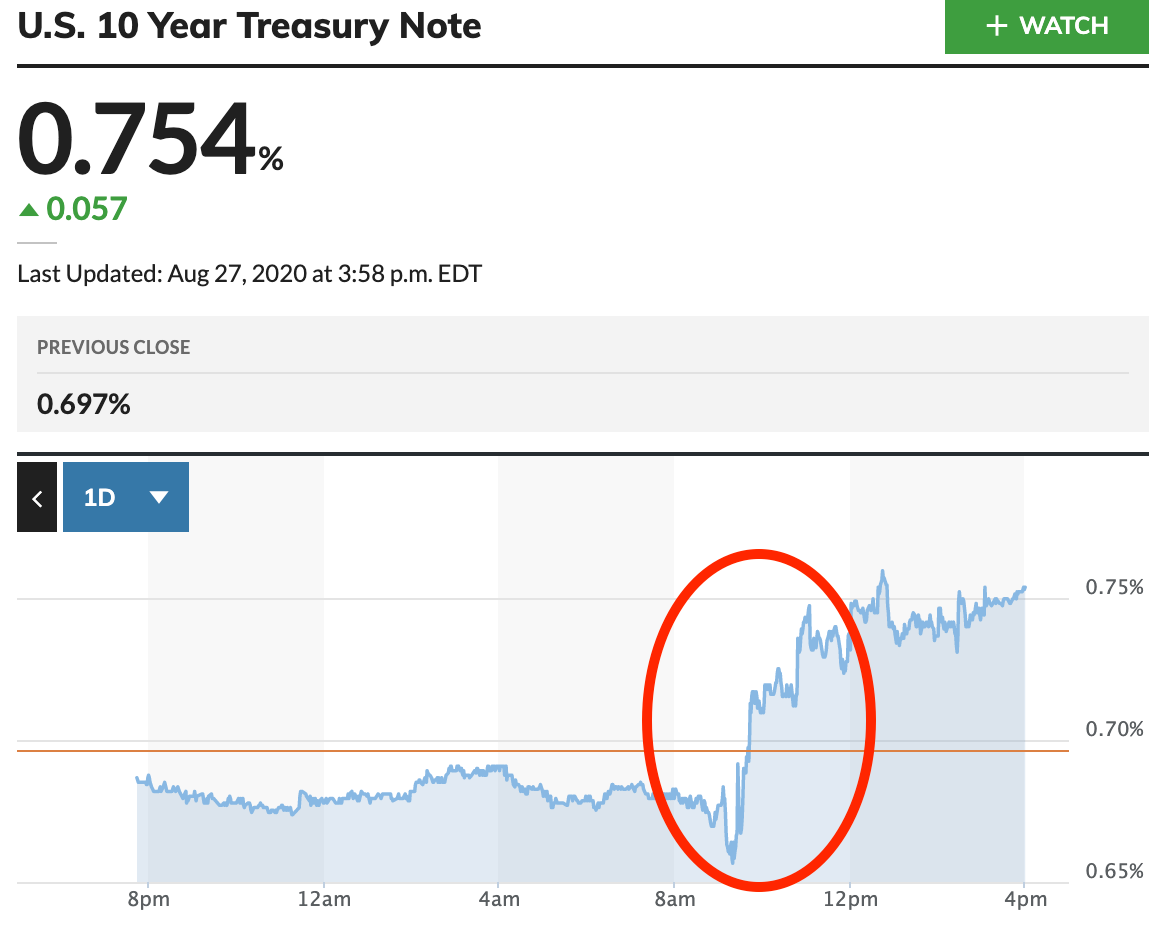 Be that as it may, I see fluctuations like this as temporary, knee-jerk reactions. We’ll see if I’m right about the larger trends I’m calling in the months and years ahead.

Answering that is what I work on every day at IndependentSpeculator.com.

But here are a few quick takeaways: