Speculating on Success In Progress

I tell clients that my two favorite types of mineral exploration plays are the pre-production sweet spot (PPSS) and what I call Success In Progress (SIP). The PPSS is well defined and understood. But what do I mean by Success In Progress? Why should resource speculators care? And when is it time to take a SIP?

Definition: A SIP play is a company that has achieved predictability in exploration results and is producing a steady flow of value-adding news in the midst of a substantial discovery.

Visually, a SIP company is one moving up the steepest part of the “Lassonde Curve” (an idealized stock chart of exploration play that makes a discovery and then goes on to production). 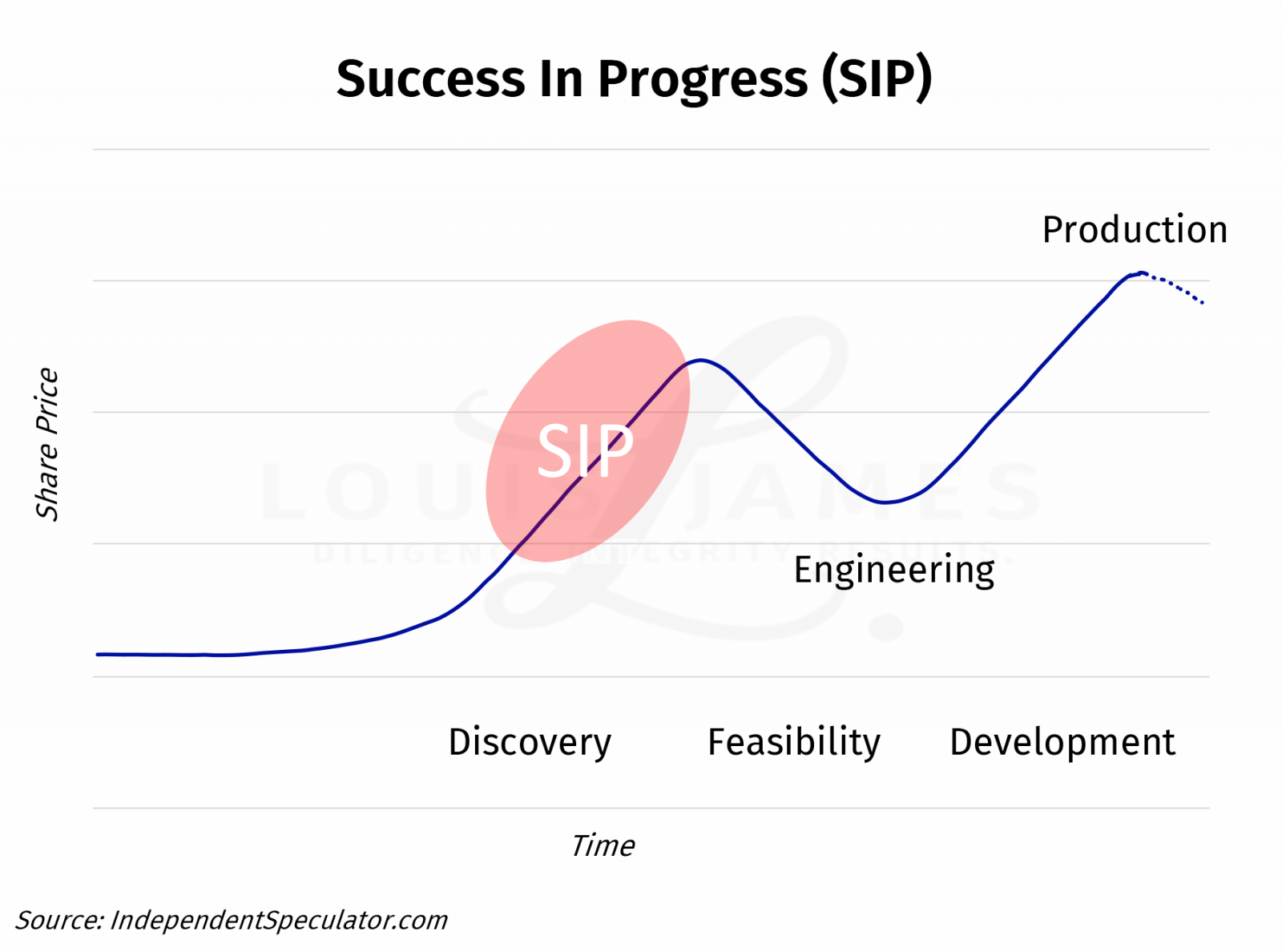 My definition does not give us clearly defined entry and exit points as the PPSS does, but it does tell us what to look for.

Note that the SIP strategy means missing out on the initial vertical leap in share prices of an exploration company when it first announces a significant discovery. But it also means we take much less risk.

What are the odds at any given time of an explorer announcing that first exciting drill hole?

Well, there are some thousands of exploration companies, and only a handful of exciting discovery holes announced per year. I’d say that 1,000 to one, against, are fair odds on buying a stock within a year before such the company makes a big discovery.

But what are the odds of a SIP play delivering in the next batch of drill results?

Pretty good, actually. Remember that it’s not a SIP until the results start coming in predictably. At worst, the odds are better than 50-50. Failure is always possible. There’s no such thing as a sure thing in investing—and much less so in mineral exploration. But the longer a company keeps hitting pay dirt where expected, the better the odds are that it will deliver more value for shareholders.

But doesn’t this make for a crowded investment? Won’t everyone else be piling in?

But there’s still good money to be made.

Imagine a junior explorer that becomes a 20x winner as it drills off a big discovery. Let’s say the stock doubles on the discovery hole. Then it doubles again on a second batch of results that confirms the effectiveness of the company’s drill targeting. At this point, we’re convinced it’s a SIP play. We’ve missed out on 200% gains on the initial discovery—but there’s still plenty of gains left on the stocks way to becoming a 20-bagger.

Why not buy after the initial discovery hole?

Because one datapoint doesn’t make for a deposit. The company could have had the bad luck of drilling into an unusually rich pocket of mineralization that is not representative of the actual endowment on the property. Expectations will be high, and the stock will tank if the next batch of results is not as exciting. There is still a huge amount of risk after the first few pierce points, no matter how exciting they seem.

To me, the prototypical SIP example is the original Virginia Gold. The story came to my attention after the initial discovery of what became the world-class Eleonore gold mine in Quebec. I remember clearly how every time the company put out a press release, it included a batch of thick, high-grade drill results that expanded the discovery. The company’s drill targeting was so effective, they almost never missed: out of 212 drill holes, over 70% hit 10 g/t gold or better. This took the stock from about C$1 when I first started following the story to about C$10 when the company was bought.

Virginia’s results were so consistent, Goldcorp bought it for $420 million in 2005—even before any resource estimate had been calculated.

That’s what a Success In Progress play can do for shareholders.

The key SIP insight here is that the discovery hole is not an end, but a beginning.

The big surge in share prices on a “discovery” is not based on one hole, but a lot of successful drilling after that hole. That famous first surge on the Lassonde curve, based on discovery, takes place over months—sometimes years—not days.

Because there’s no clear-cut start or end to the SIP phase of exploration, I can’t give you figures for the average gain in a SIP play. I can tell you from experiences I’ve had with them, like Virginia, that they can deliver high multiples on our investments.

They can also go off the rails, so due diligence is still required.

This makes researching the best SIP plays on the market a top priority for The Independent Speculator.

You’re welcome to join us (and may wish to try us out before the monthly subscription option is discontinued on October 1, 2020), but the idea is yours free of charge.