I’ve been watching for silver prices to retreat more as the silver short squeeze meme is dropped by news media. This hasn’t happened. That could be because the fundamentals remain as bullish as I’ve ever seen… or because the cat is out of the bag on the opportunities in the silver space.

The news cycle has moved on from the silver short squeeze for now, but new coverage includes the rising commodities tide. Oil is up. Agricultural commodities are up. Dr. Copper is hitting eight-year highs. Even J.P. Morgan has come out as a commodities bull.

Dealers are cleaned out. Their suppliers are back-ordered. I just recorded an insightful conversation with a group of bullion dealers and other silver experts.

I found it striking that it’s not just silver coins, but even 1,000-ounce bars are getting hard to come by—and the record demand for physical metal has spread to gold as well.

That’s great for all of us coin “stackers” who already own silver. But why aren’t silver prices rising higher if people are paying 30% – 40% premiums above spot prices for the metal itself?

The experience of retail silver buyers is often at odds with spot silver prices quoted by the industry because spot is set by trading of futures contracts. Those are theoretically for future delivery of 5,000-ounce bars. In practice, most traders have no intention of taking delivery. They simply roll old contracts into new ones, or settle in cash.

That’s under “normal” conditions. When physical demand surges globally, it does “truckle up” to futures traders. That can be both due to traders seeing what’s happening and acting accordingly. It can also be because parties that actually want to buy and own silver start taking delivery of the physical silver that backs futures contracts. There are numerous reports of the latter now happening in record amounts.

This is all very bullish for silver—and gold—but I don’t speculate or trade on either. I buy and hold bullion as long-term savings. It’s physical wealth that can’t be inflated away by any government.

For that, I want to speculate on the high leverage that shares in the best mineral exploration, development, and production companies typically offer over the metals themselves.

And there is very good news on this front.

Consider this long-term chart of silver and the major silver stock ETFs (going back as far as we have data). 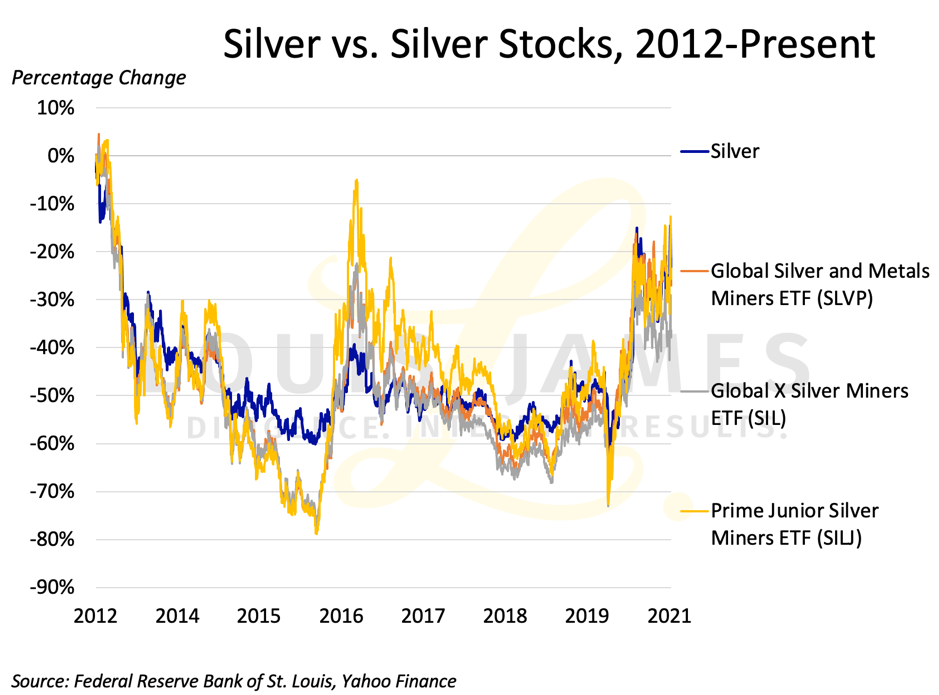 As you can see, silver has recovered a great deal since the Crash of 2020, but it still has a considerable way to go to reach new all-time-highs—even nominally.

But… the typical leverage has been largely absent over the past year.

This is clearer if we zoom in to a one-year chart. 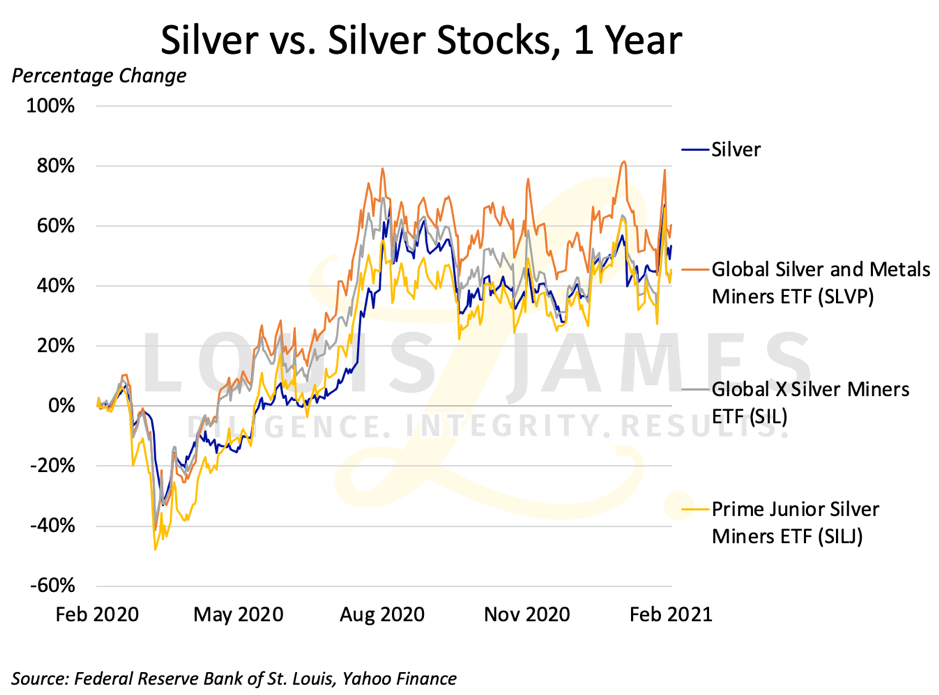 When gold and silver were rising from last March to August, silver stocks did outperform the metal itself—but not by much. Since then, they’ve all been tracking sideways, with the metal in the middle of the pack.

This tells me that when silver does break out again and sustains decisive upward momentum, it should really light a fire under silver stocks.

My fellow silver bugs and I could be wrong about this, but I'm putting my own money where my keyboard is on the matter. I've added several silver stocks to my portfolio over the last year, but with this in mind, I’m looking to add more to my Shopping List before the next big move upwards. There are several silver plays I’m monitoring for important exploration results that could make me willing to put my own money into them.

One thing I can tell you I’m not doing: I’m not rushing out to buy anything with “silver” in its name.

I’m a disciplined speculator, not a gambler. I’m only interested when I can see the odds being in my favor.

If you’d like some help with your due diligence on silver stocks, there are 48 of them tracked in My Take, as of this month’s edition. There are also 243 gold stocks and 41 uranium stocks, among the almost 400 companies covered so far. And I do take requests.

No arm-twisting on that. The idea—that silver stocks should soar way beyond the metal when the next breakout gets going—is yours free of charge.

I don’t know about you, but I want to deploy before that happens.