Silver: Rumors of My Death Have Been Greatly Exaggerated

There’s been a lot of what I see as fearmongering regarding silver. Some say it’s become just another industrial metal. The record gold-silver ratios we’re seeing are offered as evidence of this. I don’t agree.

I understand that central banks buying tonnes of gold every year—but no silver—says that the major players no longer see silver as a financial asset.

And I get that silver dropping about three times as much as gold in March—all the way down to $12—seemed like shocking proof of its demise.

The 10-year gold vs. silver chart shows that silver has fallen and just can’t seem to get up. 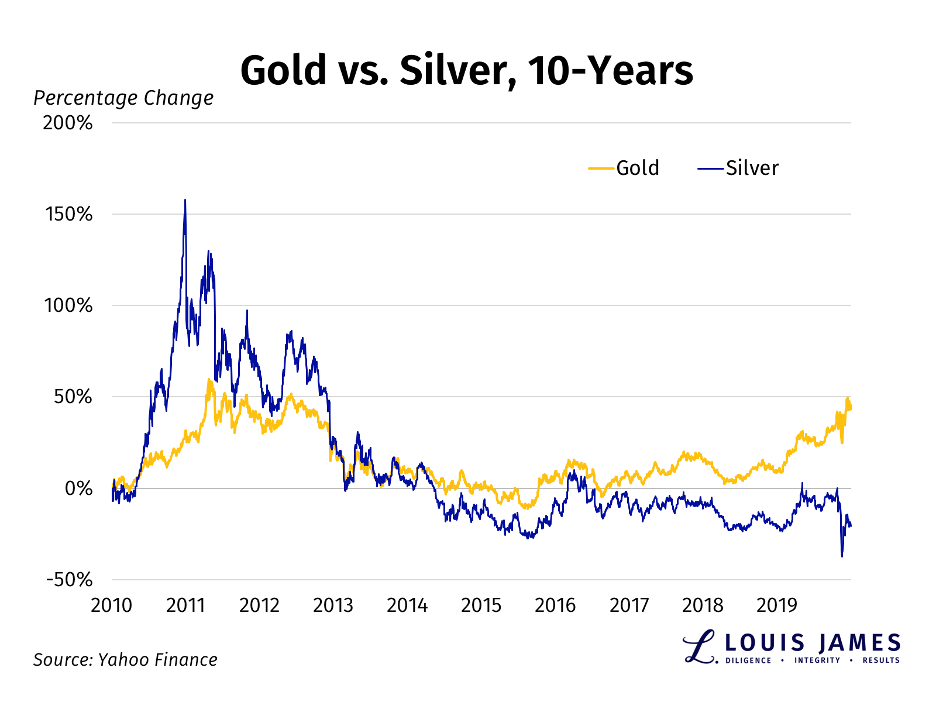 But I think rumors of silver’s death will prove to be much exaggerated.

Please note that I’m not promising another mini-mania—but I do see that card in the deck.

And if gold ever did go back into circulation as cash, the need for silver coinage to make change would send silver prices soaring. The gold-silver ratio might not just return to 80 or 90, nor merely 50 or 60, but all the way back to 20 or so. Governments would start hoarding silver again.

But let’s set that happy dream aside for now.

As the world is today, reduced mine supply should do a lot to counter reduced industrial demand, enabling silver to rise with gold… even if at a greater distance.

Let’s say gold rises to $3,000, as Bank of America projected, and stays there. Let’s also say that the current gold-silver ratio increases from the current 114 (as I type) to 125. That would take silver prices to $24 per ounce—a price at which many of today’s silver miners would gush cash.

Even if the gold-silver ratio went to 150, that would still take silver to $20, a price that would greatly improve the bottom line for today’s producers.

And if the gold-silver ratio were to go back to its pre-Crash of 2008 range—let’s say 60—that would take silver over $50 per ounce. Silver bugs would be breaking out the Dom Perignon big time.

I can’t say which of these scenarios is the most likely.

I can say that the data show us that silver still moves with gold, and in all of these scenarios, this is very bullish for silver.

I expect we’ll see silver lag gold on the next leg up, as usual, but I still expect silver to end up delivering larger gains on a percentage basis by the time this market peaks.