The megatrend for investors to monitor this year and going forward is the inflationary impact of recent and long-running easy fiscal and monetary policy. However, the war in Ukraine and the West’s extreme sanctions on Russia in response are unleashing whole new waves of global market disruptions.

Before diving in, I want to pause and stress that I’m not insensitive to the human catastrophe of this war. I have many friends and former students in Ukraine—as well as Russia and its close ally in the war, Belarus. I see it as an enormous tragedy for all.

That said, my focus in this service is financial, and I do see this sad turn of events having major implications:

The US and its allies are threatening to sanction any country that helps Russia evade sanctions, giving rise to a New Iron Curtain.

How far this New Iron Curtain extends beyond Russia, and how impenetrable it becomes is yet to be determined. But even just a few weeks old, it’s already huge.

With Russia largely kicked out of the SWIFT international payment system and its currency reserves abroad frozen, Putin has called the situation “economic war.”

According to the latest White House press release at the time of this writing, this is exactly the intention:

“The United States and more than 30 allies and partners across the world have levied the most impactful, coordinated, and wide-ranging economic restrictions in history. Experts predict Russia’s GDP will contract up to 15 percent this year, wiping out the last fifteen years of economic gains. Inflation is already spiking above 15 percent and forecast to accelerate higher. More than 600 private sector companies have already left the Russian market. Supply chains in Russia have been severely disrupted. Russia will very likely lose its status as a major economy, and it will continue a long descent into economic, financial, and technological isolation. Compared to last year, U.S. exports to Russia of items subject to our new export controls have decreased 99 percent by value – and the power of these restrictions will compound over time as Russia draws down any remaining stockpiles of spare parts for certain planes, tanks, and other resources needed for Putin’s war machine.”

Initial thoughts of focusing on Putin and his cadre, sparing the Russian people, have been left far behind. The stated goal now is to bring Russia to its knees with economic war, in an effort to end the shooting war.

One can only hope this doesn’t shift from global economic war to global military conflict between nuclear powers.

Dealing with World War III is beyond the scope of this article, but a quick point worth stressing is that the fact that we’re now closer to that possibility than we’ve been for many years makes me glad to have gold and silver bullion in my direct personal possession.

As resource speculators, however, the key point is that Russia has a “resource economy.” It supplies a large part of the world’s energy needs as well as many other minerals and commodities. So it’s no surprise to see commodity prices spiking since Russia’s invasion of Ukraine started on February 24, 2022. Just look at the recent vertical leap in this CRB Commodity Index chart from Trading Economics. 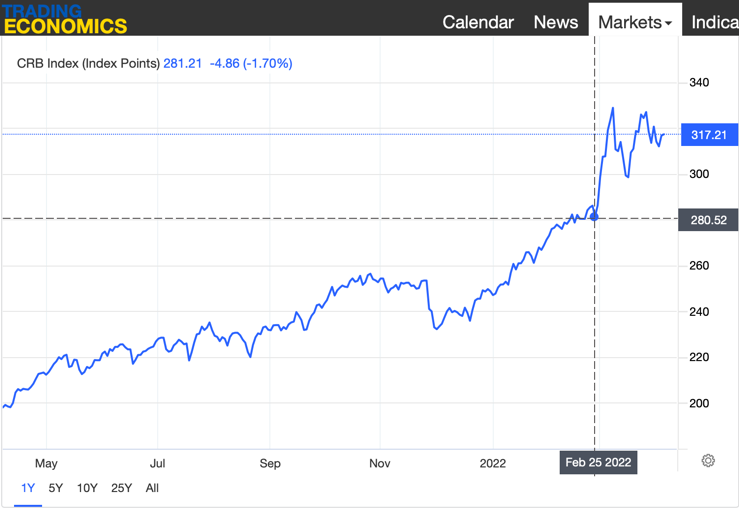 The index has fluctuated with news of escalation and peace talks, but the impact of the war is clearly visible. Note, however, that the vertical leap at the right follows the steep climb commodities have been on since last fall—when the Fed gave up its transitory nonsense.

That, in turn, is just a steepening of a trend towards higher commodity prices that’s been in place since the COVID-19 market meltdown of 2020. 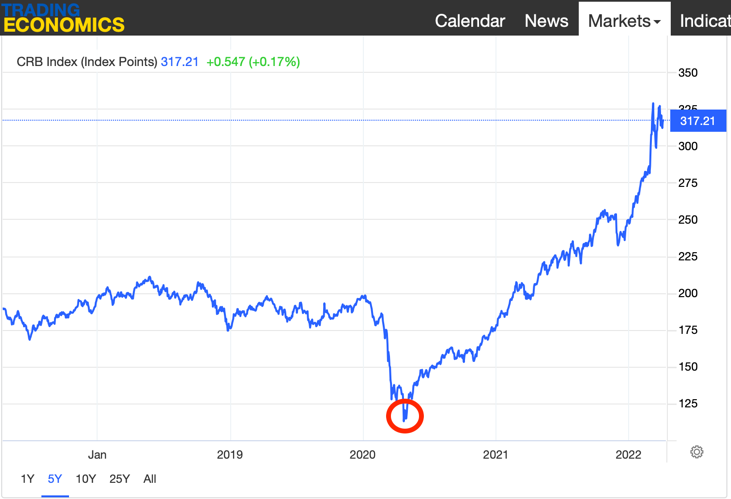 This is an important reminder that as terrible as the war is for those directly affected, it’s the persistent, high inflation that remains the fundamental driver of our markets today.

As speculative investors, we need to keep this in mind, as fresh CPI numbers are coming up for March. These are widely expected to reach “crazy” levels in the US, EU, and around the world.

This surge in inflation is happening before the Great Reopening really opens the floodgates of spending this Northern Hemisphere spring and summer—and now higher prices due to the New Iron Curtain will exacerbate and prolong the surge while weakening the global economy.

And there’s something else going on here…

The degree to which major businesses around the world (and smaller ones that don’t rate headlines, I presume) are shunning Russia is unlike what happened when Russia and Ukraine warred in 2014. The suspension of Mastercard and Visa, Apple Pay, McDonald’s, Coca-Cola, online gaming, top fashion brands, and on and on—I’ve never seen anything like it.

Virtue signaling in support of Ukraine among corporations is near unanimous, but I also believe the difficulty getting paid since the SWIFT sanctions went into play is a big part of this. And the mass marches in support of Ukraine that we’re seeing around the world will incent more of this sort of “self-sanctioning.”

Unless Putin is removed and Russia pulls a foreign policy U-turn—which seems unlikely—the New Iron Curtain is here to stay.

Recall that the global economy was already in uncharted waters due to the COVID-19 shutdowns. Add a war that has greatly deepened the divide between the world’s major powers, and the resulting economic chaos is impossible to predict with any accuracy.

One thing I’m sure of: it won’t be good.

And if the global economy slows under this additional burden even as inflation rages, we could see the stagflation I’ve been expecting—despite central bankers saying it’ll never happen.

Even China has just set its official GDP growth target for this year at its lowest level in decades—while increasing its fiscal stimulus.

So far, China hasn’t been sanctioned as a result of its support for Russia, but with anti-Russian sentiment soaring globally, that could change.

I don’t want to come across like a prophet of doom here. I’m not even calling for a market crash (though the potential for that remains elevated, in my view).

But the 800-pound gorilla of variables here is that China and Russia have been linked at the hip for some time. Economic ties with Western powers were already deteriorating, even before Trump’s trade wars.

I do not think China wants to see its trade further restricted.

I don’t think The Powers That Be (TPTB) in the West want economic war with China—that would unleash far greater devastation worldwide than the current dust-up with Russia.

And I don’t see Xi breaking up with Putin (not before he tries to take Taiwan, at least). And I’m sure he didn’t enjoy Biden calling him up to tell him what China can and cannot do.

But even if TPTB try to stay clear of the “nuclear option” of sanctioning China, trade with China may suffer anyway due to this self-sanctioning phenomenon sweeping the woke world.

However that plays out, the New Iron Curtain has long-term economic and investment implications, including permanently broken supply chains and higher input costs.

The global economy will be less efficient than it would have been, going forward.

I think this will be so, regardless of what policies the Fed, the ECB, or other central bankers employ, by the way.

Fed Chair Powell and other FOMC members are talking tough on fighting inflation, but their proposals are peanuts compared to the inflation they and Congress have unleashed.

In recent testimony before Congress, Powell admitted that the Fed had made a policy error—though it was no one’s fault, of course, because of the unprecedented times. But he also went out of his way to set up the Ukraine war as the latest excuse for not getting too aggressive with inflation.

I think the Fed and other central bankers know the global economy is weaker than they say and will continue doing too little, too late, remaining behind the curve on inflation.

I don’t claim to know how this will all play out.

I didn’t think Putin would try to take all of Ukraine, and that’s just my most recent lesson in humility.

So, for whatever it’s worth, my view remains that stagflation is the most likely scenario ahead.

If the global economy can shoulder the sanctions and keep growing, I see a reflationary boom as the next most likely outcome. That seems like a very big “if” to me, however.

What about a recession leading to deflation?

We might well get that recession if the economy buckles under the new weight being put on it—but that doesn’t have to lead to deflation, as the 1970s showed.

My take on this is that if a recession even seems to be starting, TPTB will reopen the easy money floodgates. A brief spike downward in official inflation would be followed by even higher inflation.

So… how do we invest?

I want to stress again that there’s great uncertainty and high volatility in times like these. That said, here’s the context for my investment own decisions now:

Note that I said, “monetary metals,” not “precious metals.” I mean gold and silver, which have a long monetary history. I do not mean any expensive metal that has never circulated as money.

As for the merits of various stocks as ways to speculate on these trends, I suggest a subscription to My Take. That’s our Consumer Reports-style publication that covers more than 500 resource stocks—and we take requests.

(If you’d like to know the stocks I’m putting my own money into, you’re welcome to give The Independent Speculator a try.)

No arm-twisting, no phony promotions, just an invitation.

P.S. To be kept abreast of more dangers, opportunities, and issues affecting investors, please sign up for our free, no-hype, no-spam Speculator’s Digest.