Why do I spend so much time kicking rocks? That’s geo-speak for kicking the tires on a mineral exploration project or a mine. It’s not because I’m a gold bug (though I am a hard money advocate). It is, in part, because it’s the market I know best.

The reason for that is important: speculating on natural resources has the potential to create fortunes like almost nothing else on earth.

When geologists head out into the field to prospect for gold, silver, or diamonds, they are quite literally looking for treasure. The same thing goes for other natural resources in the headlines, like cobalt, lithium, and oil. Discovering less-glamorous minerals like potash and iron can still result in huge amounts of value.

This is key. Valuable natural resources can be discovered, while other commodities must be grown or made. A tiny exploration company that makes a massive copper discovery can go from being worth nothing to being worth billions of dollars. But a coffee plantation must be planted, then grown over time. Similarly for a herd of cattle.

The market loves a discovery. In a bull market, bear market, or any market, a spectacular high-grade gold discovery (for instance) can make a share price double in a day. That may sound crazy, but there’s math behind it. When something goes from zero value to any value at all, the increase in value is mathematically infinite. When an exploration company goes from having nothing but a geological theory to having a multi-billion-dollar deposit, its stock can go up 5x, 10x, 20x, or even higher.

I’m not making this up to impress you. I myself have participated in 20x gains in my career. I’ve seen 50x gains. And my mentor, Doug Casey, bagged 100x gains on such events. I saw him make fortunes for himself and his clients. And I learned from him while he did it.

Sure, Bitcoin went up 20x in 2017, but that was a once-in-a-lifetime event. Natural resource discoveries result in such gains often, if not regularly.

Why? Because natural resources are essential, and yet their markets are highly cyclical. Gold and silver store wealth. Steam and coal powered the industrial revolution. Oil and oil-derived plastics transformed our lives in the 20th century. Nickel, cobalt, and graphene promise to take us into the future where electricity is “free” and new materials are lighter and more durable than anything we’ve seen. Natural resources have been, and always will be, in demand. But their prices ebb and surge, as does their production.

I’m not by any means saying that all natural resource speculations are great. There are thousands of exploration projects around the world at any given time, and only a few significant discoveries are made every year. Mark Twain made some bad investments in gold mining ventures, resulting in his famous remark that a miner is a liar standing over a hole in the ground.

What I am saying is that with proper due diligence, we can sort the wheat from the chaff in the resource sector. We’ll look at other sectors that have such potential—some tech developments can play out like a gold discovery, for example—but the resource sector is a main focus for us.

We’re on our own treasure hunt, identifying the companies that have a shot at delivering the exceptional gains we’re after.

If we could predict the future, our fortunes would be made. There’d be no need to speculate at all. Alas, it’s impossible for us to know the future, and making predictions is a very risky business. Usually.

The priests and kings of ancient Egypt made themselves phenomenally wealthy and built an empire. How? They learned that the Nile flooded annually, fertilizing the valley. Their ability to predict the flooding and the blessings of prosperity it brought was the basis of their power.

When something cycles, prediction becomes possible.

After the sun sets, it’s no great marvel to predict that it will rise in the morning and be right.

A better analogy might be that when you give your son’s back a push on a merry-go-round, you’re not surprised to be able to do it again in a moment. You might not predict exactly where your hand will land on his back, but you can predict that he’ll be around and you’ll be able to put your hand on his back. He might wiggle a little, you might push against his shoulder blade instead of his spine, but you get the job done. Or, he might fall off before he comes around again, and your prediction fails. But even so, it would not have been an unreasonable prediction.

There’s a similarly predictable cycle in the resource sector.

Could copper fall off the merry-go-round and fail to come around? Not really. There are only 92 naturally occurring elements on the periodic table, and copper is uniquely good at doing certain jobs. There might be a day in the distant future when new technology changes that, but that day is so far off as to be irrelevant. When it’s selling cheaply, copper is an excellent speculation.

Cycles like this only work for things that are necessary, like copper. When farmers can’t make money growing wheat or ranchers can’t profit from raising cattle, it’s a good bet that grain and beef prices will rise. But when the price of jeans that consist more of holes than denim falls, as surely it must, I wouldn’t speculate on it cycling back again. After the once-soaring market for “pet rocks” collapsed in the 1970s, it never recovered.

Have a look at this chart, showing the prices of several of the most important commodities over the last 15 years. There’s a lot of “noise” over time, and some have trended higher than others. Still, as you can see, the direction of their moves tends to be the same. This is widely known as the commodities super-cycle. The key takeaway for us today is on the right-hand side of the chart. The overall trend is clearly upward—or it was until the Crash of 2020. 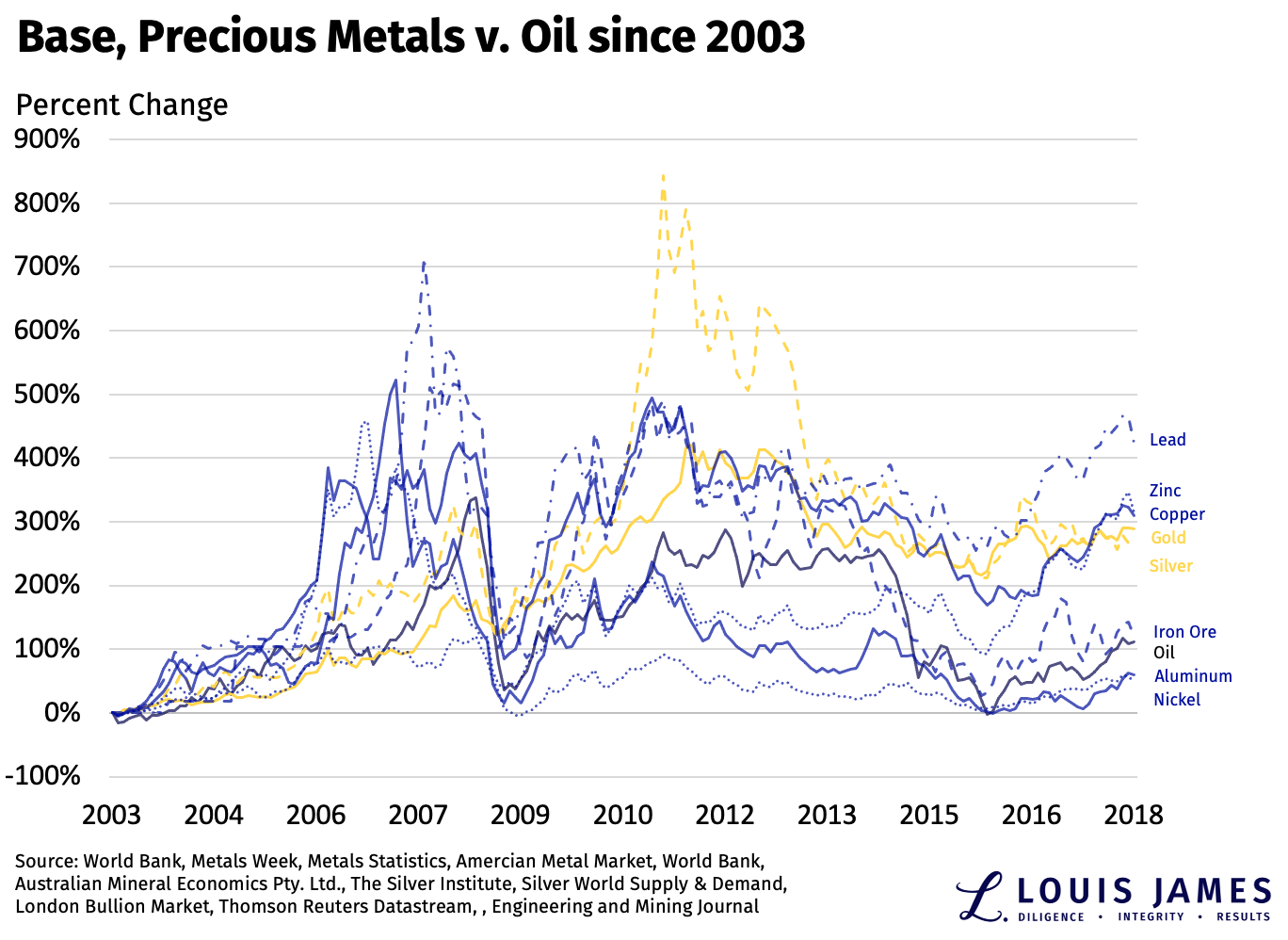 The Crash of 2020 has been great for gold—which makes sense, given its unique status as the ultimate safe have asset—but not for industrial commodities. That’s creating a special set of circumstances at the time of this writing. The general point that will last beyond the moment, however, is that the reason famous speculators like Doug Casey focus so much on natural resources is that they are highly cyclical. Except in the short term, they tend to be predictable. And that means we can make money speculating on them.

For most investors, volatility is a bad word. It rears its ugly head when things don’t go according to plan. But for speculators, volatility is a great thing. As explained in our Speculation 101 report, this is in part because it helps us buy without having to time the market perfectly. But there’s more to it.

Think about the price of things like shoes. They tend to be relatively stable. Prices rise over time, roughly with inflation. (A good pair of shoes cost $12.95 in 1960. That’s $108 in 2018 dollars.) There’s not a lot of profit to be had from buying warehouses full of shoes, speculating that footwear prices will leap the next year—or even rise enough to pay for the warehouse.

In contrast, natural resource commodities not only tend to be cyclical, they tend to be highly volatile. Copper, uranium, or cobalt—these prices don’t just rise with inflation, they go vertical when supply is short. Copper went from $0.61 a pound in 2001 to $4.53 per pound in 2011. Adjusted for inflation, the price rose by 481% in that time.

This kind of volatility delivers terrific gains for speculators who predict the underlying price movements. Note that we don’t have to know how high copper or any other resource commodity will go. We don’t even need to know exactly when it will rise. We just need to know that it’s cheap, build a position, and then wait to be right.

Answering this question is the substance of our work in the Independent Speculator. As we like volatile, cyclical markets, the answer won’t be the same every year. However, here in early 2020, there are two areas we’re focusing on, while others are on hold, due to the extraordinary economic shutdowns related to the COVID-19 outbreak.

Current market conditions make me want to invest in precious metals. There are three main reasons why:

Note that when I say “precious metals,” I mean gold and silver. Both are also monetary metals. That is, they are not ordinary commodities like coffee or lumber. People see them as a form of money. They are financial safe-haven assets. They are history’s longest-standing means of preserving wealth.

This is not so for platinum, palladium, rhodium, or some of the other relatively rare, expensive metals that could be called precious. The prices of these other metals are largely set by their industrial use. Platinum prices, which have dropped below those for gold—and even palladium—illustrate this point quite clearly. There’s nothing wrong with speculating on these other metals when their supply falls below demand, or when commodities as a group are rising. But it’s a mistake to think of them as monetary metals like gold and silver.

The world’s most hated, but absolutely essential commodity, uranium, has just broken out of an already rising trend. 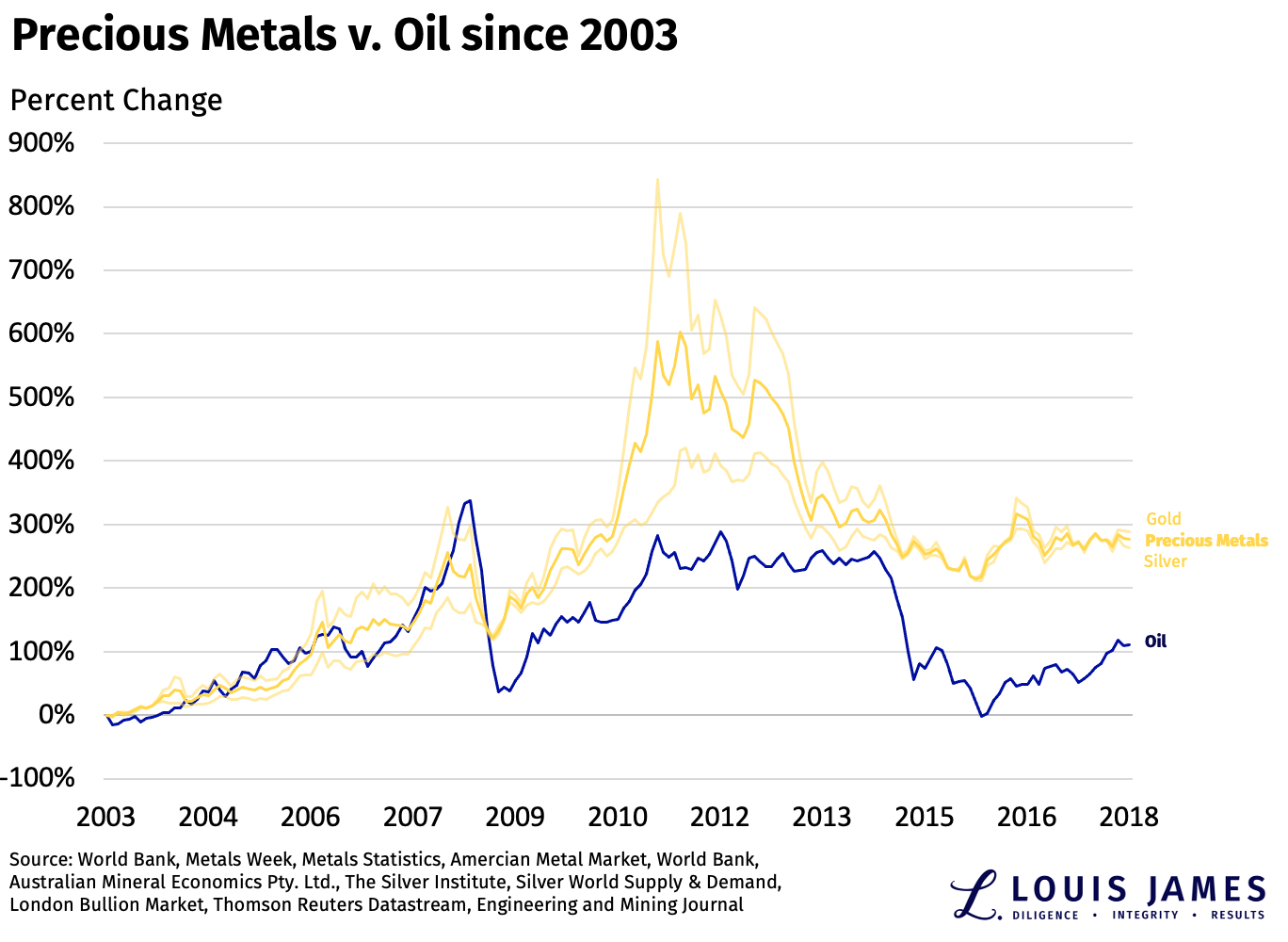 Normally, I’d be cautious about jumping on the bandwagon after such a sharp increase. However, current prices (in April of 2020) are still well below the average cost of production and many of the best uranium stocks are still deeply discounted. This, combined with a mine supply deficit that has lasted years makes me bullish on uranium for years to come. That COVID-19 shutdowns have substantially reduced supply for this year is a bonus, not necessary for this upward trend to continue.

Up Next: Energy Metals

The crash and global economic recession of 2020 have me stating away from industrial minerals this year. However, they are essential and prices will cycle back up in due course. I’m particularly interested in speculating on the world-wide shift from burning hydrocarbons to what used to be called “alternative” energy. This is one of the biggest, strongest megatrends in recent decades.

A powerful force backing this trend is governments in increasing numbers around the world pushing for “green” or “renewable” energy. But the shift in thinking is also gaining ascendancy among the people themselves. It’s not just smartphones and other cordless gadgets, it’s electric cars and trucks that are becoming objects of desire all around the world.

This is a big topic. Here are a few key points:

The devil is in the details, of course. I’ll be covering those, metal by metal, as I make my investments and write about them in the Independent Speculator.

The thought I want to leave you with is that all of these trends are very strong.

That’s why I’m focused on these resource commodities now and going forward.