Is the Sprott Physical Uranium Trust a Ponzi Scheme?

There’s a lot of ill-informed commentary flooding financial channels on social media about the new Sprott Physical Uranium Trust (U.U.TO, SRUUF, but affectionately known as SPUT). That’s no surprise, as it’s the most exciting thing that’s happened in the uranium space since the great price spike of 2007. 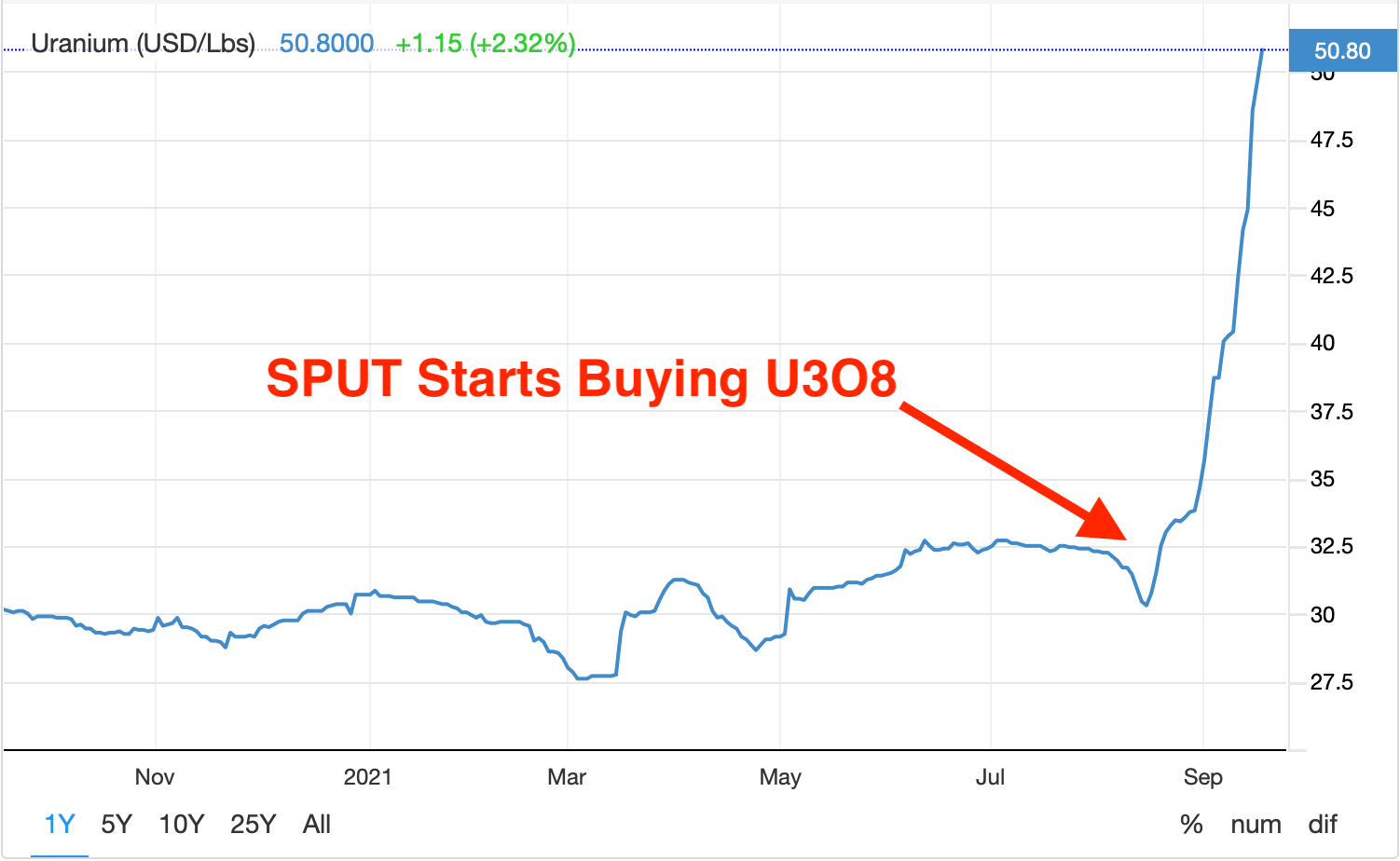 SPUT’s initial $300-million capital raise and buying spree has had such spectacular results, the company has increased its facility to $1.3 billion. SPUT may end up causing an even greater spike than the one in 2007, which made many speculators rich.

That’s not a prediction.

But it is a possibility.

What are the odds?

Hard to say. But SPUT’s mission and structure make it so that capital inflows and premium to NAV are converted into physical uranium holdings. When investors pile in, SPUT buys more uranium.

Contrary to some reports, there is no set premium to NAV that the company must maintain; buying is at the manager’s discretion.

That’s important. Management is not forced to buy no matter what the price offered is, if they determine it would be strategically advantageous not to do so. (Full disclosure: I had this wrong before, having headed incorrect reports.)

That said; SPUT’s raison d’être is to buy and hold uranium for investors. It’s possible that if investors turned extremely bearish (if, for instance, there was a major nuclear accident), they might prefer the company to hold on to cash than to buy more uranium. But absent such a dire circumstance, I don’t see it happening.

SPUT is here to buy uranium and I expect it to continue doing so.

And since the supply of cheap uranium has evidently been bought up, SPUT’s buying keeps sending spot uranium prices higher. This attracts more investors to SPUT, creating a virtuous cycle.

But trees don’t grow to the moon.

At some point, higher uranium prices will bring more sellers to the market.

Speculators who bought uranium at $18 in late 2015 might be delighted to sell at $70, $60—or now. But there is only so much physical uranium inventory available for sale. There is no such constraint on how much uranium SPUT could buy, as long as investors keep piling in.

And that has many seasoned investors shaking their heads.

I can understand why. It sounds too good to be true. I view skepticism as a prime virtue for successful speculation. Indeed, when some uranium bugs got very excited about Sprott taking over the former Uranium Participation Corp. and turning it into SPUT, I cautioned against assuming that it would have any great impact on the market.

Not to sound defensive, but I was right about that. The creation of SPUT didn’t have much visible impact on the market at the time. It was later, when SPUT announced the first $300-million at-the-market financing to buy physical uranium off the spot market, that the market really took off.

At any rate, as I type, the SPUT-powered uranium rocket shows no sign of slowing. Skeptical investors are starting to worry. Some ask what happens when this SPUT-Spot cycle goes into reverse. Some are even calling it a Ponzi scheme.

No market trend lasts forever, of course. What we have is a big new buyer entering a tiny market. That’s not a trick or a Ponzi scheme.

What we’re seeing is simply the natural results of the law of supply and demand—when there’s a sudden increase in demand.

But what happens when more sellers do emerge?

What if uranium prices drop?

Will SPUT be forced to sell?

There are contradictory rumors circulating online about this, so I checked with management. Straight from the source:

“The only circumstance under which SPUT would sell uranium would be if it were necessary to cover the expenses of the Trust. SPUT’s mandate is to accumulate physical uranium and sequester it. Not to return pounds to the market. There is no physical or cash redemption option on SPUT.”

In short, the only selling would be in small amounts if (ever) needed to cover operating expenses.

In other words, SPUT is a one-way deal; the pounds it buys are effectively off the market.

So, what happens when more sellers emerge?

If there are enough of them, SPUT’s buying stops pushing prices higher.

What if uranium prices drop?

The best thing about all of this is that the uranium market was already on the mend before SPUT exploded on the scene.

It’s one heck of a tailwind, but SPUT is a tailwind, adding to a market that had already been moving in the right direction for 5 years.

That’s why, whatever happens with SPUT, I remain a uranium bull.

That’s no reason to chase the stocks, of course.

As I type, bidding for uranium on the spot market has topped $50 per pound—but most of the stocks are off sharply with the broader markets.

This sort of normal correction is an opportunity for those new to the sector.

Which stocks? I don't give away free stock picks—and I think investors are wise to be wary of those who do. No arm-twisting, but The Independent Speculator has a portfolio of what I think are the best uranium stocks on the market. You're welcome to subscribe.

As for taking profits, don't let greed make big gains on paper slip through your fingers. Recovering one's initial investment and going risk-free in a speculation is not the same as lacking conviction in a trade. It can provide funds for new speculations.

I don't think my normal Upside Maximizer triggers on share prices are the right way to go during a spike like this. I'll be looking at uranium itself. When it takes a breather, that's when I plan to lock in some of the big wins I've not taken profits on yet.