It’s a mistake for “dollar bugs” to sell gold based on the “strength” of the US dollar in foreign exchange.

The relative position of various fiat currencies in the race to debase is almost meaningless. It matters much more that all currencies are being debased, losing value in terms of real things in the world—like gold, silver, copper, oil, real estate, food, and so on.

The DXY US Dollar Index is simply the wrong measure for the value of gold.

I’ve also written that various factors can cause the world’s best inflation hedge to fail to correlate on a short-term basis with government-reported inflation trends. The incorrect use of the DXY as a yardstick is one example. Gold’s tendency to lead inflation is another. Jolts of fear from wars and the like can be another. The state’s incentive to lie about inflation is another. And don’t forget that far from being efficient, markets tend to overshoot, with investor emotions routinely resulting in extremely overbought and oversold conditions.

It’s not just markets that are messy. An economy is not a precision machine on which would-be economic engineers can pull the levers and directly—or even reliably—achieve desired results. It’s actually the sum of human action of all its participants, each with different individual goals, preferences, and reactions to events and conditions. This can be guesstimated statistically, but it’s inherently chaotic and prone to sudden, drastic changes.

If you want to think of it mechanistically, I’ve said it’s more like an irregular mass of explosive gum and rubber bands. It’s hard to predict—let alone calculate—exactly what will happen if we push or pull on it in any given way. And yet, the center of mass does respond to pressure and move in not entirely unpredictable ways.

For instance, if governments around the world print money with abandon, sooner or later, prices in aggregate in the real world will rise.

In short, it’s not that there’s no relationship between real things of value in our physical world and the constantly eroded, state-enforced value of fiat currencies. It’s that it’s non-linear, responds with variable time lags, and is subject to politically-motivated misrepresentation.

At the end of the day (or economic cycle), however, reality matters.

If you pull back and look at the big picture, you can see why I say these things. The reality of gold delivering as an inflation hedge over time is stark and undeniable. As you can see in this chart, X marks the spot. 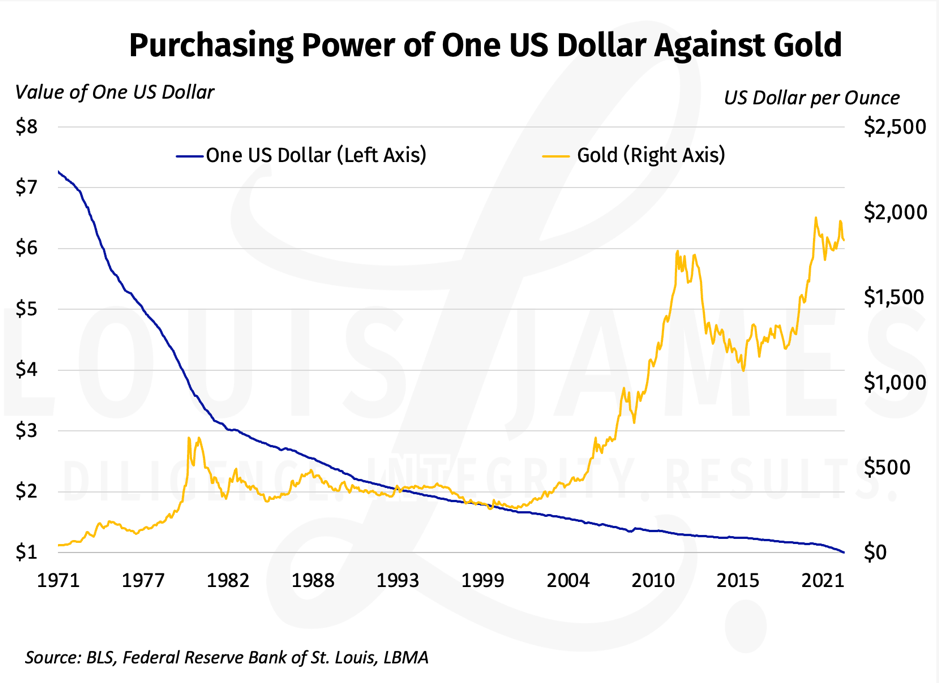 I’m aware that one could say much the same of food, metals, oil, and other commodities. But that’s just the point: inflation is visible in all real things. This is why things like the gold-to-oil ratio and gold-to-copper ratio tend to fluctuate within defined trends.

Gold just happens to be a particularly useful yardstick, since it’s been used as money for thousands of years.

I remember buying 99-cent loaves of bread to make sandwiches for my children around the turn of the millennium. Today, the average price in my local grocery store seems to be about $5.

Gold hasn’t changed at all. An ounce of gold is an ounce of gold. I can hold it in my hand. I can—and have—used it to make jewelry (wedding rings). Or I can sell it in case of dire need—or opportunity. I’ve done that as well.

Gold and silver aren’t “up.” It’s the US dollar and other fiat currencies that are down. This is why I save in bullion.

It’s also why I think the gold-dollar exchange ratio is likely to rise over the next few years (at least). That’s the natural result of reckless money-printing on the irregular mass of explosive gum and rubber bands we call the global economy.

We should not let the short-term noise distract us.