Years ago I gave a talk on how essential discipline is to speculators. When I came off stage, I found legendary speculator Rick Rule in the wings. He told me that my talk should be required material for all speculators.

So here it is…

Readers of my past work know that I sometimes use idle time to play solitaire on my phone. When there’s no wi-fi, no book to read, no interesting person to talk to, and no energy for creative thinking, I dislike simply sitting around.

Standing in line at an airport one day, I discovered something: the game didn’t count the hands I didn’t play.

This reminded me of mentors like Rick telling me that speculation is like playing baseball with no called strikes. That means a batter can stand there without swinging until the pitcher throws an easy ball. Similarly, speculators should be patient and bet only on the best opportunities.

But it’s one thing to understand the logic of something, and quite another to experience its power, personally. And personally, I was never very good at baseball. I couldn’t tell when the ball was to my advantage. I could rarely hit it when I thought it was. And even when by some miracle I did hit the ball, I had absolutely no control over what happened next—which was often better for the opposing team than my own.

Not so with solitaire. There are only 52 cards. Physical skill in turning them makes absolutely no difference at all to the outcome. It’s all about determining the criteria that increase the odds of success and sticking with those criteria. Discipline. My favorite thing.

Some years and an embarrassing number of games later, I’ve gotten pretty good at the game. I know what criteria increase the odds of winning. I can win 90% of the time if I play only the very best hands I’m dealt.

This is a great metaphor for speculation. There’s no penalty for the hands I don’t play, just as there’s no cost for the speculations I don’t make. After studying the resource speculation game for 15 years, I’ve gotten pretty good. I know what criteria increase the odds of winning.

I’ve even found one strategy—the pre-production sweet spot (PPSS)—that works more than 70% of the time. (More on that another time.)

But there’s a problem that affects both solitaire and speculation. The odds of getting a “perfect” hand are so low, one rarely gets to play. If I ratchet my criteria up to the strictest level, I spend almost all of my time reshuffling the deck. That’s just as boring as standing in line at an airport with nothing else to do. As an investor, the odds of a “perfect” speculation are so low, one could wait decades before seeing one—if one ever did.

Fortunately, Pareto’s Law (the 80-20 rule) applies. If I play the best 20% or so of the solitaire hands I’m dealt, I can win about 80% of the time. Playing one in five hands, or even ten hands, is a small price to pay for an enjoyably high success rate. It sure beats standing in line doing nothing. 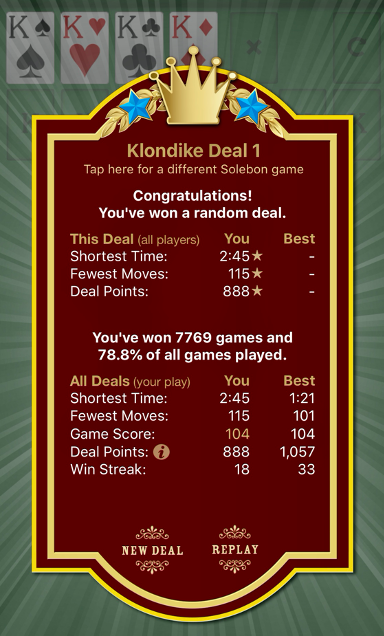 Okay, it’s not quite 80%, but this 78.8% includes my learning curve—and it was still improving the last time I stood in a line.

Let’s translate this into investment terms. For simplicity’s sake, let’s say every speculation I make is $1,000, and the outcome is a double if I win, and a 50% loss if I lose. Let’s also say that if my criteria are strict enough, I can achieve 90% odds of winning—but only once per year. (That’s being very generous.) But if I set my criteria a little looser, I can find 10 opportunities per year, and win 70% of the time.

What happens after 10 years?

Yes, I had to invest a lot more. And yes, I lost more. Of course I did; the success rate was lower. But I also made a lot more money—almost six times more.

In the real world, waiting for a high-yield speculation with a 90% chance of success could be a decades-long wait. It could mean never speculating at all.

Even the ones with a 70% chance of winning only come along once or twice per year. But they do happen, and we can increase our returns by focusing on them.

The other thing to remember is that even when we speculate on a stock with lower odds of success, our upside is not limited to 100%. As per my Speculation 101 report, the successful speculators I know expect to take more losses than gains on the stocks they buy. But the home runs (the 10x, 20x, and even higher winners) more than make up for the losses.

This is important, because I don’t speculate only once or twice per year. I know this means I will take more losses as I go than I might otherwise. I accept this because it’s the price I pay for making more money on a yearly basis.

The good news is that you don’t have to follow my lead in this. Even if you do subscribe to The Independent Speculator to see what I’m putting my own money into, you can and should set your own criteria.

Aim for the success rate you want and stick to your criteria.