How Does a World Reserve Currency Recover from Crisis?

When people lose confidence in paper money, an irreversible slide ensues. That makes sense, since the paper actually is worthless. Legal tender laws can force people to use fiat currencies, but not to value them.

So how does hyperinflation end?

Badly, of course. But more specifically…

When the Yugoslavian dinar went into hyperinflation in the early 1990s, the inflation rate peaked at 116.546 billion percent in January of 1994. This ended when people switched to German deutschemarks, and the government bowed to that reality.

The infamous hyperinflation in Zimbabwe peaked at 89.7 sextillion percent in November of 2008. The government then gave up trying to print $100-trillion banknotes, effectively adopting the US dollar. 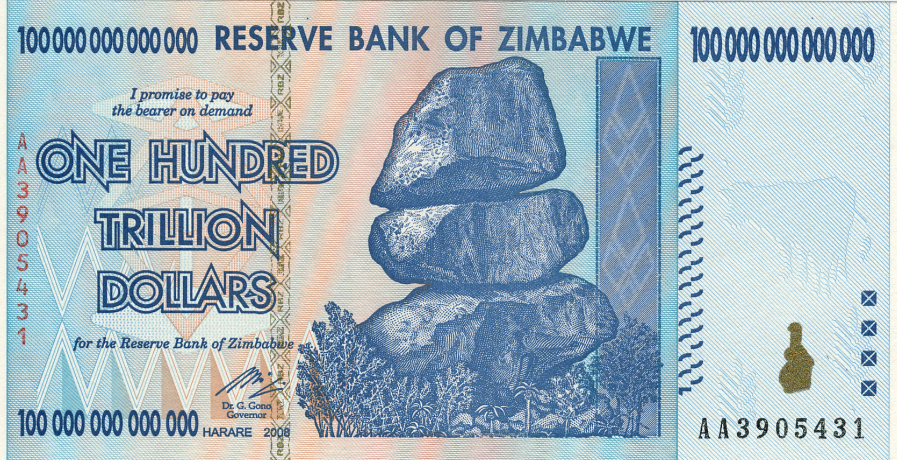 The lesson from these and similar events in history is that no paper money ever comes back from hyperinflation. One way or another, a new currency has to be adopted—backed by something people do have confidence in.

But what happens when a world reserve currency goes into hyperinflation?

Well, we don’t exactly know yet.

Many European countries abandoned the gold standard as they struggled to pay for World War I. This included the UK, and the pound gave way to the US dollar—which was still backed by gold—as the world’s leading currency. The pound lost a lot of purchasing power, but didn’t suffer the hyperinflation that Germany so famously did after the war.

The US dollar has lost a lot of value since then, of course, but a few events stand out. During the Great Depression, Franklin Delano Roosevelt devalued the dollar from $20.67 to $35 per ounce in January of 1934. That’s also when he issued his infamous executive order confiscating gold coins, bullion, and notes.

In 1944, reassurances that the dollar was as good as gold—for countries, not people—got the world to officially switch to settling trade imbalances in dollars instead of gold via the Bretton Woods agreement. But in 1971, Richard Nixon broke that promise, taking the US dollar entirely off the gold standard.

Complicating matters greatly is that the global economy is far more interconnected today than it was 100 years ago. When the pound lost its gold backing in WWI, other countries simply switched to a convenient alternative. Today, the US dollar is more than the world’s designated reserve currency used to settle trade imbalances. Several countries use the US dollar as their own currency. Others peg their currencies to the US dollar. Commodities are priced in USD. And for now, the petrodollar system keeps the US dollar at the center of global finance.

If people around the world ever lost confidence in the US dollar and it went into a hyperinflationary death spiral, the consequences would be huge and hard to predict—for pretty much everyone in the world.

Whatever catastrophe could take the US dollar down wouldn’t leave other fiat currencies unscathed.

If I’m right about none of the causes of the 2008 crash having been fixed—and indeed having been made worse—the next economic crisis will also be global. And pretty much every central bank in the world has already shown that it’s willing and ready to debase its currency to try to gain economic advantage over other countries.

Given that “race to the bottom” scenario, it seems very unlikely that people will simply switch to the euro or yuan when the US dollar goes down.

In a global financial crisis that causes the US dollar to go into hyperinflation, would anyone really believe that switching to another piece of paper (with nothing behind it), caught in the same race to the bottom, would do any good?

IMF SDRs are no better, just being a basket of other fiat currencies.

And who would believe government promises not to inflate any cryptocurrencies they might create? Bitcoin itself might be inflation-proof, but there being no limit on the number of cryptocurrencies that can be created, I’m skeptical of the scarcity argument there.

I just don’t see anything that could stop the slide for a world reserve currency suffering hyperinflation that’s not a tangible, real-world value.

I’m not predicting a new, official gold standard just around the corner.

I am saying that history tells us that it would take something like gold to stop hyperinflation in the world’s reserve currency.

If that happens, the benefits to those who own physical gold and silver bullion are obvious. The disastrous consequences for those who don’t own any are equally obvious.

If you’re reading this article on my website, IndependentSpeculator.com, you probably agree with me. But you almost certainly also know people who would say: “Sure, but that will never happen.”

If you care for such people, I encourage you to remind them that in 2008, global financial systems came close to seizing up entirely. The US dollar may be the highest point on the sinking ship of fiat currencies, but that ship is sinking—and nothing lasts forever.

Sensible people should not ask whether it’s a good idea to protect at least some of their wealth with the compact, physical value that is gold.

The vital question is whether anyone can afford not to.