There has been a significant change in the gold market this year; the gold-dollar exchange rate (aka “price of gold”) has started responding directly to “dollar strength” in foreign exchange instead of interest rates.

This was undeniably on display last week when the FOMC announced no policy changes, but Powell said they’ve begun “talking about talking about” tapering in a couple years. Though reasonable—and inevitable, at some point—the taper talk was apparently not expected. Interest rates spiked immediately. So did the US dollar, as measured by the DXY index of the USD on foreign exchange markets. Gold dropped as robotic traders responded with robotic lack of intelligence.

But here’s the thing…

The USD kept right on rising while interest rates went into reverse and fell with gold. 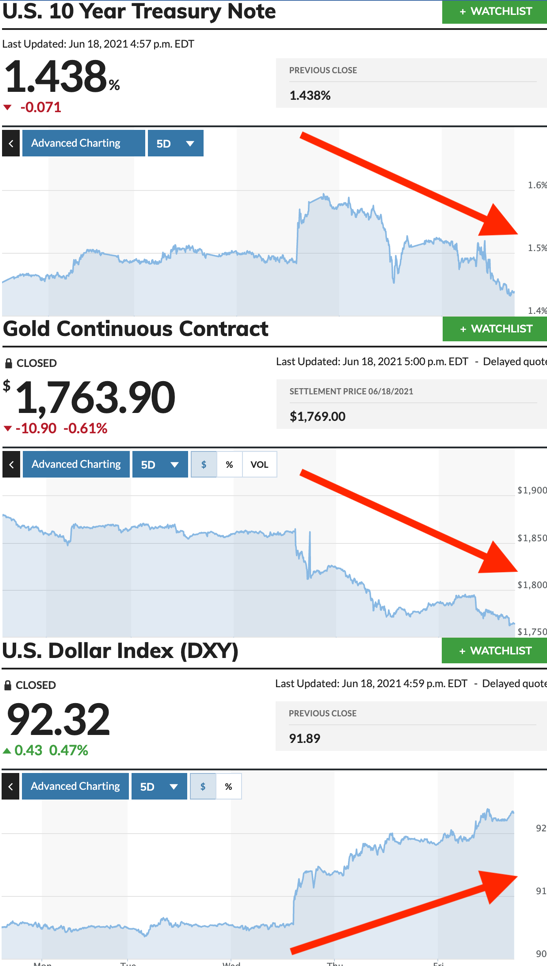 Why is this exciting?

Because, for 50 years—ever since the US went completely off the gold standard—the strongest driver of the gold-dollar exchange rate has been real interest rates (inverted), not the US dollar.

Why? Because with gold demonetized, it came to be seen as a safe-haven asset like a bond, rather than as a currency. And bonds pay interest, while gold does not. That makes the real rate of return on a bond a powerful determinant in investors decisions of which safe haven to own.

That makes reversals like last week’s quite notable. But that was only over a couple days’ trading action. Could it have just been meaningless daily volatility?

The inverse relationship between gold and interest rates has been breaking down all year.

(I’ve been following this development in recent editions of my free weekly letter, the Speculator’s Digest. If you’re not getting that, I do recommend signing up, as it contains original analysis not published elsewhere. And we don’t spam readers with a daily barrage of hype; you get one, value-packed email per week.)

If we pull back and look at these three variables—the US dollar, gold, and interest rates—over the last three years, we see that the lines for gold and the US 10-year are much more closely inverse than those for gold and the dollar. 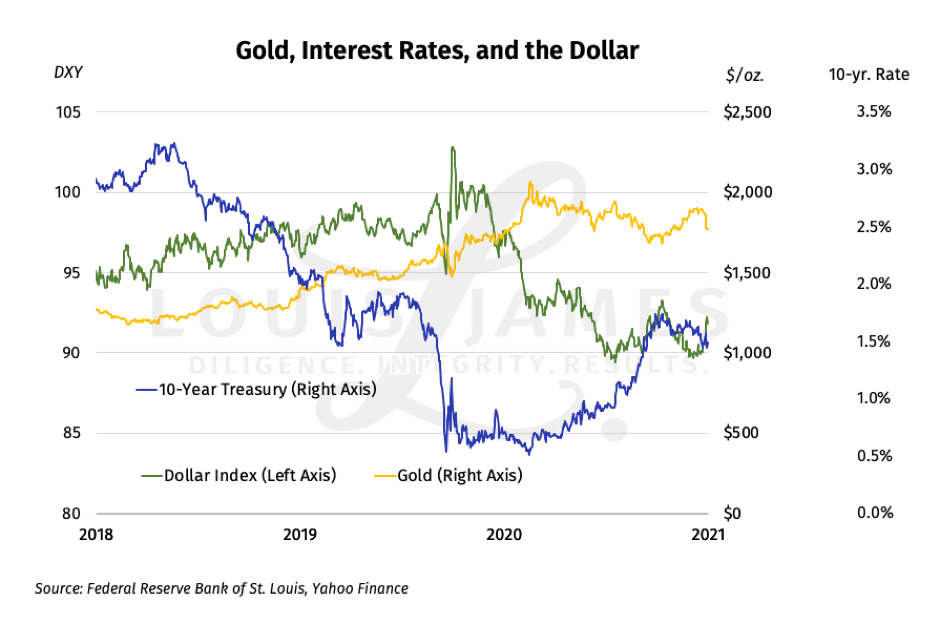 Over this period, it’s the US 10-year and gold that look much more like mirror images. This is what’s normal. It was a period of low inflation as measured by CPI, so real rates and nominal rates tracked closely. Indeed, over the first two thirds of the chart, gold and the dollar were trending upward together, while interest rates were falling. That shows the usual dominance of rates, not the dollar, on the gold market.

But this longstanding pattern has broken down in recent months. Here’s the same chart, zoomed in on the last quarter. 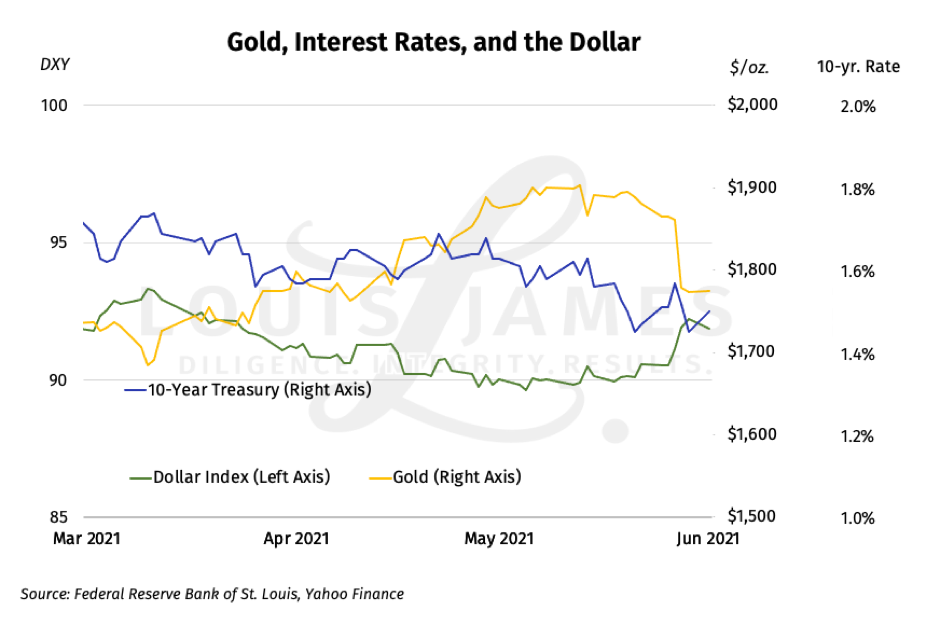 It’s a bit noisy, but the US 10-year is periodically down with gold. Other days, the two rose together. The stronger inverse pattern now is clearly visible between the dollar and gold.

Why is this happening?

The theory I’ve been developing is that gold and silver futures traders are starting to question their use of the 10-year as a proxy for real rates. Some are going directly to the dollar. That wouldn’t be because they suddenly believe in gold and silver as money, but because The Powers That Be (TPTB) keep telling them that CPI numbers aren’t real this year—just transitory phantoms.

But there could be more to it…

It may be that some major institutional players just don’t care anymore that “gold doesn’t pay interest.” Sovereign wealth funds, large family offices, and even some supposedly friendly central banks may be seeing the US dollar as riskier than they like these days. And so, on days when the DXY stokes their dollar fears, more of them buy gold.

That’s just a guess on my part. But even if it’s not happening yet, I do think it will happen sooner or later.

What I do know is that gold—which is still a form of money that competes with dollars, whether TPTB like it or not—has started trading more directly inversely to the dollar this year.

Why is this important?

Well, if you’re a dollar bear, this new pattern is very bullish for gold, and needs no elaboration.

If you’re not yet a dollar bear, I’d argue that you should be. Sure, everyone’s in the race to debase. But I think the US has printed more money and sent it directly to voters (consumers), which means it may “win” the next lap in the race.

Look back at my three-year chart above; the US dollar (the green DXY line) has been sharply down on foreign exchange markets over the last year.

More important is that the dollar has been in decline ever since 1971, when Richard Nixon took the US fully off the gold standard. 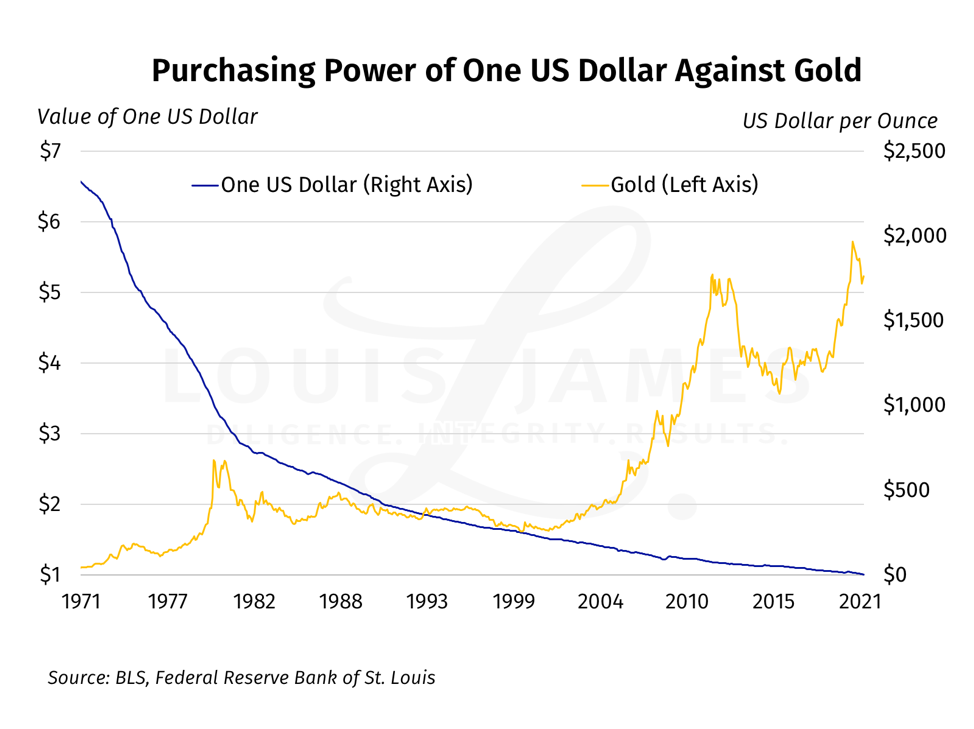 It doesn’t show on the long-term chart above, but US policy has greatly accelerated the dollar’s debasement over the last year. Consider the Fed’s balance sheet, which has now officially hit $8 trillion in response to monetary policy. 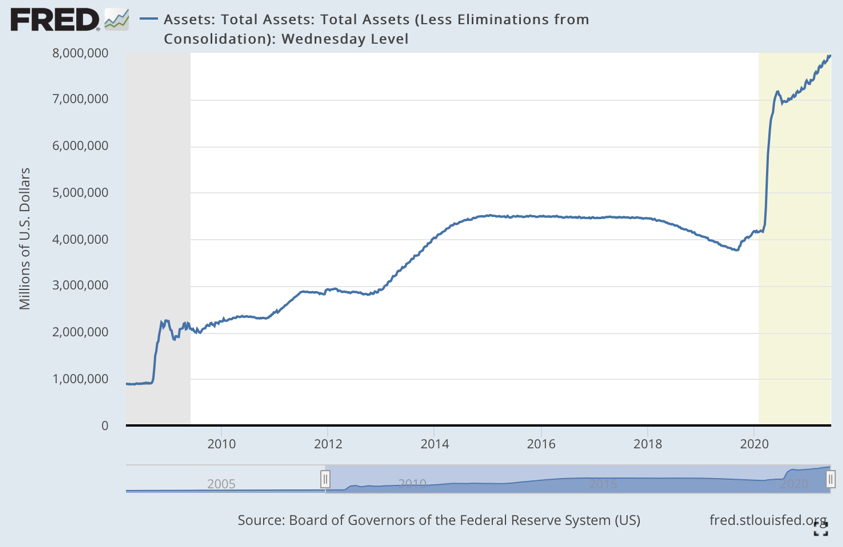 And then there’s the national debt, which hit $28.1 trillion by the end of Q1 2021, kicked vertically upward by fiscal policy. 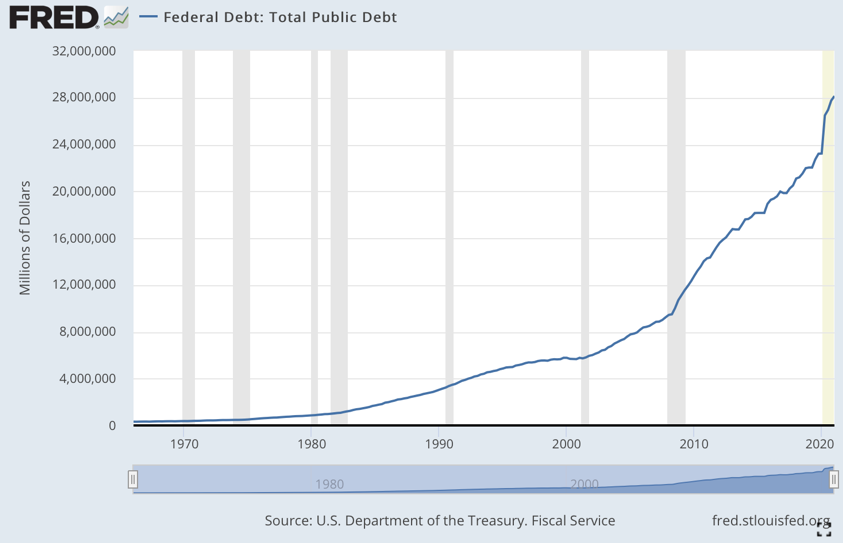 Almost nobody cares about these trends today. Mainstream economists never talk about them.

I honestly don’t know—and I wouldn’t believe anyone who said they did.

The Soviet Union lasted longer than it should have. And yet, long after many of us had given up hope of seeing its economic insanity end in our lifetimes… it finally did. I don’t know when, but I do expect this to happen to the economic insanity in the US (and other countries, to be fair).

But look at those last two FRED charts again—things are happening much faster now.

To be clear, I’m not saying that the US is facing imminent collapse as the USSR did in the late 1980s. (Though, as a student of history, I know it could be so. All great powers peak and then fall.)

I’m saying that there’s evidence that the US dollar is pulling ahead the current round of the race to the bottom.

If foreigners and their central banks pivot to other currencies, the USD could win by a country mile. But even if not…

“Winning” this race means that the dollar falls—and market action is telling us that’s bullish for gold.

And what’s good for the golden goose is likely to be even better for the silver gander—silver also being a vital energy metal.

But why, as shown in the first charts above, did the dollar rally on news of higher inflation last week? Isn’t inflation a measure of the loss of value of the dollar?

Well, yes, but remember that the dollar’s rise in foreign exchange markets doesn’t necessarily mean that it’s worth more. It only means that holders of other currencies are choosing to sell them for dollars. By today’s conventional thinking, the fact that Powell admitted that the FOMC is beginning to think about tightening policy means that the Fed expects the US economy to strengthen substantially. That increases demand for dollars.

I don’t think this will last.

The inflation we’re starting to see isn’t evidence of a strong economy, but of monetary debasement.

Sure, the economy is rebounding and will rebound even higher once the post-COVID-19 shutdown reopening.

But that doesn’t make it strong.

Well, you can’t have it both ways.

Think about it. By conventional thinking, if the inflation is supposed to be transitory, doesn’t that mean that the recovery that’s responsible for it must be transitory as well?

In a way, this is exactly what the Fed is saying. It’s why the FOMC thinks it’s appropriate for the Fed funds rate to be nailed at zero at least until 2023. It’s why the Fed keeps pumping $120 billion in liquidity into the system every month.

But many investors and traders evidently don’t see—or choose not to see—this. They seem to think that the Fed is signaling that the next boom is a done deal. So, for the moment, they want more dollars and fewer alternatives.

The big question is: “What happens when the post-shutdown rebound fades?”

The lockdowns brought years of durable goods orders forward. How will the economy do when that torrent of home buying, car buying, household goods buying, etc. slows to a trickle? And after the expected surge in travel this summer and fall, how will the global tourism and hospitality businesses look?

Truth is, no one really knows.

My Austrian-inspired view is that money supply does matter. And I’m convinced there will be long-lasting damage from shutting down the world’s fragile, deeply interdependent economy.

After the post-shutdown surge, the enduring effect of 2020 will be a weaker economy, not a stronger one—but high inflation will persist because its cause is monetary.

If not worse. Maybe much worse.

I think that all those economists and pundits who equate inflation with economic strength are going to pay heavy prices for pretending that the stagflation of the 1970s never happened.

Sadly, so will all the people blindsided by this colossal error.

Longtime readers know I don’t like making grand predictions. But if I’m right, it seems to me that there should be signs of incipient stagflation by the end of this year. That trend should become much clearer in 2022.

I see two main alternatives to my base case:

What if I’m just too cynical? Maybe alternative #3 is that TPTB fix not just the US, but the global economy. The world is on the verge of a new golden age of stable, prolonged economic growth…

Well, I think the chances of this (as Doug likes to say) are slim to none—and Slim’s out of town.

Key Point: conventional economic thinking pushed by the Fed is causing many investors to make the mistake of selling the world’s best inflation hedge—gold—in the face of rising inflation.

This, I do see as transitory.

And that makes the chance to buy great gold—and silver—stocks while they’re on sale an opportunity not to be missed.

P.S. I also see the correction in copper and other commodities as an opportunity. Yes, China has released stockpiles to combat high prices, but that’s not sustainable. And, like the tango, it takes two to set a price. China alone can influence, but not control prices. Absent a deflationary depression—which I see as extremely unlikely—I’m very bullish on all commodities. Anything real should do well if my base case expectations are met.