Could I Be Missing Something? 4+ Bear Potential Cases Against Gold and Silver

Novelist-philosopher Ayn Rand famously admonished us to “check our premises.” That’s a fancy way of saying that it pays to ask ourselves if we might be missing something—especially when confronted with a situation that makes no sense.

The nonsensical investment reality of the day is that signs of rising inflation are causing the price of gold—the world’s best inflation hedge for thousands of years—to fall.

I’ve explained why this is happening several times: nominal rates are rising in response to expectations of higher inflation faster than CPI. Anyone can look at their budget over the years and see that official CPI is bunk, but it’s the number policymakers, businesses, and most investors use.

This doesn’t worry me because I think CPI will catch up with gusto. We may see both gold and nominal rates rising at the same time as real rates fall. We’ve seen this before, notably after the crash of 2008.

It all makes twisted sense. I can “buy the dips” with confidence—as I just did on several gold stocks and one uranium stock—last week.

But what if I’ve missed something important?

Independent thinking and the discipline to stick with one’s convictions are prime virtues for successful speculators.

Cocky overconfidence is not.

Yes. The most recent US CPI figure is for February. As of yesterday's close, nominal rates on the benchmark US 10-year note are up 19.4% since then.

Has this apparent increase in real rates been bearish for gold?

Yes. At least on a day-to-day basis, we see gold and the nominal rate (standing in for real rates until new inflation numbers can be factored in) moving strongly inversely. 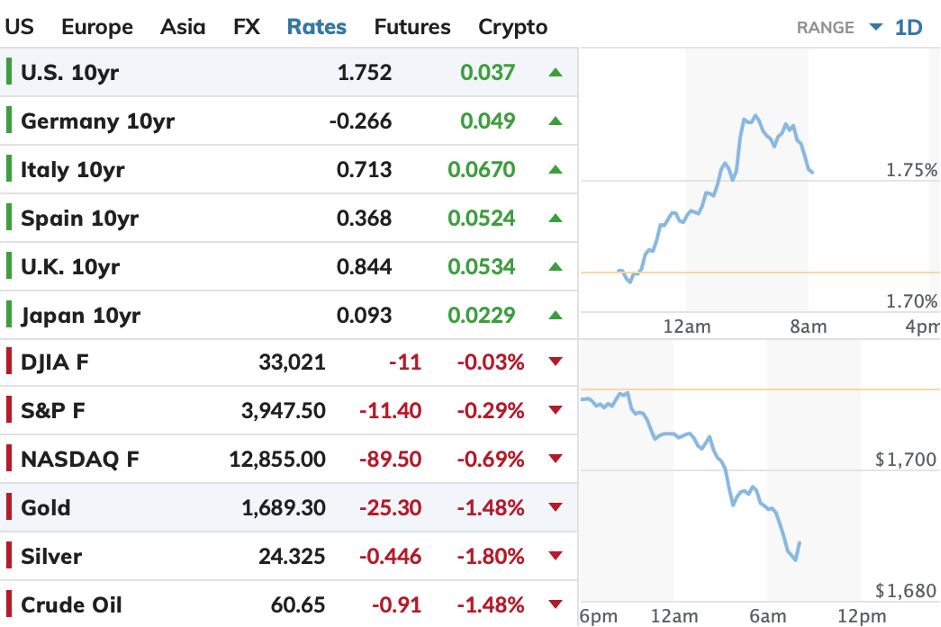 We also see it longer term, which I’ve charted before. 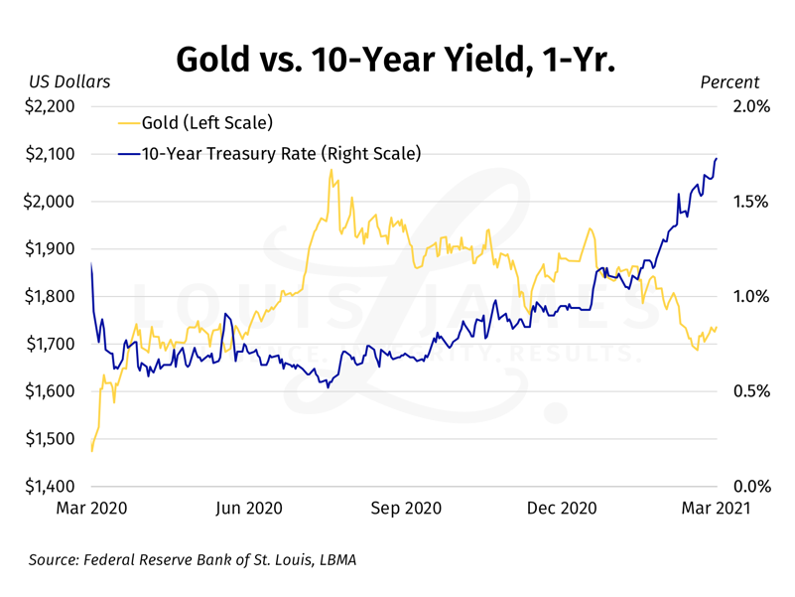 Interestingly enough, gold's close yesterday was up $5.80 per ounce over the beginning of March, the period when presumptive real rates have risen 19.4%.

My explanation for this has been that some investors are starting to weigh inflation expectations more heavily than CPI, which is always a lagging number (even if one believes it’s accurate).

So, are inflation expectations rising?

Yes. I have no idea what Fed Chair Powell is thinking when he says that inflation expectations are “well anchored” at 2%. Well, actually, I do; I think he’s looking at long-term averages. But if so, that’s a deliberate choice not to look at the current trend. This has recently taken expectations over 3%—and is rising fast. 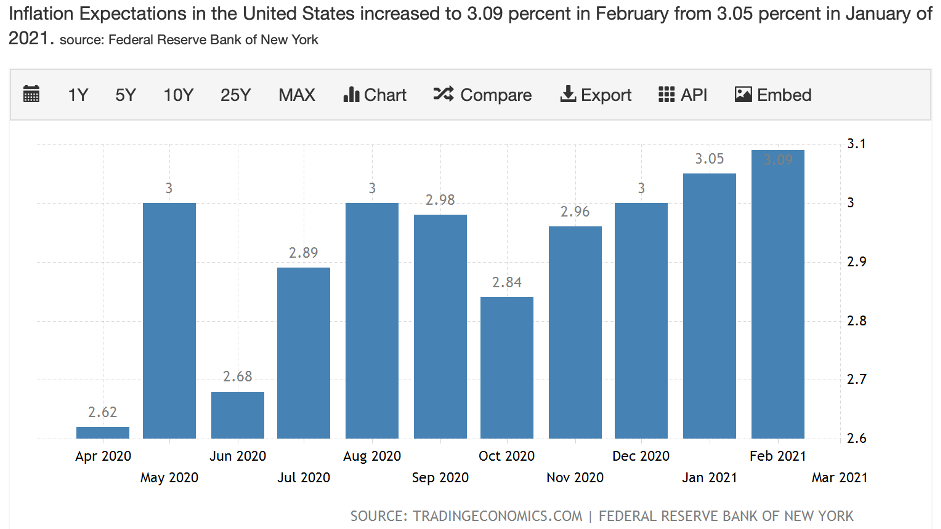 So, my thesis seems well supported by the most relevant data.

Could I be missing something else that’s not part of this argument?

Well, I asked my ever-helpful audience on Twitter and got many suggestions. (Note that my Twitter “channel” includes some very sharp fellow travelers; I do encourage all to follow me on Twitter—especially those who’d like to hear from me on a daily basis.)

Crowdsourcing can be great… with the right crowd.

Here are the top bear cases for gold that were brought up as challenges:

I do think there is something to this, in that highly liquid capital chasing after the flavor of the day can easily slosh back and forth between Bitcoin and gold, depending on which is rising faster at the time.

But I also think that, despite some high-profile cases, Bitcoin has attracted mainly new investors so far. I’ve also asked readers, and I’d say that the percentage of gold investors who’ve actually sold any gold or gold stocks to buy cryptocurrencies is on the order of 1%.

Last I saw, Bitcoin’s total market valuation was around $1 trillion, while gold’s is around $10 trillion. If, for the sake of argument, we assume that half the money in Bitcoin is money that would have gone into gold, it would be significant, but still only a 5% ding against gold.

Prices being determined at the margins, this 1% or 5% could be a headwind, but I think either would get blown away the next time gold becomes the flavor of the day.

Also, since both gold and Bitcoin are alternatives to the US dollar, it makes sense that they should generally rise together as the USD loses value. It turns out that if you smooth out the daily noise, this is so. Bitcoin is a correlated asset after all—with gold.

The fact that Bitcoin has risen faster than gold at times does not undo the fact that since Bitcoin’s inception, it and gold have generally moved up together.

This makes sense to me. I’ve long argued that the crypto crowd is doing gold a huge favor by educating entire generations about the dangers inherent in fiat currencies.

In short, I do think Bitcoin matters, but I don’t see it as gold’s doom at all.

My economic view is Austrian: free markets and hard money. But in this era of fractional reserve banking systems and massive government interventions in the economy (via fiscal as well as monetary policy—and regulation), the inflation we experience is more complicated than just money supply.

This is a big topic, but the velocity of money is a key variable. If it drops faster than money is created, it’s possible to have money-printing and deflation at the same time.

This is critical at this particular time because The Powers That Be (TPTB) have flooded banks with liquidity, but banks have been reluctant to lend. That’s been a major brake on the velocity of money since the COVID-19 outbreak. And whatever any of us may think about COVID-19 statistics and policy, policymakers are certainly responding to the latest surge. 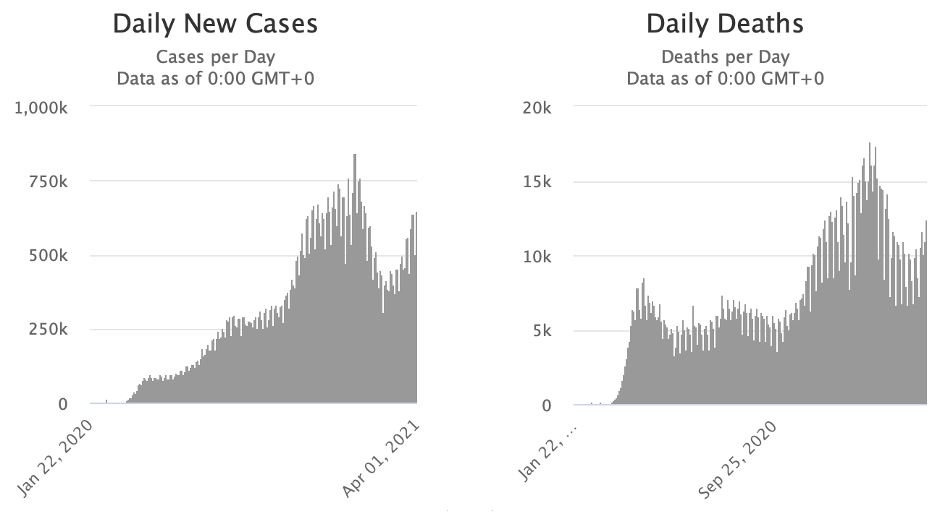 France and Italy have just announced new lockdown measures. Places like Brazil are reporting huge numbers. The US is hoping to continue reopening—and I sincerely hope it does—but I’m sure US politicians will lock things down again if the numbers get scary.

I’m not predicting this, just saying that I recognize the threat. Even without a new lockdown, the lasting effects of what’s already been done seem likely to be recessionary—perhaps for years to come. And sure, a protracted recession would exert deflationary pressure.

But this doesn’t have to result in actual deflation—and I don’t think it will. The Keynesians who keep insisting that deflation is the big threat we face keep forgetting that the 1970s happened. Stagflation is a real phenomenon. This is, in fact, my base-case economic outlook, after the post-lockdown surge (whenever that happens).

What makes me so sure?

Well, for one thing, the money-printing does matter, and it has been off the charts—even the post-2008 charts. Some argue that the US has been printing money like crazy since the GFC without creating high inflation and can therefore print all it wants now. This ignores the fact that what’s been printed over the last year is a massive break above previous money-printing. There is literally no similar event in the data. Claims that current money-printing doesn’t matter are not based on the data. 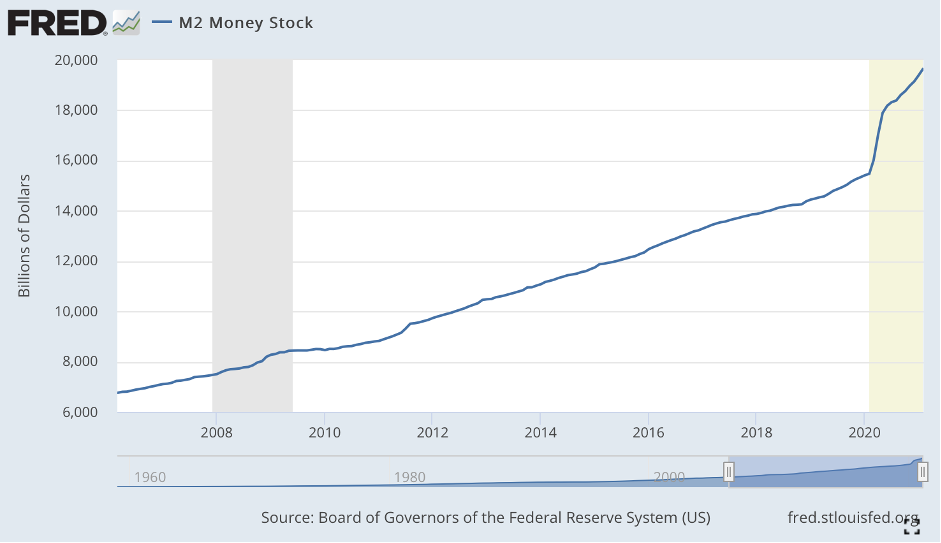 Also, it’s not just the banks that impact the velocity of money. The response of many individuals and households to the COVID-19 situation was to save money. That’s short-term deflationary as it reduces the velocity of money. So what happens when that goes into reverse? I’m sure it will—and not just based on a hunch. We’ve already seen the US savings rate decline after the first and second COVID-19 surges in the US. 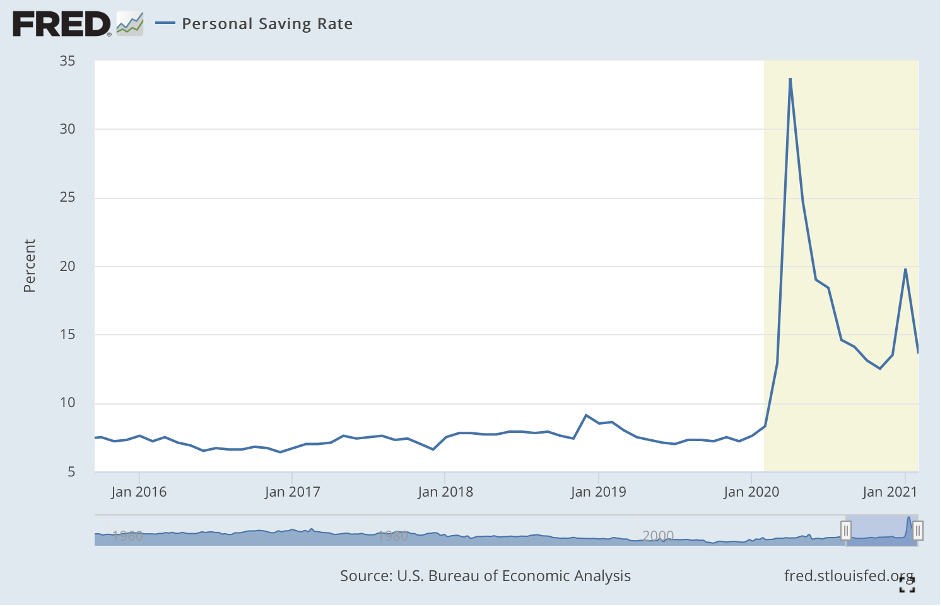 The savings rate is declining again now, but remains well above long-term averages. This makes it reasonable to expect a massive surge in spending once consumers decide the coast is clear.

And for whatever it’s worth, I just can’t see TPTB allowing deflation to happen. They’ve already shown that they have no fear of printing “as much as it takes” to make sure there’s no deflation. Hence my expectation of stagflation.

As I’ve said before, I do see plenty of manipulation in the gold and silver markets.

This doesn’t prove that it’s a central bank conspiracy. I have no problem believing that it may be so. But it’s precisely because I’m so skeptical of TPTB that I insist on high levels of evidence before I accept any theory regarding them. And simple greed among private sector baddies is another valid explanation for the trading data that so clearly smack of manipulation.

That gold “should” be higher now doesn’t negate the fact that TBPT haven’t been able to stop gold from rising when a major bull market gets going.

If manipulation is the main factor in gold and silver prices, the rational thing for investors and speculators to do would be to abandon these markets entirely.

Every single day one is in such a manipulated market, it’s possible that the bad actors will crash prices, causing us to take huge losses. Why on earth would anyone want to take such a risk?

If I had bought the “everything is due to manipulation” thesis, I would never have speculated as I have. I’d never have made the money I have.

And I’d miss out on the money I expect to make going forward.

Manipulation as an explain-all goes too far.

Several readers suggested various forms of the idea that there’s no fear on Wall Street, and that even on Main Street people have been placated with government checks. In such a risk-on environment, why should we be surprised to see gold drop?

This sounds reasonable, but it ignores the fact that from the Powell Pivot in late 2018 until last August, gold rose along with stocks on Wall Street. Both can be seen as signs of inflation.

It also ignores the mountain of evidence that shows that in our “modern,” government-run economies, real rates are the single most explanatory variable when it comes to the price of gold.

But suppose this is a big part of the “problem” with gold today. That would imply that the current relative weakness in monetary metals is a buying opportunity, ahead of the next time the needle swings back from greed to fear—which it always does.

Is There No Good Bear Case?

No argument I’ve seen has dealt a serious blow to my bull case.

I’ve been thinking about this, however, and I can see one credible threat in the near term…

We’ll get a new CPI number from the Bureau of Labor Statistics soon. But what if nominal rates have risen again by then—or even jump on that very news?

If nominal rates keep rising faster than CPI, that would keep gold prices under pressure.

This could happen next week. It may even be likely. And it could keep happening for several months.

But I don’t see this as a real bear case—just a potential source of opportunity for those with cash to deploy.

Another possibility would be a general market crash, such as we saw last March, or in 2008.

But this isn’t because monetary metals fail as safe havens. It’s because margin calls and the need for cash to reduce risk at the outset of these meltdowns create extreme liquidity crunches, forcing people to sell whatever they can to cover. In other words, these short-lived downward spikes show gold doing its job, serving as a source of savings in times of great need.

And when they do happen, they turn out to be spectacular buying opportunities for those fortunate liquid enough and courageous enough to buy when others are selling.

Yes, gold and silver dropped sharply during the most acute moments of the liquidity crunches in 2008 and 2020—but remember what happened to them just afterward.

Please understand that these are “forward-looking statements.”

I can’t prove them.

But they are what I think.

And I’ve been speculating accordingly with my own money.