A Critical Moment for Uranium?

A slew of new reports on old news about Donald Trump’s Nuclear Fuel Working Group (NFWG) is hitting the wires today. That’s because the NFWG is supposed to report its recommendations by next Monday. 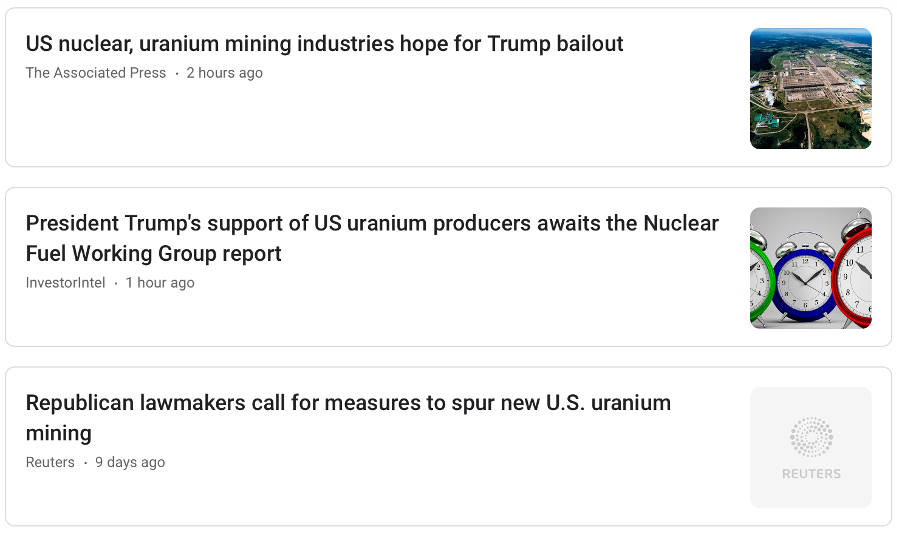 I haven’t seen anything of substance that’s new in these reports, but the reminder of the deadline is apparently enough to boost share prices in related uranium stocks today—despite uranium prices having ticked down to $24.88 per pound at last quote.

As a reminder, the setting is this:

On top of the base-case scenario, there’s the Section 232 saga, which goes like this:

This brings us to today, four days before the NFWG report is due. It’s interesting to see that while the most likely beneficiaries of anything Trump does to boost US uranium production aren’t soaring the way they did before, they are up as I type, with no company-specific news.

Now, I can’t promise that the NFWG will deliver a big boost to US uranium plays next week, but that is a possibility. They could even put quotas and tariffs back on the table. More likely, they’ll recommend executive actions that wouldn’t directly harm US power utilities while helping uranium miners. Ordering the US military to increase its uranium stockpiles and buy from domestic sources would be an example. Some GOP politicians have asked the EPA to reduce the regulatory burden on uranium exploration in the US—that’s something Trump could easily encourage. He could also offer new subsidies and tax breaks.

What I think is unlikely is that the NFWG will recommend taking no action. It’s extremely rare for any government body to be asked to “do something” and decide not to do nothing and let the market take care of things. I can’t see Trump bothering to set up the NFWG if he didn’t want to take some sort of action.

But remember: there is no law that compels Trump to take action within any specific amount of time after the NFWG reports.

So it’s a speculation on my part, to be sure, but I do think the odds favor the NFWG recommending action to boost US uranium production. That may or may not happen next week, but I think it will happen soon. And I think Trump will have been briefed and won’t take long to decide on what to do.

Well, remember the base case presented above…

Suppose the NFWG recommends no action. Laissez faire! Great. It still dispels the uncertainty about what the US may require of its utilities, which would bring their buyers back to the negotiation table with producers.

Even the worst-case outcome of the NFWG for US producers would still bring about the end of a major source of uncertainty holding the global uranium market back today. Uranium would be free to resume its march toward higher prices.

Or suppose the NFWG drags on forever, and Trump never makes a decision. At some point, the utilities will have to start buying anyway. Their spreadsheet guys will tell them their inventories are unacceptably low, and they will buy at whatever price is required to secure reliable supply.

Sooner or later, the buyers have to come back to the table—and the ask from the miners is going to be on the order of 100% above current spot uranium prices.

One size does not fit all.

Say you’re tired of uranium prices refusing to go where uranium bulls have been saying they will for years and have given up hope. You may want to use any bump we see in share prices before October 14 as an exit.

If you’re bullish on uranium but skeptical the US will do anything to support US uranium plays, you should consider buying the best uranium picks around the world while they’re still relatively cheap. They should do well in time, whatever Trump does.

Since I do think the US will do something to support US production and since the relevant US plays were so brutally smacked down in July, I’ve put my own money into what I see as the best of them. I hope to bag some big wins in the near term with these stocks. But even if not, I expect them to deliver in time, due to the base case I started with above.

If you’d like to know which specific stocks I think offer the most leverage, please subscribe to The Independent Speculator, where you’ll find more in-depth analysis of each.

But whether you’re a bull or a bear, you now have my take on this situation for free. I just hope you’ll remember if I get it right.