A Bear Case Against Gold

I’m extremely bullish on monetary metals: gold and silver. But I remember being almost as bullish in 2012, when monetary metals had peaked and started their long, painful descent that lasted until late 2015. Not wanting to make the same mistake twice, I’m always asking myself if there’s a reasonable bear case I might be missing. And I think I’ve found one.

I have NOT turned bearish.

But I do see a set of circumstances that could knock gold prices back even more than they already have been, and possibly keep them under pressure for years.

First let me say that I understand that the US is not the only country in the world. This look forward focuses on the US because the fate of the US dollar—the world’s reserve currency—is so vital to that of monetary metals.

Now, imagine that COVID-19 had never happened. I maintain that 2020 would still be a great year for gold. If we look at it with a trend line starting with the Powell Pivot in late 2018, we can project a price that would not yet have reached $2,000, but would be above current prices. 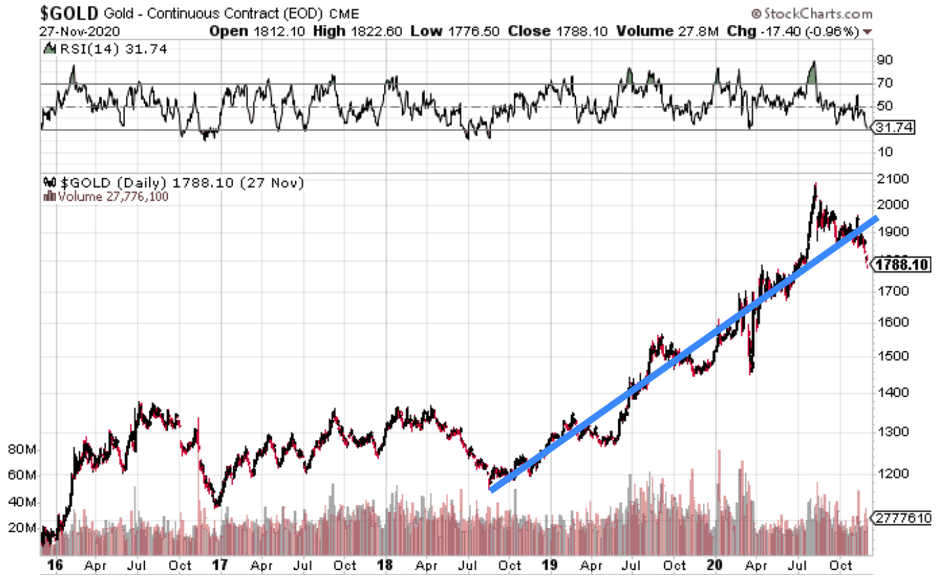 This chart illustrates what I mean when I say that gold and silver aren’t up in 2020 because of COVID-19. Vaccine news should not be seen as relevant. (By the way, technicians might note that the RSI, MACD, and slow stochastics all say gold is oversold at present.)

However, because of COVID-19, the Fed dropped rates faster than it would have done otherwise. Congress doled out easy money faster and in greater quantities as well.

Potentially years worth of monetary debasement was pulled forward into 2020.

Now imagine that was the end of the story. With the dread disease is defeated, Congress cuts back on the flow of easy money. The economy booms because of the massive amounts of liquidity already injected. The Fed might even think about thinking about possibly raising rates someday.

A major reversal of monetary and fiscal policy—a post-COVID-19 pivot—would be bearish for monetary metals… possibly for years.

But is this likely?

Both the Trump and Biden camps have big plans for more government handouts and spending. If the GOP holds on to the US Senate, that may put a damper on those plans, but I very much doubt it would stop the flow of easy money.

More important is that the story has not ended yet. As the rising tide of shutdowns, layoffs, and bankruptcies surges this winter, the pressure on US authorities to “do something” will be irresistible.

I don’t like making big bold predictions, but I will be truly surprised if we don’t see more easy money after the new Congress is sworn in.

But what then? The next batch of handouts from Washington might extend the trend on the chart above another few months, but what if the easy-money firehose shuts down after that?

Well, I don’t think that trillions of dollars at a whack can continue long after the emergency appears to be dealt with. But I’d more expect handouts and government spending over the next four years if even some of the Biden/Harris agenda is implemented.

Also, don’t forget that the Fed has said it will be years before it starts raising rates. Near-zero nominal rates make monetary metals much more attractive to investors. Negative real rates have a highly inverse correlation with gold prices. 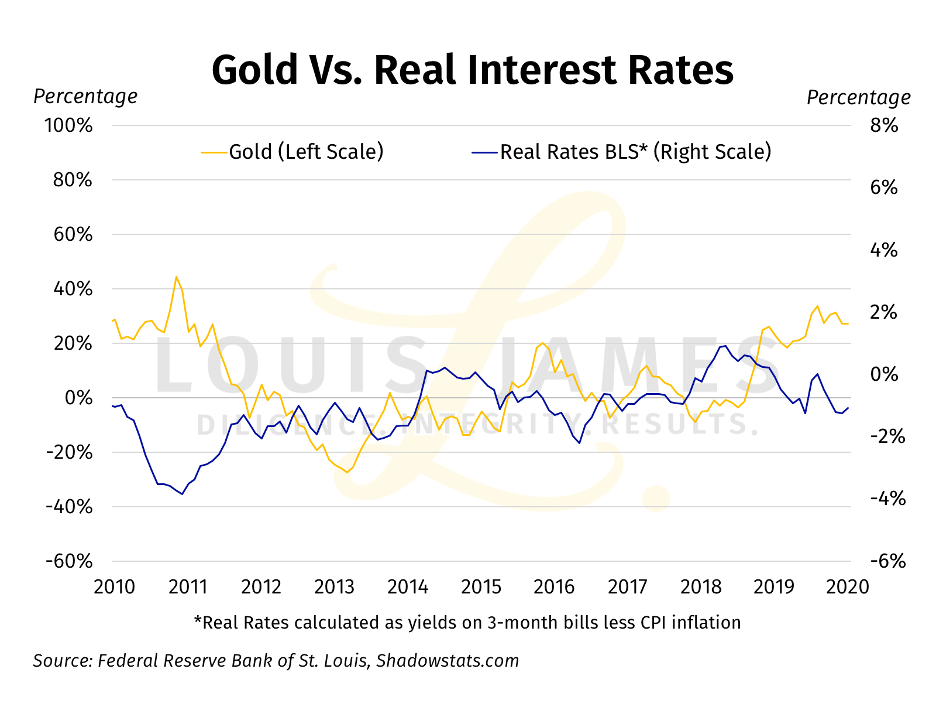 Key point: if all the money printing does increase inflation, the Fed has said it will let inflation overshoot—dropping real rates even lower, which is very bullish for gold.

These factors make it hard for me to be seriously bearish about gold.

But I don’t want my fundamentalist theories to make me so sure I’m right, I refuse to consider any hypotheses—or data—that contradict my views. I want to look at the physical, political, and financial world today as objectively as I can.

Unfortunately, not everyone else does. Markets are famous for overreacting—and staying irrational longer than investors can remain solvent.

I can easily imagine that perception that the “wicked witch of COVID-19 is dead” would be a headwind for gold and silver until the news cycle moves on.

I say I want to look at the data, not just my theories. What data might persuade me to reconsider placing large, bullish bets in front of a potentially long and deep bear market for monetary metals?

Well, changes in the fundamentals would certainly change my thinking. Hence my thought experiment for a potential bear case above. If there is no more emergency COVID-19 money coming from Congress, that would remove a tailwind. If the Fed pivots to a more hawkish stance, that would be a strong headwind.

As for price data, a “death cross” in the 50- and 200-day moving averages was a clear bearish signal the last two times it happened. 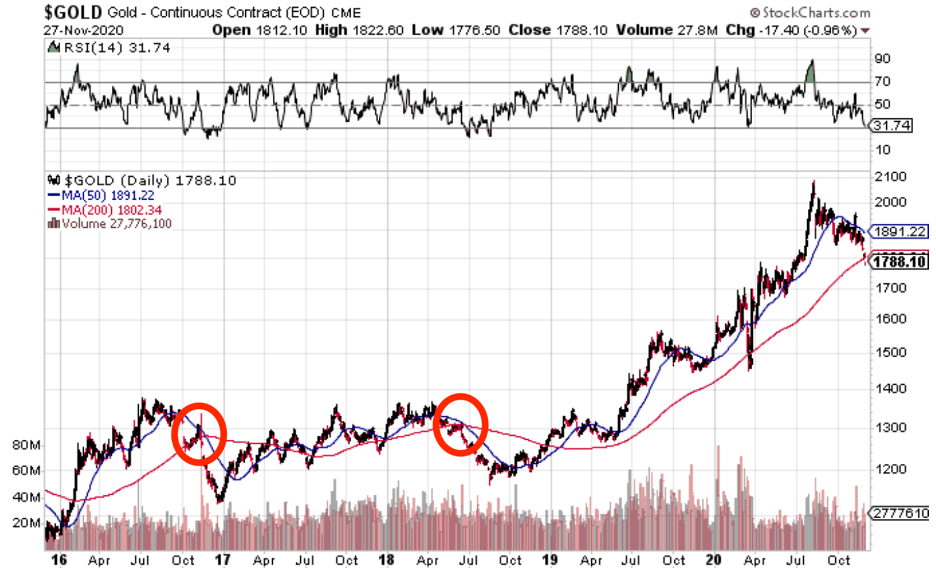 Note that both of these death crosses preceded dips that came before significant upturns—with the most recent one being a huge rally.

If we look at a similar chart going back decades, we see many times when such death crosses would have had us miss out on major rallies. The only time in recent years when it would really have been unmistakably good to get out of gold-related investments was after the death cross in early 2013. Well, the death cross in 2008 did signal a major retreat. But that was so short lived, lots of people did just fine ignoring it. Many—including many of my readers—did even better buying the dip.

To find another death cross like the one that preceded a multi-year bear market for gold in 2013, we have to go back to 1996.

This makes me reluctant to sell my gold and silver stocks just because prices have dropped.

And I don’t sell gold at all based on price. I only dip into my savings in bullion in time of great need—or opportunity.

So, what would it take to cause me to make a major shift away from gold and silver stocks in my portfolio?

Price alone wouldn’t do it. I’d hate to miss another buying opportunity such as we saw in 2008—or last March.

Real changes in monetary fundamentals plus sustained lower price trends would make me favor other speculative investments over gold and silver.

Short of that, I intend to buy on weakness.